Ukrainian President Volodymyr Zelenskiy called on Saturday for comprehensive peace talks with Moscow and also urged Switzerland to do more to crack down on wealthy Russian oligarchs who he said were helping wage war on his country with their money.

British intelligence meanwhile warned that Russia, frustrated by its failure to achieve its objectives since it launched the invasion on February 24, was now pursuing a strategy of attrition that could intensify the humanitarian crisis. 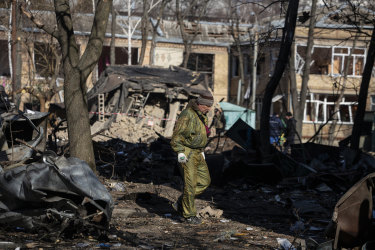 The site of a bombing that damaged residential buildings in Kyiv, Ukraine. Credit:Heidi Lev

Russian forces have taken heavy losses and their advance has largely stalled since President Vladimir Putin launched the assault, with long columns of troops that bore down on Kyiv halted in its suburbs.

But they have laid siege to cities, blasting urban areas to rubble, and in recent days have intensified missile attacks on scattered targets in western Ukraine, away from the main battlefields.

Zelenskiy, who makes frequent impassioned appeals to foreign audiences for help for his country, told an anti-war protest in Bern that Swiss banks were where the “money of the people who unleashed this war” lay and their accounts should be frozen.

Ukrainian cities “are being destroyed on the orders of people who live in European, in beautiful Swiss towns, who enjoy property in your cities. It would really be good to strip them of this privilege,” he said in an audio address.

Neutral Switzerland, which is not a member of the European Union, has fully adopted EU sanctions against Russian individuals and entities, including orders to freeze their wealth in Swiss banks.

The EU measures are part of a wider effort by Western nations aimed at squeezing Russia’s economy and starving its war machine.

“I want everyone to hear me now, especially in Moscow. The time has come for a meeting, it is time to talk,” he said in a video address. “The time has come to restore territorial integrity and justice for Ukraine. Otherwise, Russia’s losses will be such that it will take you several generations to recover.” 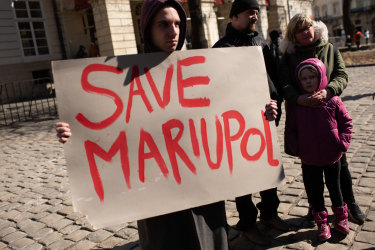 Ukrainians take part in an action in support of the residents and defenders of Mariupol.Credit:

Britain’s Defence Attaché to the United States said British intelligence believes Russia has been taken aback by the Ukrainian resistance to its assault and has so far failed to achieve its original objectives.

“Russia has been forced to change its operational approach and is now pursuing a strategy of attrition” likely to involve the “indiscriminate use of firepower resulting in increased civilian casualties”, Air Vice-Marshal Mick Smeath said in a statement.

Putin, who calls the action a “special operation” aimed at demilitarising Ukraine and purging it of “Nazis”, told a rally on Friday in Moscow that all of the Kremlin’s aims would be achieved.

On Saturday, Russia said its hypersonic missiles had destroyed a large underground depot for missiles and aircraft ammunition in the western Ivano-Frankivsk region. Hypersonic weapons can travel faster than five times the speed of sound and the Interfax agency said it was the first time Russia had used them in Ukraine.

A spokesperson for the Ukrainian Air Force Command confirmed the attack, but said the Ukrainian side had no information on the type of missiles used.

Ukrainian authorities said on Saturday they had not seen any significant shifts over the past 24 hours in front line areas, noting the cities of Mariupol, Mykolaiv and Kherson in the south and Izyum in the east continued to see the heaviest fighting.

Ordinary Ukrainians have joined the effort to defend their country, such as at a training facility in Odessa, a picturesque, multicultural Black Sea port, where young urban professionals were learning about handling weapons and applying first aid.

“Every person should know how to fight, how to make medicine,” said 26-year-old graphic designer Olga Moroz. 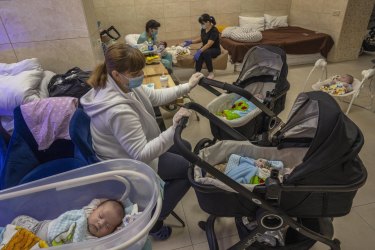 Nannies take care of newborn babies in a basement converted into a nursery in Kyiv.Credit:

More than 3.3 million refugees have fled Ukraine through its western border, with around 2 more million displaced inside the country. Ukraine has evacuated 190,000 civilians from frontline areas via humanitarian corridors, Deputy Prime Minister Iryna Vereshchuk said on Saturday.

“I’ll go (to Germany) for three weeks but I hope I can go home after that,” said Olga Pavlovska, a 28-year-old refugee in the Polish town of Przemysl, hoping Zelekskiy’s calls for comprehensive peace talks will end the invasion.

Hundreds of thousands have been trapped in the port city of Mariupol for over two weeks with power, water and heat supplies cut off. Bodies amid the rubble are a common sight. Local officials say fighting has reached the city centre and heavy shelling kept humanitarian aid from getting in.

The Ukrainian prosecutor general’s office said on Saturday that 112 children had been killed since the invasion began.

Russia last acknowledged on March 2 that nearly 500 of its soldiers had been killed and has offered no updates since. Ukraine says the number by now has reached many thousands. Reuters has not been able to independently verify the death toll.

Interfax quoted Russian Foreign Minister Sergei Lavrov as saying Moscow expected its operation in Ukraine to end with a signing of an comprehensive agreement on security issues, including Ukraine’s neutral status.

Kyiv and Moscow reported some progress in talks this week towards a political formula that would guarantee Ukraine’s security, while keeping it outside NATO, though both sides accused each other of dragging things out.