A different style was on display March 11 as a crowd of reporters, voters and nervous provincial apparatchiks waited outside a voting station in the central city of Santa Clara for Miguel Mario Diaz-Canel Bermudez, the Communist Party official widely expected to take Castro's place as Cuba's next president this week. 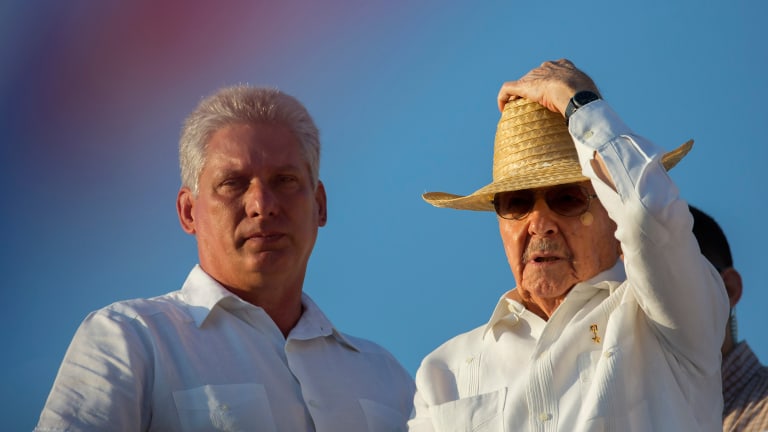 An hour passed, then another. Suddenly, the crowd stirred. A half block away, a tall, bulky figure in an untucked white button-down shirt walked with his wife and a few bodyguards down the street toward the polling station. Shaking hands and hugging voters, Diaz-Canel took his place in line.

"We're building a relationship between the government and the people here," he said after voting for members of Cuba's next National Assembly. "The lives of those who will be elected have to be focused on relating to the people, listening to the people, investigating their problems and encouraging debate."

Then Diaz-Canel left for Havana, ending an unusual bit of political theatre neatly scripted to send a single message: A new type of Cuban president is coming.

Castro has pledged to step down Thursday and hand the presidency to the man he named in 2013 as his first vice president.

Diaz-Canel, who turns 58 on Friday, would be the first non-Castro to hold Cuba's top government office since the 1959 revolution led by Fidel Castro and his younger brother Raul. He will confront a stagnant economy, decaying infrastructure, a hostile U.S. administration and widespread disenchantment with a centrally planned system that can't provide state employees with a living wage, but forbids most forms of private enterprise. 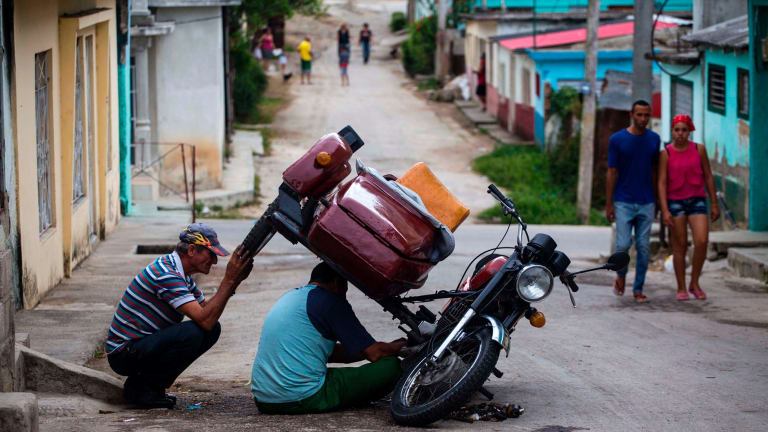 Men repair a motorcycle in the Vigia neighbourhood of Santa Clara, Cuba, the home town of the man who is expected to be Cuba’s next president.

Raul Castro will remain first secretary of the Communist Party, a potentially more powerful position. And since power in Communist Cuba has long flowed from personalities more than institutions, how much influence Diaz-Canel will actually wield is an open question that has many observers looking at his past for clues.

Most Cubans know their first vice president as an unremarkable speaker who initially assumed a public profile so low it was virtually nonexistent. Until March, Diaz-Canel had said nothing to the Cuban people about the type of president he would be. The white-haired, unsmiling Diaz-Canel had been seen at greatest length in a leaked video of a Communist Party meeting where he sombrely pledged to shutter some independent media and labelled some European embassies as outposts of foreign subversion.

That image has begun to change slightly this year as Diaz-Canel stepped into the moderate limelight offered by Cuba's Soviet-style state media. With his public comments in March, many Cubans got a glimpse of him as a flesh-pressing local politician, an image familiar to residents of the central province where he was born and spent nine years in a role akin to a governor.

Raised and educated in the city of Santa Clara, Diaz-Canel graduated from the local university in 1982 and performed three years of obligatory military service. In 1987 he joined the Young Communists' Union. He also went on to work as a professor of engineering at the University of Santa Clara and travelled to Nicaragua as part of a government-run mission to support that country's socialist revolution. 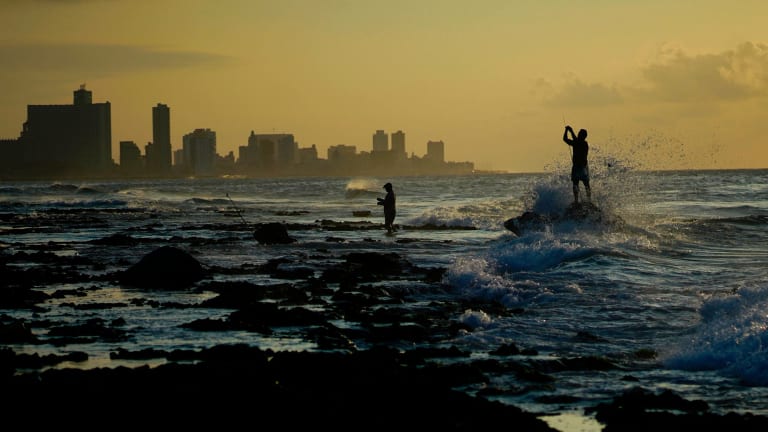 Fishermen prepare their fishing rods on Chivo beach as the sun sets in Havana, Cuba.

Santa Clara residents remember him wearing his hair long and openly admiring the Beatles, who were frowned on by ardent communists who considered the group as representative of the decadent culture of Cuba's capitalist enemies.

Nonetheless, the young professor was named first party secretary in Villa Clara province in 1994 and gained a reputation as a hard-working public servant with a conspicuously modest lifestyle. Residents told The Associated Press this month that Diaz-Canel was the first official they remembered who didn't move to a new government-provided home after accepting the position of first secretary.

"He didn't even fix up his house to live more comfortably," said neighbour Roberto Suarez Tagle, 78. "He always found out about the real problems that people had."

Diaz-Canel travelled the city on a bicycle during the economic crisis spawned when the fall of the Soviet Union cut off subsidies for Cuba, and he accepted visits at all hours at his home and office from residents with complaints or suggestions. When he finished work, residents said, he would start his shifts with the local Committee for the Defense of the Revolution, a mix of a neighborhood watch committee and local militia.

"Some comrades didn't want to put him on watch because he would be overwhelmed with work, but he would say, 'I'm a citizen of this country and I'll stand watch like anyone else,"' said Liliana Perez, whose house faces the red-and-yellow-painted home where Diaz-Canel lived with his wife and two children.

In 1996, he began appearing on a local radio program during which he would take two hours of live phone calls from people complaining about problems ranging from bad state restaurants to pothole-rutted side streets, radio journalist Xiomara Rodriguez said.

"He undertook an intense effort to communicate with the people," Rodriguez recalled.

In a country where the state controls most daily activities, Diaz-Canel also made surprise visits to government-run establishments such as the local funeral parlour to check on the quality of services.

"He focused on creating a culture of attention to detail," Rodriguez said. 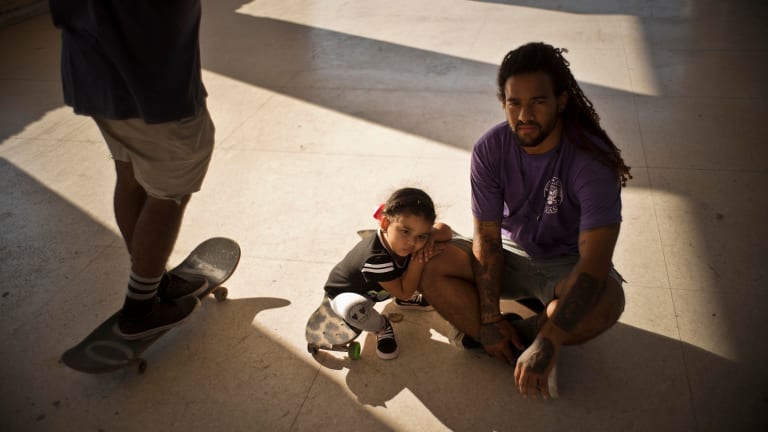 Yojany Perez, 28, and his daughter Coraline Perez Padilla. Perez, who has an economy degree but works in maintenance, said with the arrival of a new Cuban president, people are expecting an improvement in the economy.

Diaz-Canel also became known for pushing back against the intolerant tendencies of the Communist Party, an organization with strains of deep social conservatism and conformity.

As first secretary of Villa Clara, he was an active supporter of El Menjunje, a cultural center that hosted rock 'n' roll shows and became a focus of activities by lesbian, gay, bisexual and transgender Cubans, including some of the country's first drag shows. Diaz-Canel was known for bringing his children to the club, an unusual assertion of support in a society with deeply rooted antipathy toward homosexuals.

Two of Diaz-Canel's children have gone on to play in Polaroid, a well-known Cuban rock band.

"Diaz-Canel listens and takes note of others' opinions," said Ramon Silverio Gomez, the longtime director of El Menjunje. "The people respect him and know that he's understanding them."

In 2003, Diaz-Canel was named first secretary of the eastern province of Holguin, where he ran into complaints.

Some say he focused too much of his six years in office on beautifying the city center while neglecting the needs of poor and working people.

"In my opinion you can't spend so much on boulevards and parks when there are people in marginal neighborhoods living hand-to-mouth," said Anahi Tamayo, a waitress at a private snack bar. 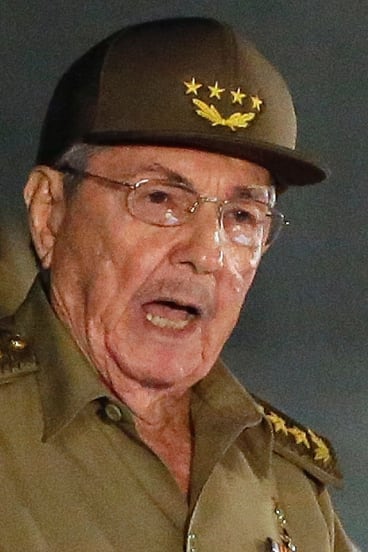 In 2003, Diaz-Canel was also named to the Communist Party's Politburo, one of its highest-ranking bodies. Six years later, he was named minister of higher education and was praised for modernizing curricula and introducing computer technology to many university programs. He was also known as one of the first high-ranking officials to bring a laptop to government meetings.

In 2012, conservative Communist Party officials shut down "Young Cuba," a blog run by young academics at the University of Matanzas who supported Cuba's socialist system but who criticized corruption, inefficiency and resistance to change.

Diaz-Canel called a meeting between the university rector and the blog's founders and pointedly asked them, "What do you need to keep running 'Young Cuba?"' recalled founder Harold Cardenas, a young professor of Marxist studies.

The blog was unblocked and remains an important forum for debate among Cuban intellectuals calling for gradual reform.

"I talk to Diaz-Canel like he was an uncle of mine," Cardenas said. "He's much more communicative than he seems."

Diaz-Canel also intervened when a government official denied a travel permit to the U.S. for Humberto Rios Labrada, a sustainable agriculture expert who won the U.S-based Goldman Environmental Prize, said Gregory Biniowski, a Cuba-based Canadian lawyer who nominated Rios Labrada for the honor.

As first vice-president he has mostly stayed out of view, but many observers see that as a wise strategy for survival in a system run by aging revolutionaries who have ended the careers of many young politicians who rose to prominence early in their careers. Outside a few bases of support, however, Diaz-Canel has also been left without a deep pool of goodwill to draw on in times of difficulty or conflict.

"It will no longer be enough to read from the documents written and approved by the party. He'll need to express ideas," said Jose Raul Viera Linares, a former first deputy minister of foreign affairs.

"It's not enough to be an administrator anymore. Inevitably he must evolve to become a leader."