While doctors were unsure of a definitive diagnosis, Alfie was in a semi-vegetative state for over a year and was thought to have a similar mitochondrial condition to Charlie Gard…

What was wrong with Alfie?

Alfie Evans had been living in a coma for well over a year after being struck down with a mystery illness.

He started making "jerking, seizure-like movements" and was taken to the doctors, but his parents were told he was "lazy and a late developer", the family claim.

But he caught a chest infection that caused seizures and was placed on life support at Alder Hey Children's Hospital in Liverpool in December 2016.

The 23-month-old's parents broke the news that Alfie had lost his battle for life to their Alfie's Army supporters on Facebook on April 28, 2018, confirming the tot passed away at 2.30am.

Devastated dad Tom Evans, 21, said: "My gladiator lay down his shield and gained his wings at 02:30… absolutely heartbroken… I LOVE YOU MY GUY".

Alfie's mum Kate James wrote: "Our baby boy grew his wings tonight at 2:30 am. We are heart broken. Thankyou everyone for all your support".

What was the degenerative neurological condition he suffered from?

Alfie had a degenerative neurological condition doctors had not definitively diagnosed.

Some experts believed he might have a mitochondrial condition – the same as Charlie Gard – and Alfie was described as being in a semi-vegetative state.

Mitochondrial DNA depletion syndrome (MDS) refers to a group of disorders that cause affected tissues to suffer from a significant drop in mitochondrial DNA.

The DNA is found in the mitochondria of cells – an organelle found in most cells in which respiration and energy production occur.

This means that sufferers do not get energy to their muscles, kidneys and brain.

The condition is rare and Charlie is said to be one of only 16 people to have ever had the condition.

MDS is almost always fatal in babies and young children, although some sufferers have made it into their teenage years.

There is currently no cure but some treatments have shown a reduction in symptoms – one of which is Nucleoside bypass therapy. 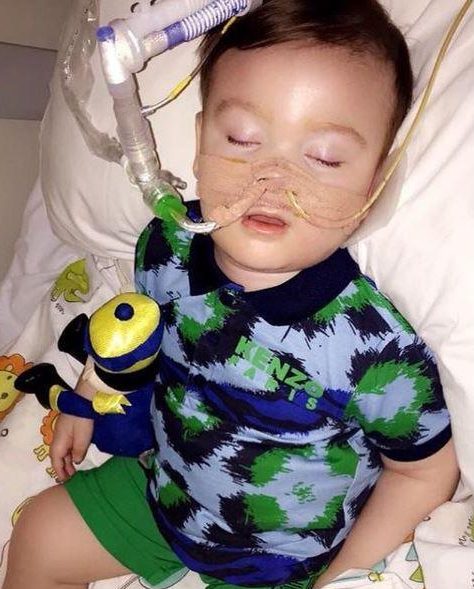 What are the symptoms of MDS?

Symptoms of MDS usually develop before a baby is a year old.

The disease can cause the slowing down of thoughts and a reduction in physical movement, hearing impairment and seizures.

Other symptoms include problems with blood glucose levels, persistent vomiting and a failure to thrive when babies are in their first year of life.

The NHS says a lack of energy is a common symptom on the outside, but MDS can cause "any symptom, in any organ, with any degree of severity, at any age", with those affected gradually losing the ability to eat, smile, communicate, swallow and breathe.

But many of the symptoms are common to other diseases so MDS can often be hard to diagnose.

What happened to Alfie's brain?

According to the Liverpool Echo, the vast majority of white matter in Alfie’s brain was wiped out.

Doctors said Alfie suffered significant brain damage because of the progressive, degenerative condition which left his brain mostly as water and spinal fluid.

Since then, according to the paper, “destructive” changes destroyed the pathways which regulated the vital “control structure” in his brain, which are responsible for processing any information, from touch to sound, taste and smell.

Experts said it also affected the area responsible for being awake and responsive.

A scan referred to in court showed that only around 30 per cent of the white matter, “or perhaps less”, remained in Alfie’s brain.

How brave Alfie battled his illness

9 May 2016 – Alfie is born in Liverpool to parents Tom Evans and Kate James.

1 December 2016 – Alfie is taken to Alder Hey Children's Hospital after suffering seizures. He will spend the next 12 months there.

11 December 2017 – The hospital and family disagree over Alfie's treatment, with his parents saying that the hospital applied to the High Court to remove parental rights and withdraw ventilation.

19 December 2017 – The High Court case begins with Mr Justice Hayden saying he will make a decision on what is best for Alfie.

1 February 2018 – A hearing begins at the High Court in Liverpool in which lawyers acting for the hospital claim further treatment for Alfie is unkind and inhumane.

2 February 2018 – One of Alfie's doctors tells the judge there is "no hope" for the youngster, who is in a semi-vegetative state from a degenerative neurological condition doctors have not been able to definitively diagnose.

20 February 2018 – Mr Justice Hayden rules in favour of the hospital and accepts medical evidence that further treatment would be futile.

28 March 2018 – The European Court of Human Rights also rejects a request from the family to intervene.

16 April 2018 – Alfie's parents argue he is being wrongly "detained" at Alder Hey and make a habeas corpus application. Judges at the Court of Appeal in London rule against them.

20 April 2018 – The Supreme Court rules against Alfie's parents for a second time.

23 April 2018 – The ECHR rejects a last-ditch appeal. Supporters storm the hospital. Alfie is granted Italian citizenship. His life support is turned off at 9.17pm.

24 April 2018 – Alfie is still breathing on his own and has had oxygen and water, his father tells supporters.

25 April 2018 – Alfie's parents lose their appeal to take the tot to Italy for further treatment.