THE "world's worst boss" sent out a furious email to all his staff for taking "sick days" and not wearing a suit.

A Sydney boss has apologised for the email that repeatedly accused his employees of “getting on my tits”, playing “endless ping pong” and likened their taking frequent sick leave to a film about a man dying of Aids. 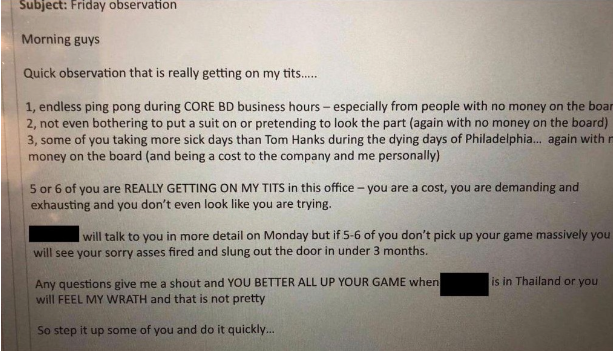 The supervisor owned up as the author of the self-described “Gordon Ramsay meets Donald Trump-style email rant”, and says he has learned from his experience after the email went viral on social media.

The original missive, titled “Friday observation”, was sent out to employees first and was then leaked online.

“Morning guys,” it began. “Quick observation that is really getting on my tits.

"1: Endless ping pong during CORE BD business hours – especially from people with no money on the board.

“2: Not even bothering to put a suit on or pretending to look the part (again with no money on the board).

"3: Some of you are taking more sick days than Tom Hanks during the dying days of Philadelphia…again with no money on the board (and being a cost to the company and me personally).

“5 or 6 of you are REALLY GETTING ON MY TITS in this office – you are a cost, you are demanding and exhausting and you don’t even look like you are trying.

“[REDACTED] will talk to you in more detail on Monday but if 5-6 of you don’t pick up your game massively you will see your sorry asses fired and slung out the door in under 3 months”.

Later that day, he apologised to staff saying it was clear he was “not at my loquacious best”.

“[It came] in a moment of seeing red and most definitely should not have happened,” he said.

A spokeswoman for Wood explained that his fondness for the phrase “getting on my tits” was because he was Scottish.

In his follow-up to staff, Wood wrote: “I am happy to hold my hands up, and to this end I wanted to apologise.

"Obviously some of you know me pretty well and know I shoot from the hip, but obviously others don’t.

“It seems I am becoming an online sensation for how NOT to communicate – and in hindsight I agree!!

"I do value you all, but I am sure you get my sentiments in wanting you to reach your full potential, even if my delivery in this case was not at my loquacious best.”

He signed off: “Thanks guys and have a good weekend.”