A team of Arctic researchers believe they have stumbled across the world’s most northerly island.

The Danish scientists had been meaning to fly to Oodaaq, which lies off the northern coast of Greenland, and previously held the title of northernmost island.

But they instead wound up on an unknown patch of land even further north – and realised only when island enthusiasts pointed it out to them on social media.

Expedition leader Morten Rasch, from the University of Copenhagen, said: ‘We were convinced that the island we were standing on was Oodaaq, which until then was registered as the world’s northernmost island. 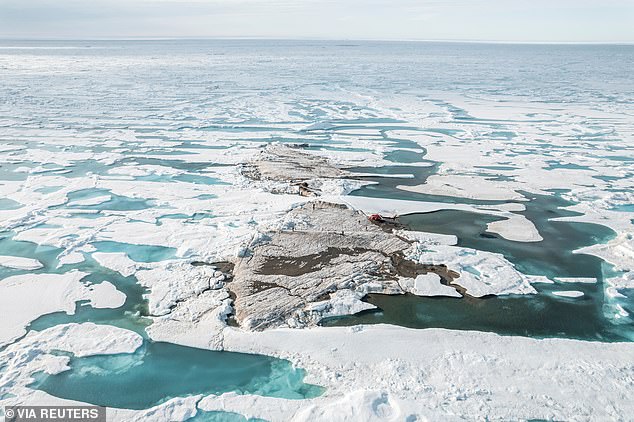 The island (pictured), which may have been formed after a major storm, is half a mile north of Oodaaq and consists primarily of small mounds of silt and gravel

‘But when I posted photos of the island and its co-ordinates on social media, a number of American island hunters went crazy and said that it couldn’t be true.’

The island, which may have been formed after a major storm, is half a mile north of Oodaaq and consists primarily of small mounds of silt and gravel.

It measures just 100ft by 200ft and rises to 13ft above sea level, the university said.

The team hope to name it Qeqertaq Avannarleq – Greenlandic for ‘the northernmost island’.

They added that the island may soon disappear when another storm hits.