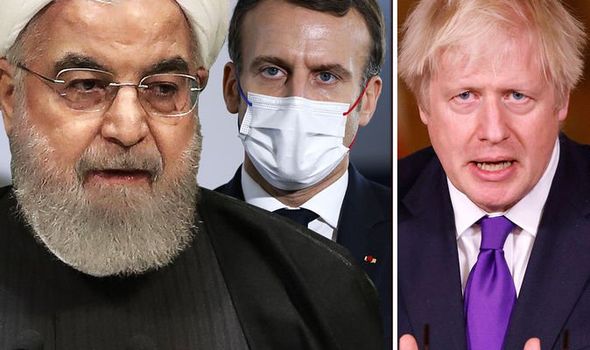 The Iranian Parliament recently passed a law which if implement would expand Tehran’s nuclear programme and limit the monitoring access of the International Atomic Energy Agency (IAEA).

“If Iran is serious about preserving a space for diplomacy, it must not implement these steps,” the three powers said in a joint statement.

This comes after Iran told the United Nations’ nuclear watchdog it plans to install three more clusters of advanced IR-2m centrifuges at its underground uranium enrichment plant at Natanz.

The agency wrote: “Iran informed thee Agency that the operator of the Fuel Enrichment Plant (FEP) at Natanz ‘intends to start installation of three cascades of IR-2m centrifuge machines’ at FEP.”

They added these were in addition to one of IR-2m machines already used for enrichment there.

But under Iran’s nuclear deal with major powers, Tehran can only use first-generation IR-1 centrifuges at the underground plant.

These are also the only machines Iran can accumulate enriched uranium with.

This latest move comes as Iranian Foreign Minister Mohammad Javad Zarif said his country will not agree to renegotiate elements of the international accord limiting its nuclear programme.

He said: “It will never be renegotiated. Period.”

The Minister also admitted Tehran will not agree to any curbs on its missile programme unless Western countries stop their “malign behaviour” in the Middle East.

He added: “As long as they’re not able to out up, they have to shut up.”

Under the Trump administration, the US imposed crippling sanctions on Iran after Donald Trump withdrew from the nuclear agreement in 2018.

Iran began publicly exceeding enrichment limits set by the agreement saying it would return to compliance if the US did the same.

Mr Zarif continued: “The US has been in grave breach of that resolution because the Trump administration has been a rogue regime.

“It doesn’t require any negotiations.”

Mr Biden – who beat Mr Trump in the US election last month – has hinted the US will return to the deal.

He told the New York Times if Iran returned to compliance, the US would rejoin and he would seek to tighten Tehran’s nuclear constraints.

But this was met with criticism by Mr Zarif who argued they will not renegotiate a deal which they have already negotiated.

He said: “Last year, the West sold to the Persian Gulf more weapons than it sold to any other part of the world.

“Over $100billion worth of weapons were sold to this region.

“Is the West ready to stop this malign behaviour?

“When they are ready to deal with those problems of their own malign behaviour in the region… then they can start talking about other things.”