This is the incredible moment a workman travels in a huge crane to pick up a McDonald’s for his lunch.

The clip, filmed in Carmarthen, west Wales, captures Malcolm Davies as he steps inside the man basket of a 40-metre crane.

The machine, which can lift up to ten tonnes, then begins to lift him into the air and above the trees. 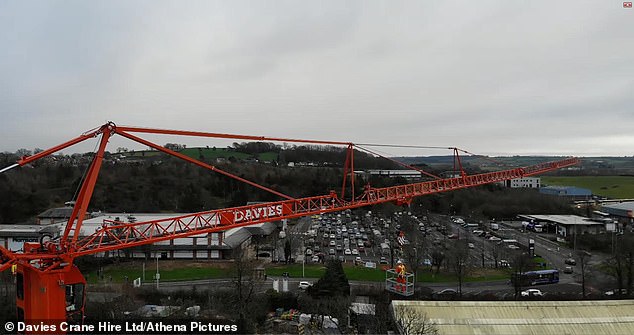 The clip, filmed in Carmarthen, west Wales, captures Malcolm Davies as he travels through the sky on his way to a nearby McDonalds

As Mr Davies reaches the top of the bright red crane, it begins to twist, moving in the direction of a McDonald’s to his left.

A few moments later, Mr Davies makes a signal and the crane stops rotating – instead slowly releasing him to the ground.

The crane hire firm owner soon lands in the outdoor seating area of a McDonald’s restaurant.

An employee is there waiting for him – and Mr Davies quickly pays for his food before taking to the sky again and enjoying some fries on the way.

Soon, the daredevil is back where he started with a Big Mac for his lunch.

Mr Davies, who owns Davies Crane Hire, told WalesOnline the team made the video for a bit of fun. 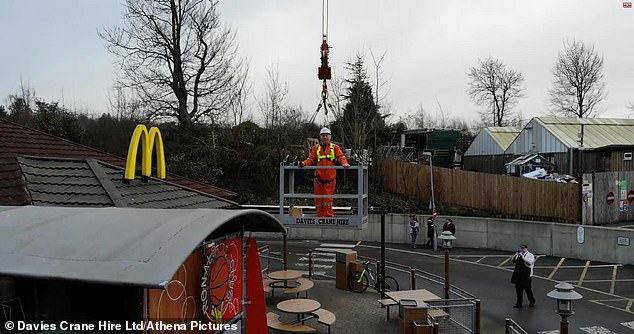 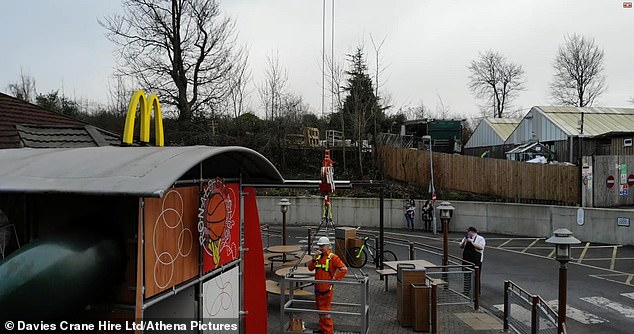 A McDonald’s employee, who was waiting for Mr Davies, then runs over to give him his food before he takes to the sky again

He said he rang the restaurant to order his food a few minutes before he climbed into the crane’s basket and began his journey.

‘It only took about ten minutes, I was eating my chips on the way back over,’ he said.

‘The driver was at the top of the crane driving it, and I was speaking to him via radio the whole time.’

‘I got a Big Mac, of course. McDonald’s was loving it, they thought it was brilliant.’