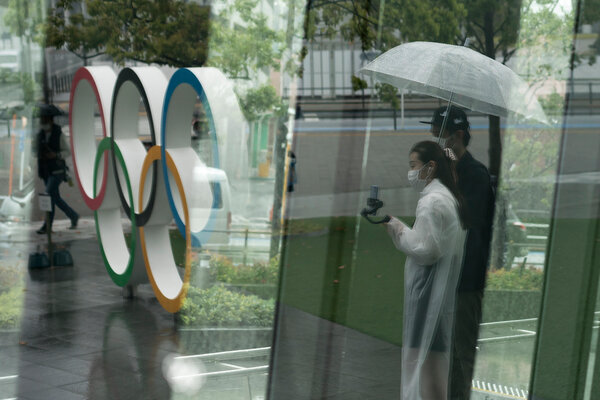 By Hikari Hida and Shashank Bengali

Organizers marked 100 days until the start of the Tokyo Olympics on Wednesday with a subdued ceremony amid tougher restrictions and growing questions over the event as Japan endures another surge of coronavirus infections.

The governor of Tokyo, Yuriko Koike, pledged that officials would do everything to deliver a “memorable tournament.” Wearing a mask and gloves, she unveiled statues of the Olympic mascots inside Tokyo government headquarters while a video link showed another group of officials unveiling a monument of the Olympic rings atop fog-shrouded Mount Takao, 30 miles west of the capital.

But parts of Tokyo and other municipalities remain under a quasi-state of emergency ordered last week to stem what officials describe as Japan’s fourth wave of infections. Japan has recorded nearly 3,200 infections a day over the last week, according to a New York Times database — few by the standards of the United States and Europe, but a worryingly high number for Asia.

The host nation is also lagging in vaccinations: Shots for those 65 and just began on Monday. So far, Japan has inoculated only frontline medical workers, who make up less than 1 percent of the population, and it will be far from fully vaccinated by July 23, when the Games are scheduled to begin.

Japan is calling these the “Recovery Olympics” — highlighting the nation’s recovery from the devastating earthquake, tsunami and nuclear disaster in 2011, as well as the world’s recovery from the pandemic. But the Games, originally scheduled for last year, are marching on despite more than 70 percent of the Japanese public saying they should be delayed again or called off entirely.

Organizers announced last month that international spectators would be barred, although thousands of athletes from over 200 nations are expected to compete. The ceremonial torch relay has been making its way across Japan with little fanfare; its two-day leg in Osaka this week was diverted off public roads and took place in an empty park.