Will Smith's post-Oscars spiritual journey has taken him back to his old high school.

The King Richard actor — famously "West Philadelphia, born and raised" — visited Overbrook High School in the city on Thursday. He popped in, with a videographer in tow, to speak to students in a digital media class at the public school. The students screamed when he walked in, video showed. It was a moment.

In addition to his remarks, the 54-year-old Oscar winner posed for a group photo with students and also cheesed for some selfies. He also looked at an old yearbook, with the photo of one "Willard Smith" in it, and interacted. Outside the school, he also greeted shocked students, taking selfies with them, shaking hands and giving hugs.

The school district shared video and photos on social media, writing, "Thanks for everything Will!" The post led to many positive comments from people saying they were past classmates with Smith — or students at that school who had met him on his previous trips back. (Some previous students talked about the time Smith took some of the top students to Africa to meet Nelson Mandela.) This is also the internet we're talking about, so there was also a lively debate in the comments about Smith's actions at the Academy Awards in March. 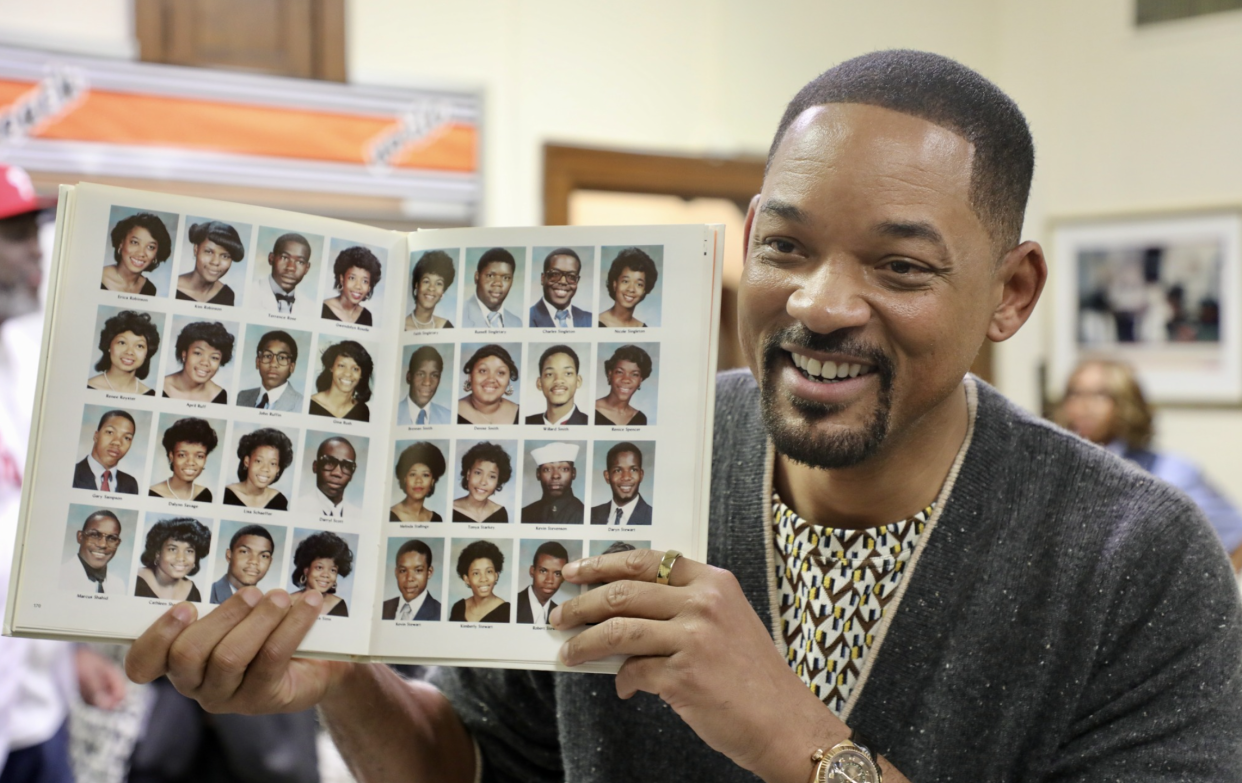 Oscars night, of course, was when Smith stormed the stage and hit presenter Chris Rock after the comedian made a G.I. Jane joke about Jada Pinkett Smith. Smith said he was defending his wife, who has alopecia; Rock was apparently unaware there was a medical reason behind the Red Table Talk co-host's bald head. Smith went on to win the Best Actor Oscar after the slap, but resigned from the Academy after. He's been banned from attending the Oscars for 10 years.

In the wake of the scandal, Smith embarked on a "spiritual journey" to India for yoga and meditation. He's stayed off the red carpet and has kept his social media light with videos of spiders, toilets and such.

Smith's first film since the scandal — the Antoine Fuqua-directed Emancipation — comes out Dec. 2. It's about an enslaved man named escaping from a Louisiana plantation — and, in light of the scandal, Smith has been constructing his own press tour to promote the project. So far instead of lots of media interviews and splashy appearances, giving people Big Willie-style laughs, he's attending a series of private screenings of the film. Last month, he attended a screening in Washington, D.C., at the Congressional Black Caucus Foundation’s 51st annual Legislative Conference, hosted by the NAACP. In recent days, he joined Tyler Perry to show the film at Morehouse College in Atlanta and just before he did the same at another historically Black college, Dillard University. He also had a private screening for the L.A. Lakers and another for an A-list group of his famous friends, including Rihanna and Dave Chappelle.