The hearing which was delayed due to coronavirus pandemic will resume on Monday and is due to run until early October. 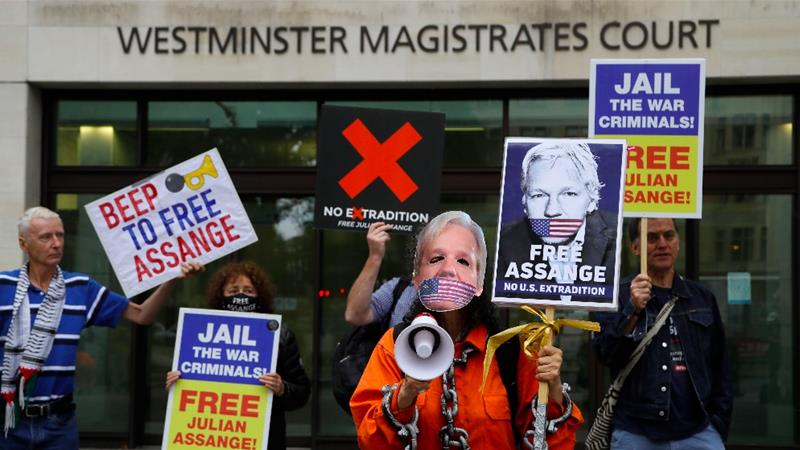 WikiLeaks founder Julian Assange is set to fight for his freedom in a British court after about 10 years of legal drama, as he challenges an attempt by the American authorities to extradite him on spying charges over the site’s publication of secret US military documents.

Lawyers for Assange and the US government are scheduled to face-off in London on Monday at an extradition hearing that was delayed due to the coronavirus pandemic.

US prosecutors have indicted the 49-year-old Australian on 18 espionage and computer misuse charges adding up to a maximum sentence of 175 years.

His lawyers say the prosecution is a politically motivated abuse of power that will stifle press freedom and put journalists at risk.

“Journalists and whistle-blowers who reveal illegal activity by companies or governments and war crimes – such as the publications Julian has been charged for – should be protected from prosecution,” she said.

US prosecutors say Assange is a criminal, not a free-speech hero.

They allege that Assange conspired with US army intelligence analyst Chelsea Manning to hack into a Pentagon computer and release hundreds of thousands of secret diplomatic cables and military files on the wars in Iraq and Afghanistan.

They also say he conspired with members of hacking organisations and sought to recruit hackers to provide WikiLeaks with classified information.

“By disseminating the materials in an unredacted form, he likely put people – human rights activists, journalists, advocates, religious leaders, dissidents and their families – at risk of serious harm, torture or even death,” James Lewis, a British lawyer acting for the US government, told a hearing in February.

Assange argues he is a journalist entitled to First Amendment protection, and says the leaked documents exposed US military wrongdoing.

Among the files released by WikiLeaks was a video of a 2007 Apache helicopter attack by US forces in Baghdad that killed 11 people, including two Reuters journalists.

His lawyers argue the prosecution is an abuse of process by a Trump administration that wants to make an example of Assange. They say he would be held in inhuman conditions and would not get a fair trial in the US.

‘Target of a negative public campaign’

Journalism organisations and human rights groups have called on the UK to refuse the extradition request.

Amnesty International said Assange was “the target of a negative public campaign by US officials at the highest levels”.

“If Julian Assange is prosecuted it could have a chilling effect on media freedom, leading publishers and journalists to self-censor in fear of retaliation,” said Amnesty’s Europe director, Nils Muiznieks.

The four-week extradition hearing is part of a twisting saga rife with competing claims of hacking, spying and subterfuge.

Assange’s lawyers claim the US intelligence services directed a private security firm to spy on him while he was living in Ecuador’s London embassy – a case currently being heard in a Spanish court.

Assange also alleges he was offered a pardon by the Trump administration if he agreed to say Russia was not involved in leaking Democratic National Committee emails that were published by WikiLeaks during the 2016 US election campaign. The White House denies that claim.

Assange’s legal troubles began in 2010, when he was arrested in London at the request of Sweden, which wanted to question him about allegations of rape and sexual assault made by two women.

He refused to go to Stockholm, saying he feared extradition or illegal rendition to the US or the US prison camp at Guantanamo Bay, Cuba.

In 2012, Assange sought refuge inside the Ecuadorian embassy, where he was beyond the reach of British and Swedish authorities – but also effectively a prisoner, unable to leave the tiny diplomatic mission in London’s Knightsbridge area.

The relationship between Assange and his hosts eventually soured, and he was evicted from the embassy in April 2019. The British police immediately arrested him for jumping bail in 2012.

Sweden dropped the sex crimes investigations in November 2019 because so much time had elapsed, but Assange remains in London’s high-security Belmarsh Prison as he awaits the extradition decision.

Supporters say the ordeal has harmed Assange’s physical and mental health, leaving him with depression, dental problems and a serious shoulder ailment.

Assange’s partner Stella Moris, who had two sons with him while he lived in the embassy, said he looked thinner and was in “a lot of pain” when she visited him in prison in late August for the first time since March.

The extradition hearing opened in February but was put on hold when the UK went into lockdown in March to slow the spread of the coronavirus. It is resuming with social distancing measures in court and video feeds so that journalists and observers can watch remotely.

Assange is expected to be brought by prison van from Belmarsh to the Old Bailey criminal court for the hearing, which is due to run until early October.

District Judge Vanessa Baraitser is likely to take weeks or even months to consider her verdict, with the losing side likely to appeal. 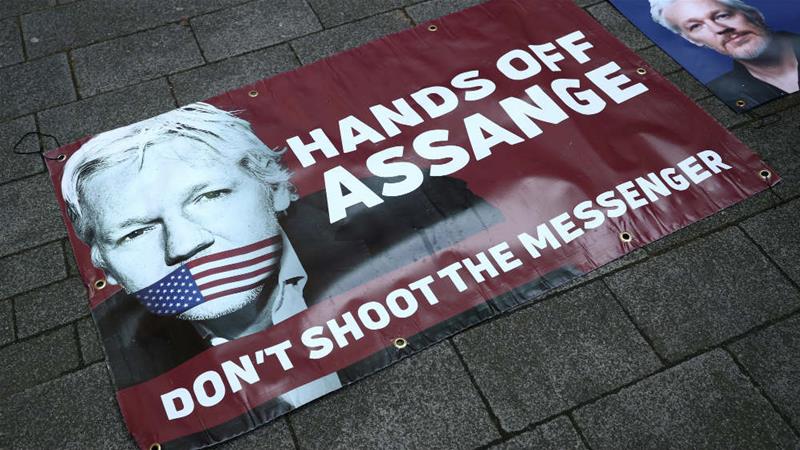 On trial: Julian Assange and journalism