EXCLUSIVE: Who will be named Charles Manson’s heir? Judge is set to rule this week on claims from prison pen-pal, MMA fighter ‘grandson’, and real estate agent ‘son’ who all vie to inherit the murderer’s $1M estate and rights to his music, art and writings

More than five years after Charles Manson’s death in prison, a Los Angeles judge is set to rule this week on who will inherit the notorious killer’s belongings and the rights to his music, art and writings that have been estimated to be worth up to $1 million.

Three contenders are vying to be declared sole heir to Manson’s estate: one-time mixed martial arts fighter Jason Freeman who claims to be the murderer’s grandson; memorabilia collector and Manson pen-pal Michael Channels, who says he has a will that leaves everything to him; and real estate agent Daniel Arguelles, who insists he’s Manson’s son.

They have all filed legal documents, arguing their claims and bashing each others’ cases.

And at probate court in downtown LA on Thursday, Judge Ruben Garcia is scheduled to hear petitions from all three and decide who is the winner.

Last summer, it was only a two-horse race with self-proclaimed grandson Freeman, 46,  from Bradenton, Florida, looking like the front-runner over Channels, whose 2002 Manson will Freeman claims is fake.

But in August, on the eve of a court hearing Freeman was confident he’d emerge from victorious, a third claimant, 62 year-old LA realtor Arguelles, stepped into the fray, filing 11th-hour legal papers saying he’s the mass murderer’s ‘biological son’, thanks to a one-night stand his mother had with Manson back in 1959. 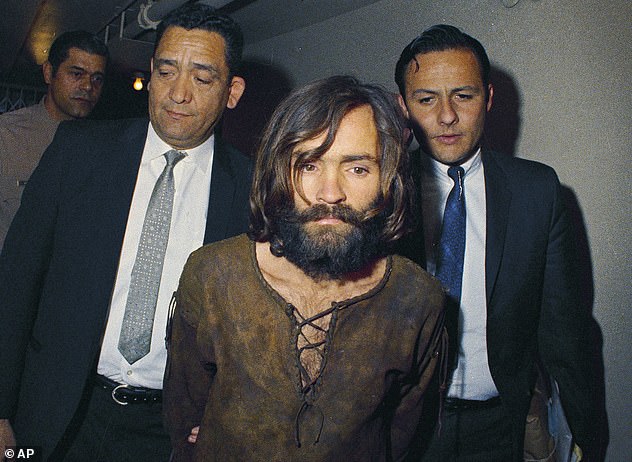 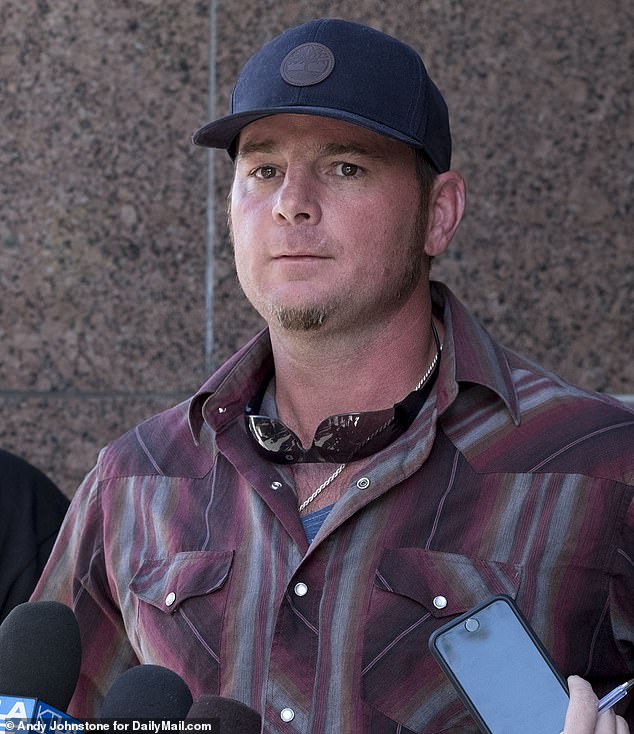 Jason Freeman, 46, is a former mixed martial arts fighter from Bradenton, Florida, who claims to be Charles Manson’s grandson 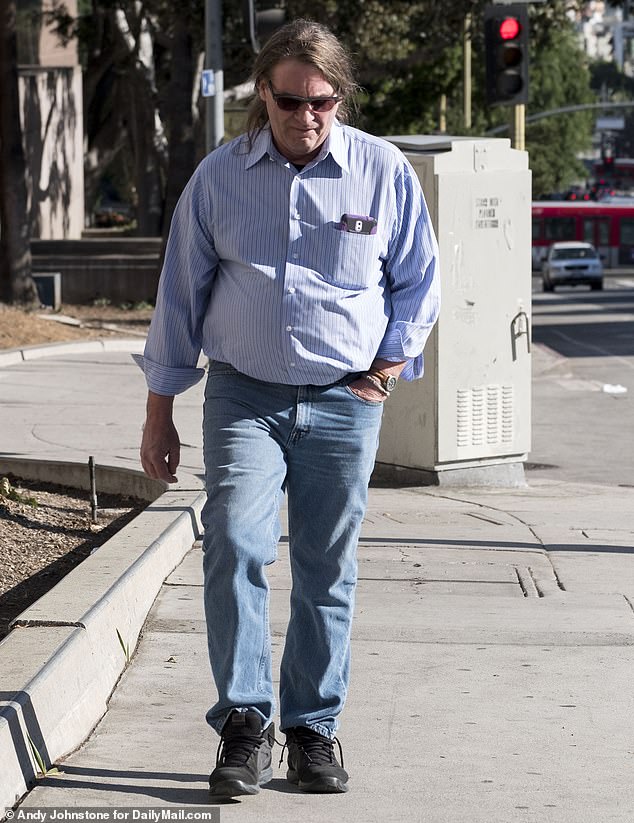 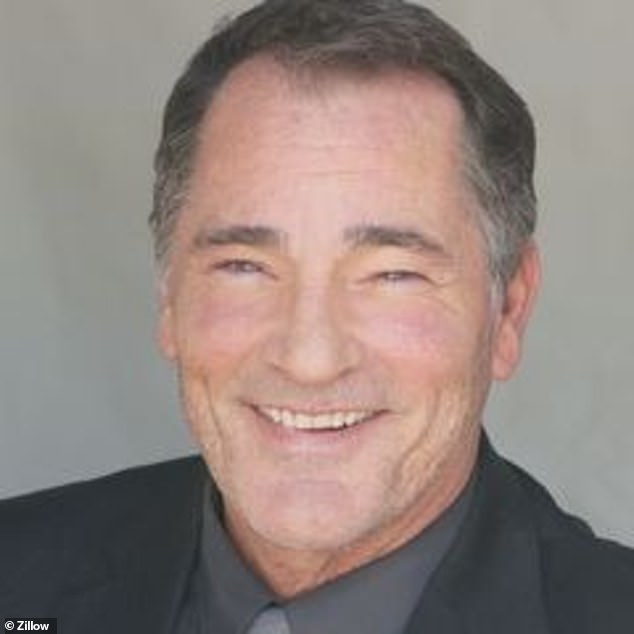 Daniel Arguelles, 62, says he’s the mass murderer’s ‘biological son’, thanks to a one-night stand his mother had with Manson back in 1959

And to allow Arguelles time to put his case together Judge Garcia postponed that August hearing to this week.

In his petition to probate court, Arguelles says, ‘There is clear and convincing evidence’ that he is the biological son of Manson and he is ‘entitled to an equal share’ of Manson’s estate. 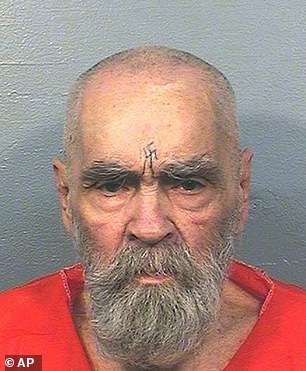 After Manson was released from a five-year jail stint at Terminal Island in San Pedro, California, in late 1958, say the court documents, he met up in Los Angeles with Arguelles’s mother, Darlene Large Pons, also known as Darlene Large Whitt.

‘Petitioner (Arguelles) alleges that on or around January 25 1959, petitioner’s mother and dependent (Manson) conceived petitioner in a one-night encounter,’ says Arguelles, who was born November 1 1959.

Fast forward to July 2015 and Arguelles tried to locate his biological father by sending a DNA sample to Ancestry.com.

The results, says Arguelles, showed a ‘close relative match’ with Michael Brunner – who was one of the original claimants in the long-running fight over Manson’s estate, declaring that he also was a biological son.

The DNA evidence showed that Brunner and Arguelles ‘have a 99.99998% probability that they share the same father,’ he adds.

The assertion that he’s Brunner’s half brother could pose a major problem for Arguelles’s case – since Brunner himself dropped out of the race to be declared Manson’s offspring, asking the court more than three years ago to dismiss his claim.

Judge Garcia decided last June that he was satisfied Freeman is the son of Charles Manson Junior, based on an Ohio court’s 1986 finding that Manson Jr. was ordered to pay child support to Freeman’s mother.

But the judge said he still needed proof that Manson Jr. – who committed suicide in 1993 – was actually the offspring of Manson, the leader of the cult that killed eight-months-pregnant actress Sharon Tate and six others in a brutal and bloody rampage through LA in 1969.

A month later, lawyers supporting Freeman’s claim seemingly sealed the deal by providing exactly what the judge was asking for – Manson Jr.’s birth certificate that they say proves his father was the infamous criminal.

The birth certificate states that Manson Jr. was born April 10 1956 in Los Angeles to the then-21-year-old Manson and 18 year-old Rosalie Jean Willis.

Charles Manson died of natural causes on November 19, 2017 at Corcoran State Prison, California, where he spent 47 years on death row.

Some of Manson’s belonging – like his guitars, clothes and other personal jailhouse property that currently sits in boxes at a storage facility – could fetch thousands, perhaps more, from collectors who get a kick out of owning something once handled by a mass-murderer.

But likely worth more are the rights to his art, journals and stories and the royalties on the songs he wrote, including Look at Your Game, Girl which was recorded by Guns N’ Roses on their platinum 1993 album The Spaghetti Incident. 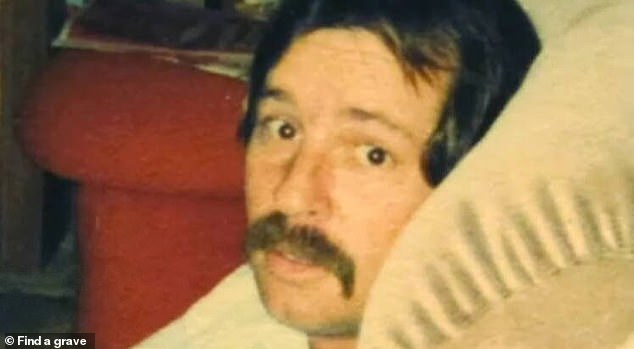 A judge said last year that he accepted that Freeman is the son of Charles Manson Jr., (pictured) based on an Ohio court’s 1986 finding that Manson Jr. was ordered to pay child support to Freeman’s mother 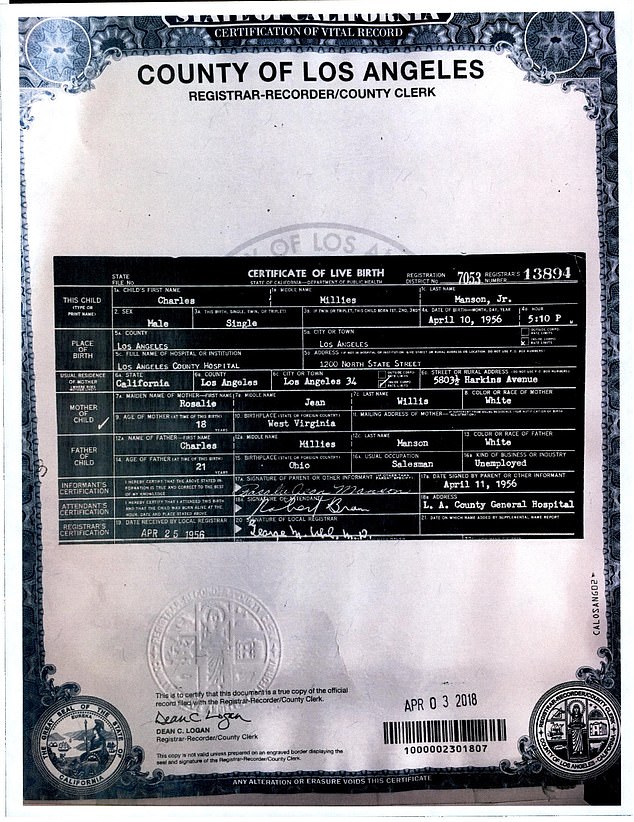 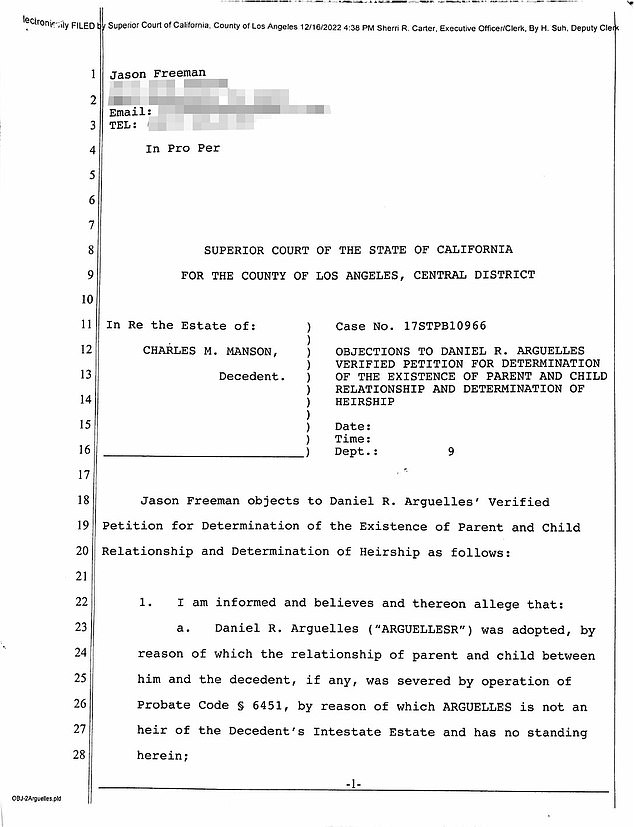 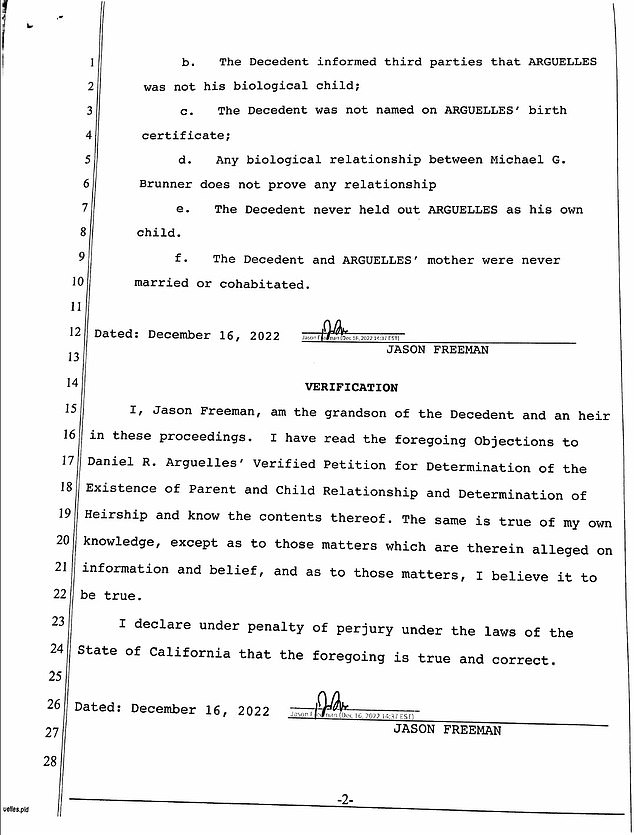 Four people originally filed petitions proclaiming their right to the estate. Two of them, Brunner and Matthew Lentz – who also asserted he was Manson’s kin – had their claims dismissed in 2019, leaving just Freeman and Channels.

Then, in April 2021, Nancy Claasen, who proclaimed she was Manson’s half-sister, threw her hat into the ring, insisting she was ‘sole heir-at-law’ and disputing the claims of both Freeman and Channels. Judge Garcia dismissed her case last year.

Freeman was the very first to stake a claim by filing birth and death certificates he maintained prove he’s Manson’s grandson.

He said he learned about his relationship to Manson when he was eleven but his grandmother, Rosalie Willis, who was apparently married to Manson in the 1950s, never spoke about his grandfather.

Freeman has always maintained that his father was Charles Manson Jr. who couldn’t live with his shameful name so changed it to Charles White, and eventually blew his brains out in 1993.

Channels says he was friends and pen pals with Manson for 30 years and claims to have a document written by him in 2002 which leaves his remains and estate to Channels and reads: ‘I have disinherited both known sons and any unknown children in the present and in the future.’

Channels filed a court motion in 2018 demanding that Freeman submit to a DNA test to prove if he’s related to Charlie Manson.

The judge in the case at that time granted the motion but Freeman appealed and the California Court of Appeals overturned the judge’s ruling so Freeman never underwent the DNA test.

Freeman has attacked Channels’s assertion that he’s the sole beneficiary of a purported Manson will, saying in court papers that the claim should be denied because it was ‘a direct result of undue influence exercised by (Channels) over (Manson) and is not, and never was, the will of (Manson).’

Arguelles has also blasted Channels’s document, saying the signature of Manson is forged and accusing Channels of witnessing the will with his own signature two days before Manson allegedly signed it. 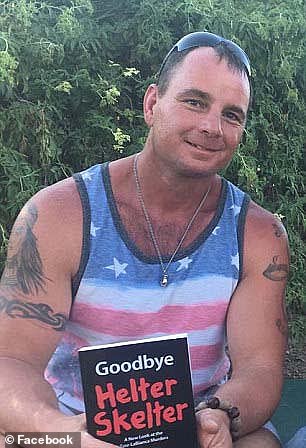 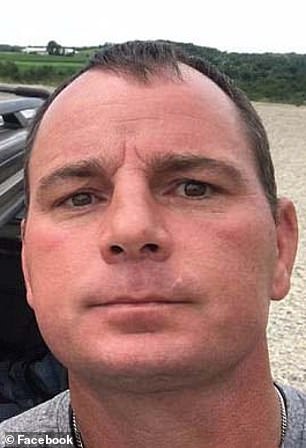 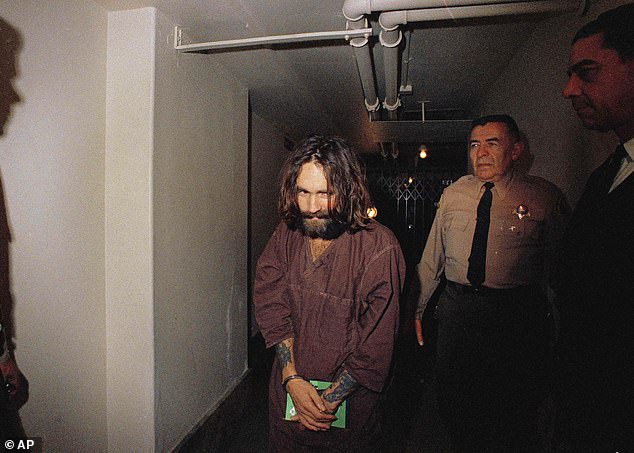 Some of Manson’s belongings – like his guitars, clothes and other personal jailhouse property that currently sits in boxes at a storage facility – could fetch thousands, perhaps more

In addition, Arguelles accused Channels of using ‘duress, menace, fraud or undue influence’ to get the will from Manson who had mental issues ,including schizophrenia and paranoid delusional disorder, according to a 1997 parole hearing.

Freeman’s case stating he’s sole heir to Manson’s estate was supported by a March 2018 court decision in Kern County – where Corcoran State Prison is located – that awarded him possession of his ‘grandfather’s’ corpse.

Kern County Commissioner Alisa Knight, in Bakersfield ruled: ‘Freeman is hereby determined to be the surviving competent next of kin of (Charles Manson). No sufficient probative evidence was provided to the court to refute Freeman’s claim.’

Five days later, Freeman was one of the speakers at a memorial service at a funeral home in Porterville, 50 miles north of Bakersfield, where some 30 people – including Manson’s ex-fiancé Afton Burton and former Manson Family cult member Sandra Good – filed past the open coffin.

Manson, whose body had been in cold storage since his death at age 83, was cremated the same day and America’s most feared and hated killer’s ashes were strewn along a creek bed in a nearby forest.