‘Cynical and disdainful’ white van man, 27, is jailed for running over and killing prostitute after she demanded he pay her £50 for sex

A white van driver was described as ‘cheap, cynical and disdainful’ as he was jailed for four and a half years for running over and killing a prostitute.

James Martin, 27, drove away with Stella Frew hanging on to the side of his van in Sutton, south London, in July last year.

As he zigzagged through parked cars, the 38-year-old victim hit an Audi and fell under the van wheels, the Old Bailey was told.

Martin fled the scene as members of the public rushed over to help Ms Frew, who had suffered ‘extensive’ injuries and died at the scene.

The court had been told the incident appeared to have been sparked by the defendant’s refusal to pay her for sex and demanded she pay him £50. 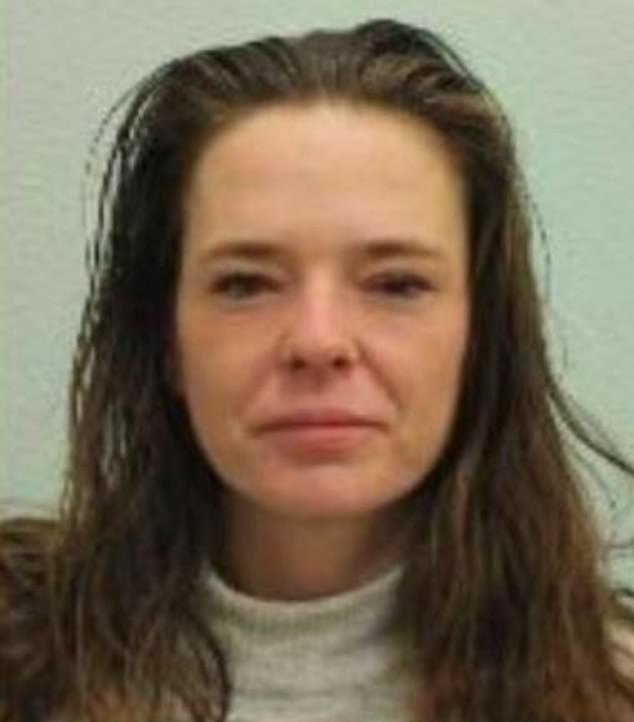 James Martin, 27, drove away with Stella Frew (pictured) hanging on to the side of his van in Sutton, south London, in July last year

Martin had also driven off with the victim’s handbag in his van, which he later threw into the road.

Ms Frew, who had four children and four grandchildren, had problems with drugs and drink and was said to have been ‘out of her head’ when she approached Martin after he ‘wolf-whistled’ her.

He pulled over and Ms Frew leaned into the truck to give Martin oral sex, but they got into an argument when she asked for £50 but he said it was too much.

Witnesses Alexander Colebrook and Lisa Tyler were driving past and saw Martin accelerating away.

From the passenger position in the car, Ms Tyler, a passenger in Ms Colebrook’s car, said: ‘As the van was coming towards us, there was a lady hanging on to the window. As the van was moving she was getting pulled along.

‘It was going quite fast, the engine revved a bit The van passed two standstill cars, one on the left and one on the right and as it passed these two cars, she’s gone down on the floor.’ 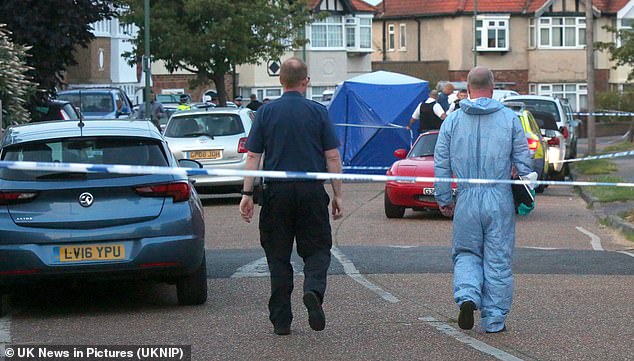 As he zigzagged through parked cars, the 38-year-old victim hit an Audi and fell under the van wheels, the Old Bailey was told. Pictured: The scene

Giving evidence Martin claimed he was at the junction ready to pull out when Ms Frew opened the passenger door and offered to perform a ‘blow-job’.

Martin said he agreed and drove to a car park ‘where the act took place outside of the vehicle.

‘As it was happening I realised that I shouldn’t be doing it, I wanted to stop doing it and as I told her that, I believe she wanted to carry on, I didn’t want to do it any more.

‘We had a little bit of an argument about doing it and not doing it. I then get back into my vehicle, she walks round to the passenger side.

‘She did get into the vehicle, I told her to get out.’ He said they arguing after she said ‘that’s got to be worth £50’. ‘I was shocked.

‘I said something like you must be joking. I then took the condom back off of her and I threw it away.’ Martin said he drove away and did not realise she was on the van

Prosecutor Jonathan Polnay said: ‘She was obviously very desperate to obtain money and she would not have been willing to leave with out it – and still less without her handbag.’

Martin had initially denied wrongdoing but had pleaded guilty to causing Ms Frew’s death by dangerous driving on what would have been the first day of his trial.

Judge Richard Marks QC rejected Martin’s case that Ms Frew was not hanging on to the van as he drove off.

The judge also noted Martin’s expressions of remorse were ‘largely centred on the effect on himself and his family’ and he had shown ‘little empathy’ for his victim.

Judge Marks told Martin: ‘She did not deserve to die in the circumstances that she did.

‘It is clear from the evidence that she got dragged along the road, coming into contact with a parked vehicle.

‘Your van drove over her body causing her fatal injuries. She had a tyre mark vertically up her back from her pelvis to her neck.

‘Your behaviour in the course of this incident and in particular at and towards the end of the incident was cheap, cynical and disdainful.’

He said Martin was only thinking of himself when he drove off, despite the risk to Ms Frew.

The judge went on: ‘Having driven away not having paid her a penny piece… you demonstrated the contempt for which you held her by throwing her handbag from the window.’

Given the lateness of Martin’s guilty plea, Judge Marks gave him only a 10 per cent discount on his sentence, handing him four and a half years in prison.

Martin was disqualified from driving for four years upon his release from jail.

The judge commended the dignity shown by Ms Frew’s family who wiped away tears in court as Martin was sentenced by video link from Belmarsh prison.

Earlier, Ms Frew’s two grown-up daughters had described their mother’s troubled life in which they said she had suffered abuse at the hands of men.

Frankie Cottrell said: ‘Stella was a vulnerable young woman exploited by many due to her kindness, especially by men.

‘It pains us that Stella’s life has been ended by the actions of a male too.’

She went on: ‘She was somebody, she had a family who love her dearly. Mr Martin may have thought my mum was worthless but to us she was everything.’

Georgie Cottrell described her mother as ‘the kindest, most warm-hearted woman’.

She said: ‘In her life she had always been abused and hurt by men and that is why this pains us all so much – that she had died due to one too.’