A few hundred counterprotesters met in a plaza near the Huntington Beach pier Sunday to voice their opposition ahead of the White Lives Matter rally set to start at 1 p.m., the Los Angeles Times reported.

The crowd grew to nearly 500 just hours later, prompting Huntington Beach to declare an unlawful assembly as tensions between the huddled masses heated up. 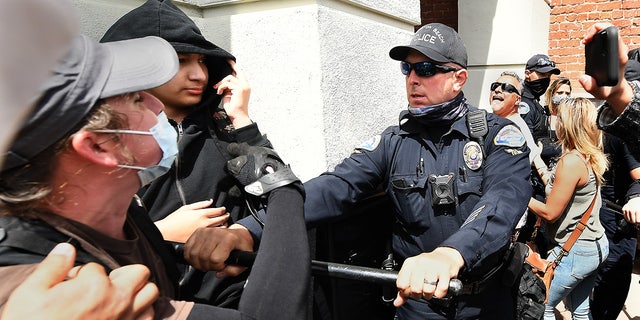 Footage of the rally showed one man holding up both middle fingers to a crowd while repeatedly saying, “White lives matter,” as others shouted him down and chanted for him to go home.

Video also showed some people scuffling on the ground as cops tried to keep the peace and reporters scurried to take photos of the incensed crowds.

Others in the crowd told the man, who was wearing sunglasses and a beige ski mask, to “keep walking,” according to the clip.

Dozens of activists, including some with Black Lives Matter, had shown up well before the event’s start time to stand in solidarity, KABC reported.

Police arrested 12 people at the rally, including two were using amplified sound devices. One person also obstructed officers and had a metal baton, two cans of pepper spray and a knife in his backpack, the Los Angeles Times reported.

No serious injuries were reported, but a scuffle did break out involving a man carrying a Trump 2020 sign, according to KABC.

The rally, one of several planned across the nation Sunday, was organized through the messaging app Telegraph, according to the Anti-Defamation League.

Promoted as a way to “revive the white racial consciousness,” the demonstrations were designed to spread hateful ideologies, but were marred by poor attendance, NBC News reported.

Similar rallies in Raleigh, North Carolina, Philadelphia and New York were easily outnumbered by counterprotesters there, according to the report.

The rallies were reportedly doomed from the start because organizers were “haphazard and ill-informed,” said Megan Squire, a computer science professor at Elon University in North Carolina who monitors online extremism.

One counterprotester in Huntington Beach, meanwhile, said he attended Sunday’s demonstration to “defend” his beloved city while holding a sign that read “Old White Guys Against Racism” and an American flag.

“It’s a great city full of great people,” Roger Bloom, 65, told the Los Angeles Times. “Just because a handful of pathetic losers come out here every so often to a public square and make a stink … they give this town a bad name. I wish they’d go back to their basements and stay there.”