Washington: White House press secretary Sarah Sanders on Wednesday night shared a video of CNN reporter Jim Acosta that appeared to have been edited to make his actions at a news conference look more aggressive than they were.

The edited video looks authentic: Acosta appeared to swiftly chop down on the arm of a White House aide as he held onto a microphone while questioning US President Donald Trump. However in the original video, Acosta's arm appears moves only as a response to a tussle for the microphone. His statement, "Pardon me, ma'am," is not included in the video Sanders shared.

Critics said that video – which sped up the movement of Acosta's arms in a way that dramatically changes the perception of the journalist's response – was deceptively edited to score political points.

The edited video was first shared by Paul Joseph Watson, known for conspiracy theory videos on the far-right website Infowars.

Watson said he did not change the speed of the video and says claims that he had altered it were a "brazen lie."

However a side-by-side comparisons support claims from fact-checkers and experts such as Jonathan Albright, research director of the Tow Centere for Digital Journalism at Columbia University, who say crucial parts of the video appear to have been altered so as to distort the action.

The video has become a flashpoint in the battle over viral misinformation, turning a live interaction watched by thousands in real-time into just another ideological tug-of-war. But it has also highlighted how video content – long seen as an unassailable verification tool for truth and confirmation – has become as vulnerable to political distortion as anything else.

Albright said distorted videos like this pose an even greater risk of perpetuating misinformation than completely faked videos, because they contain a grain of truth and will likely be given the assumption of accuracy.

"The most dangerous type of fake news and reporting and evidence is when you get into the fine details, the nuanced things that are shaped to present a certain viewpoint or decision or news a certain way," he said.

"It's not AI-generated or completely false. It's something that's real but has been literally stretched … and moulded into weaponised evidence." 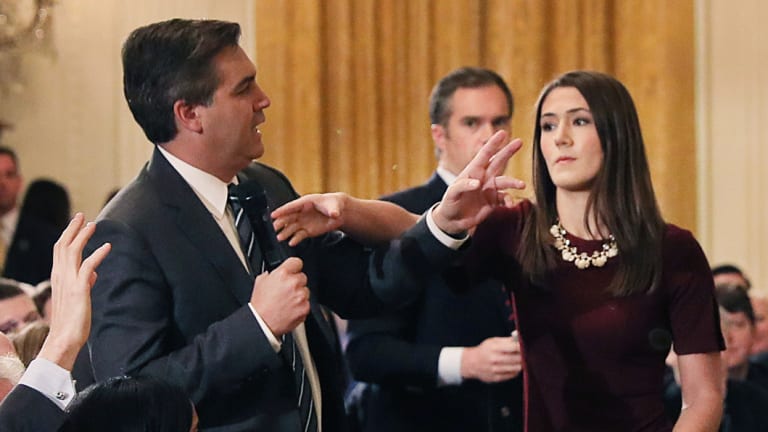 A White House staff member reaches for the microphone held by CNN’s Jim Acosta as he questions US President Donald Trump during a news conference.Credit:Reuters

Sanders' tweet of the edited video, in which she said the White House would "not tolerate the inappropriate behaviour clearly documented in this video," has at least 20,000 retweets and more than two million views.

Watson's video, posted two hours before, has been seen at least 740,000 times.

Matt Dornic, a CNN communications executive, tweeted that Sanders' sharing of the video was "absolutely shameful."

Sanders did not immediately respond to requests for comment.

During the White House news conference, Acosta and Trump sparred over a question of whether Trump had "demonised immigrants" by calling a caravan of Central American migrants "an invasion."

Following a lengthy back-and-forth, a White House intern tried to take the microphone from Acosta, who held onto it.

"Pardon me, ma'am," Acosta said in the original video, though the audio was stripped from the edited version.

On Wednesday night, Sanders accused Acosta of "placing his hands on a young woman" and said his press credentials would be suspended "until further notice." Press advocates called the move an unprecedented retaliation against a journalist.

The seconds-long interaction has been analysed in excruciating detail and likened to a 21st-century "Zapruder film," the closely scrutinised amateur video of John F. Kennedy's assassination in 1963. On social media, it has quickly become an object of massive ideological division, in which the same scene is open to very different interpretations.

Watson wrote on Infowars that Acosta "clearly uses his left arm to physically resist/restrain the woman," and that he "overpowered her." Infowars, whose bizarre conspiracy theories include the baseless claim that the Sandy Hook school shooting was a hoax, was banned this year by Facebook, Google and Twitter for sharing offensive or threatening content.

In another video of the encounter tweeted by Sarah Burris, an editor at the left-leaning political blog Raw Story, the footage has been slowed down and annotated to show the four times the White House intern touches Acosta while trying to take the microphone. It has been viewed more than one million times.