Where Gambino gangsters go to die: The Staten Island mafia cemetery where the body of mob boss Frank Cali now lies in a two-tiered mausoleum near other high-ranking associates

Frank Cali, the Gambino family boss who was buried on Tuesday in a secretive funeral on Staten Island, has taken his place among other mafia legends in the cemetery where he was laid to rest.

Cali, 53, has been entombed in a coveted spot on the lower level of the extravagant Hillview Mausoleum in the Moravian Cemetery in New Drop.

The cost of his crypt and the quiet funeral service was $45,000 which was reportedly paid with a suitcase full of cash.

Nearby lie other former bosses including Paul Castellano, who was gunned down in 1985 in an infamous ambush outside Sparks Steakhouse. He lies in a second-floor crypt in another mausoleum. 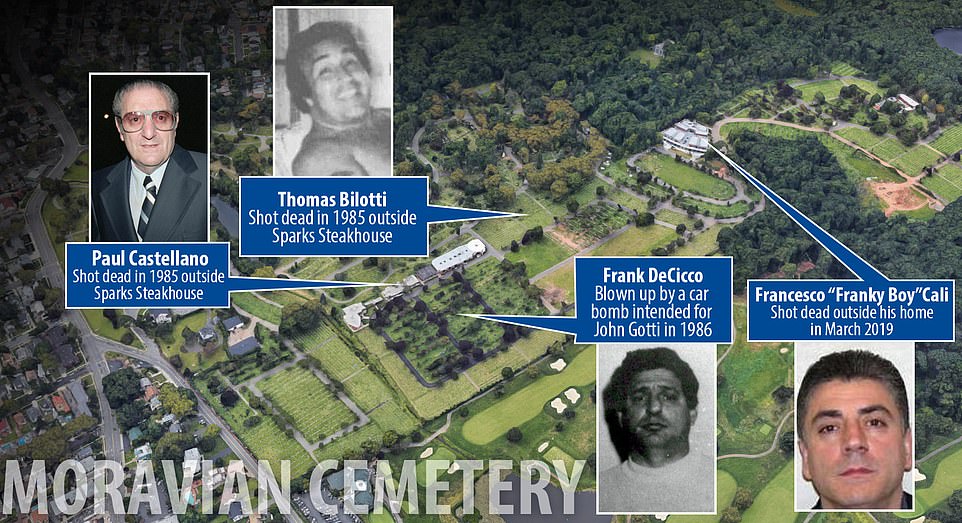 The bodies of four Gambino family mobsters are at the Moravian Cemetery in New Drop, Staten Island, including Francesco ‘Franky Boy’ Cali who was laid to rest on Tuesday. He is in a mausoleum as is former boss Paul Castellano but Frank DeCicco and Thomas Bilotti, who held lower ranking positions, are buried in the ground 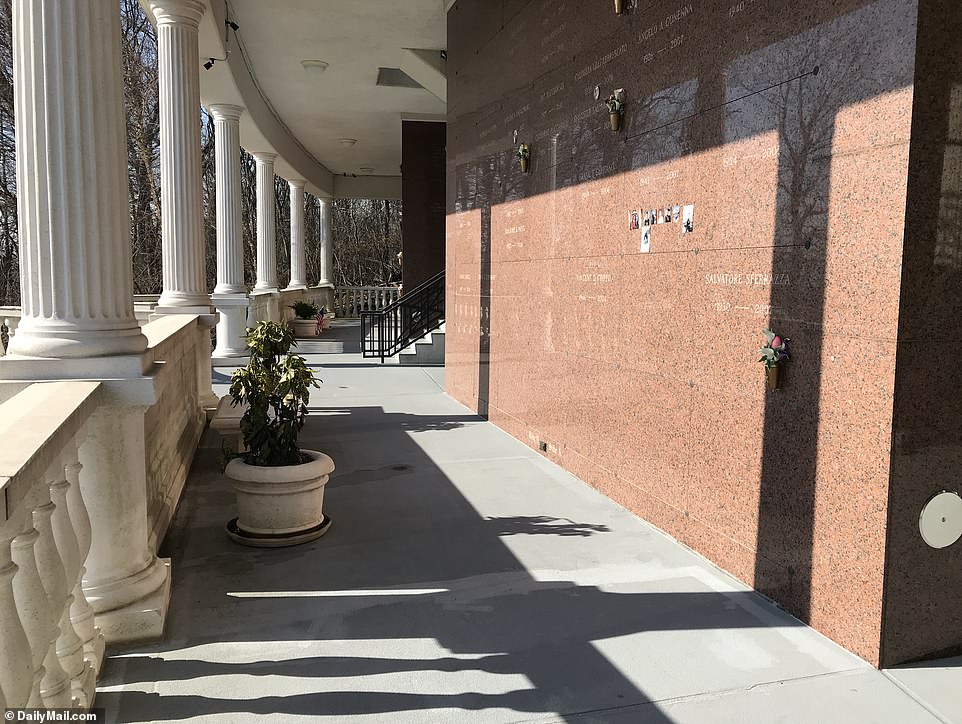 Frank Cali’s casket is in one of the crypts in the Hillview Mausoleum, shown. It is not yet marked with his name. His funeral was on Tuesday 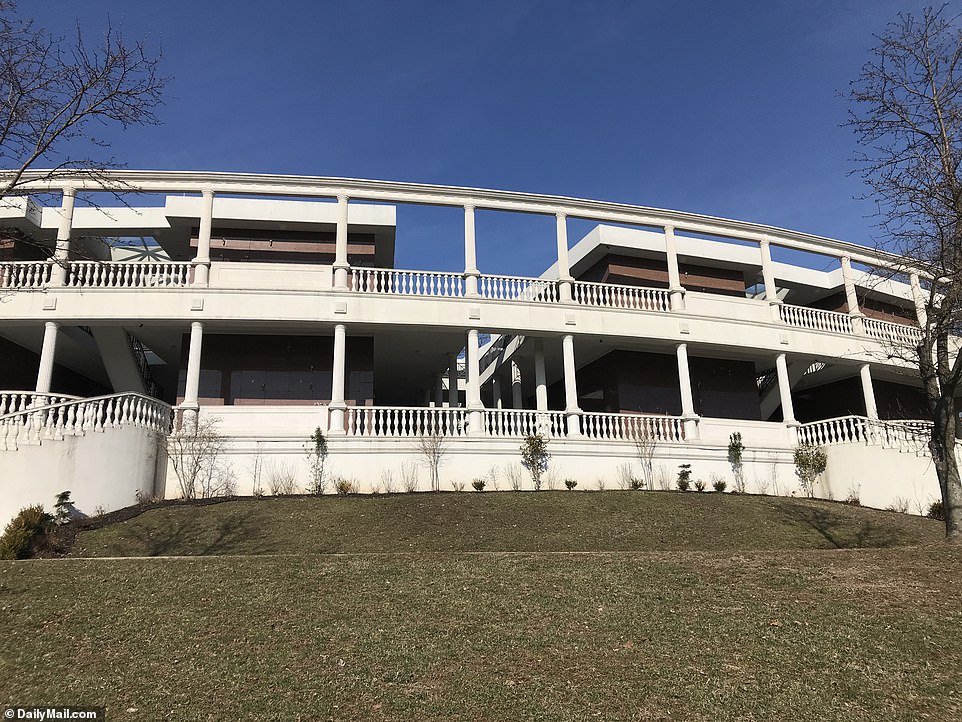 In a nearby plot is the grave of Thomas Bilotti who had driven Castellano to the steakhouse the night he was murdered. 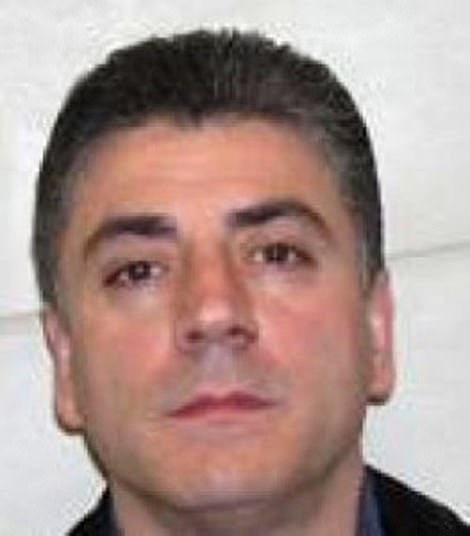 He was gunned down getting out of the car too and the grisly scene was photographed shortly afterwards.

Bilotti’s grave is among others in an open part of the cemetery.

Their deaths were ordered by the ambitious late boss, John Gotti who died in prison in 2002 and is in a different cemetery.

Gotti plotted their deaths as part of his takeover of the family after the death of boss Carlo Gambino.

To his dissatisfaction, Gambino had appointed Castellano as his successor when he died in 1976.

Castellano was known more for his business acumen and interest in white collar crime than he was for his brawn and Gotti, a Maverick who was selling drugs behind his back and against his wishes, had no appetite for it.

He arranged their deaths then assumed control of the family.

The killings are two of the most notorious in New York mafia history. 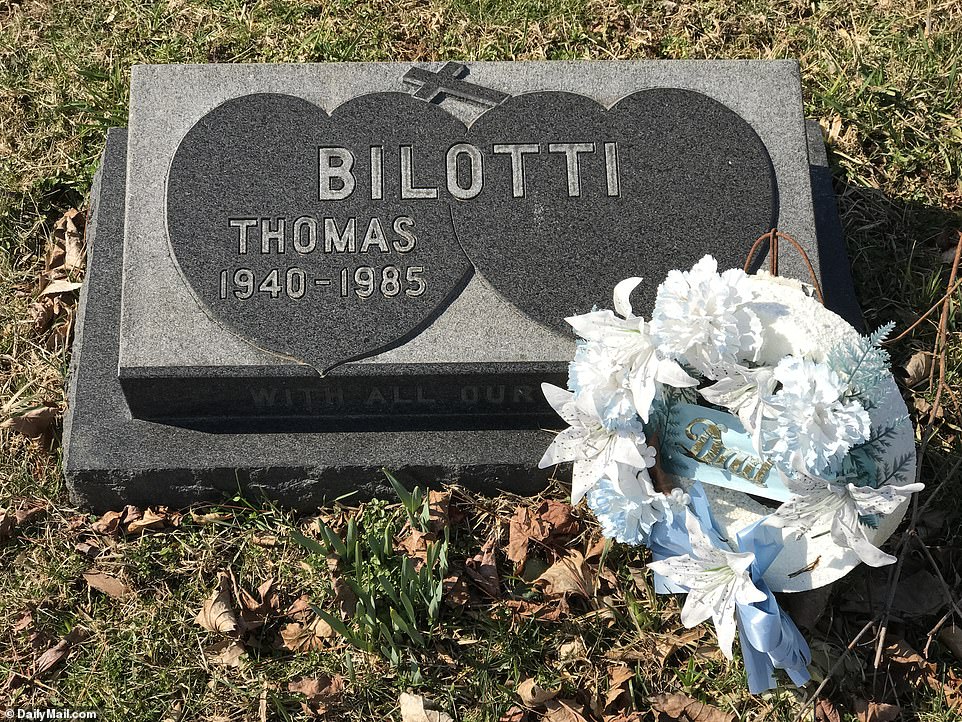 Thomas Bilotti was shot dead outside Sparks Steakhouse in Manhattan in 1985. He had driven boss Paul Castellano there in an ambush set up by John Gotti. His grave is in the main section of the cemetery. There is space for his wife, Donna 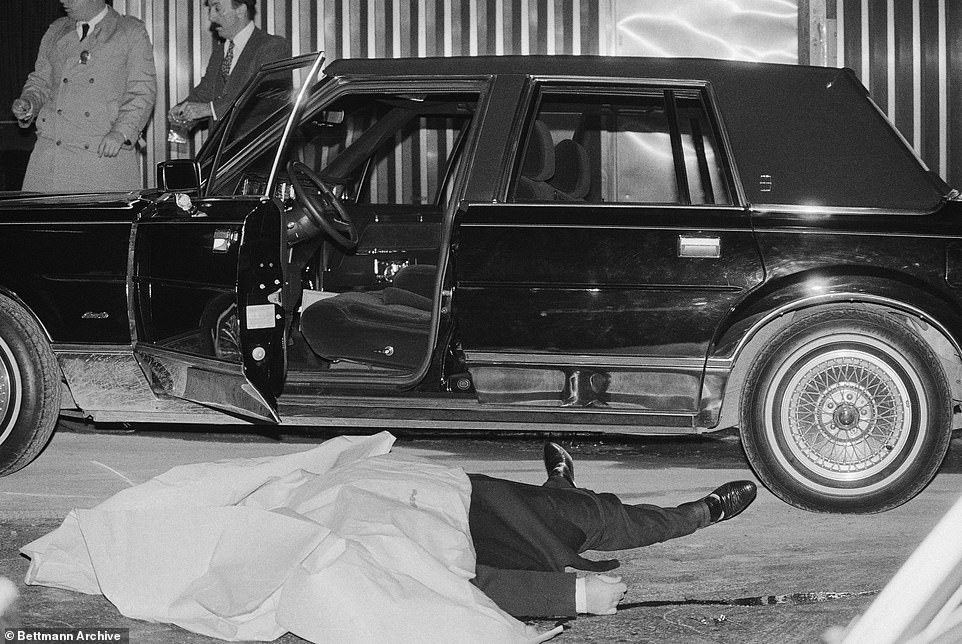 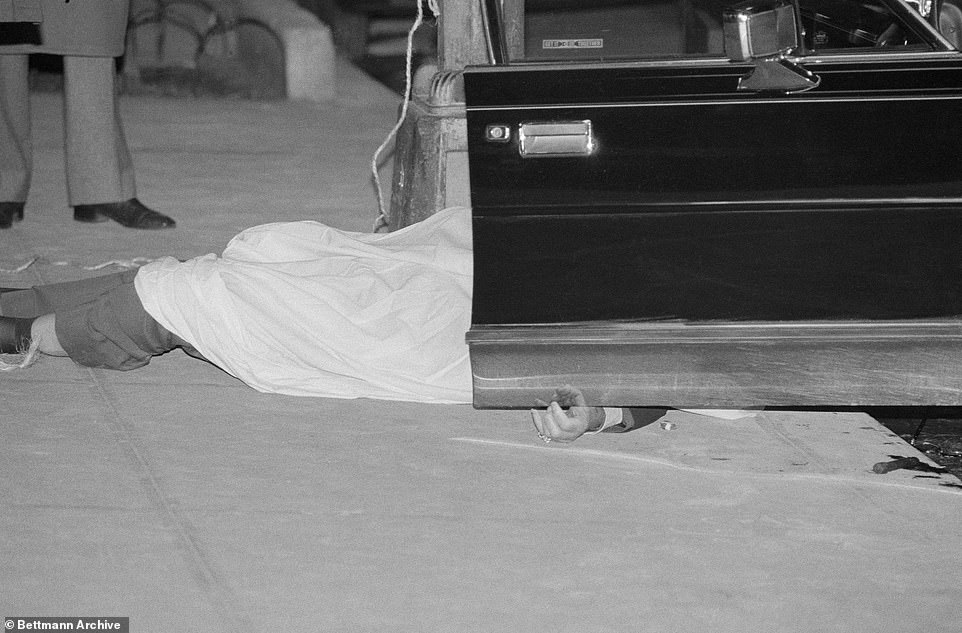 Paul Castellano’s body was found on the other side of the car. The pair were gunned down as they got out of the vehicle before they had a chance to enter the restaurant 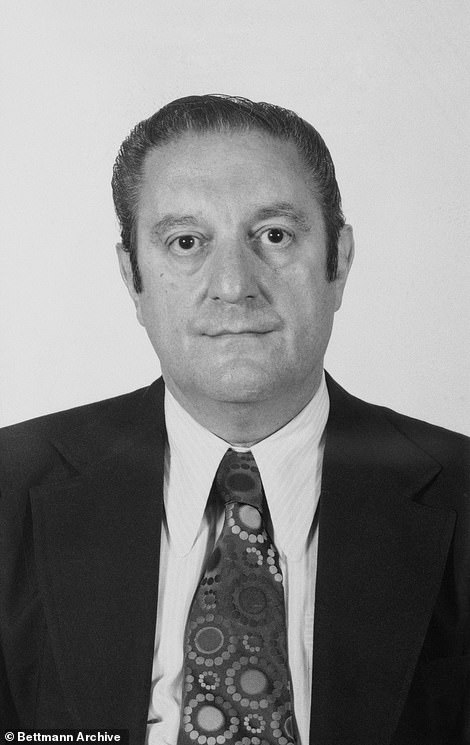 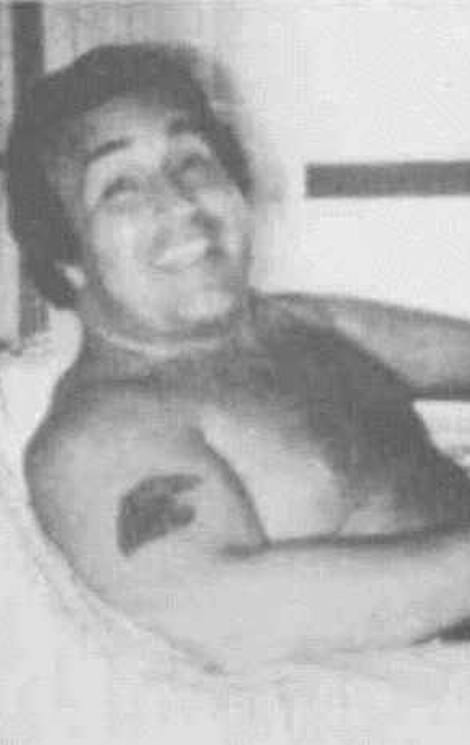 Paul Castellano (left) was the Gambino crime boss from 1976 until 1985, when he and Thomas Bilotti (right) were gunned down getting out of their car at the Sparks Steakhouse

Their bodies were left in the street, next to the car Bilotti had driven them in, for hours afterwards.

Gotti’s number two, Frank DeCicco, was blown up in a car bomb explosion the following year which he narrowly avoided. DeCicco is also buried in the cemetery in New Drop.

The failed assassination on Gotti contributed to his nickname, The Teflon Don. He was meant to be in the car with DeCicco but decided not to go at the last minute.

Gotti died in 2002 in prison after a lengthy cancer battle. He is buried in St. John’s Cemetery in Queens along with other members of the family. 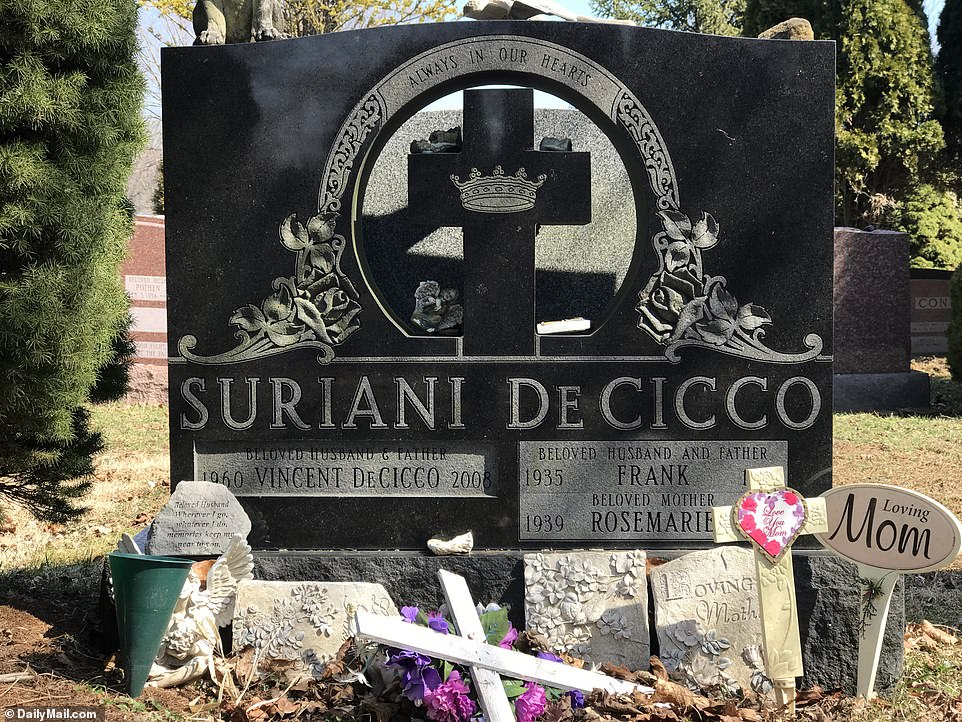 Frank DeCicco is buried with his wife Rosemarie and their son, Vincent, who died in 2008 in a plot near the mausoleums. DeCicco died in a car bomb explosion in 1986 shortly after John Gotti took power of the family 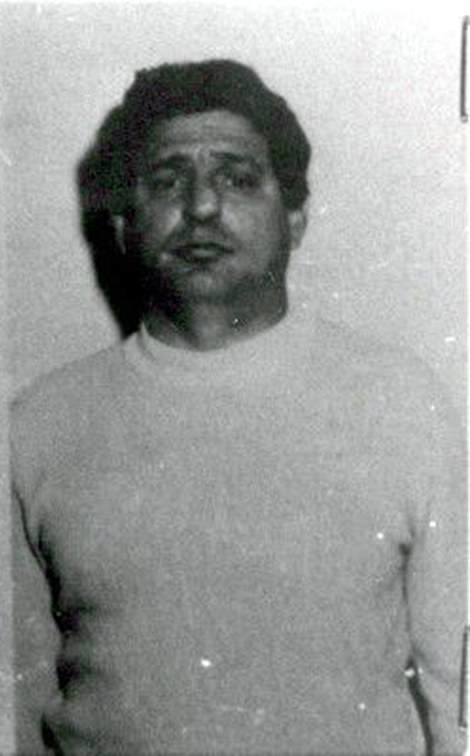 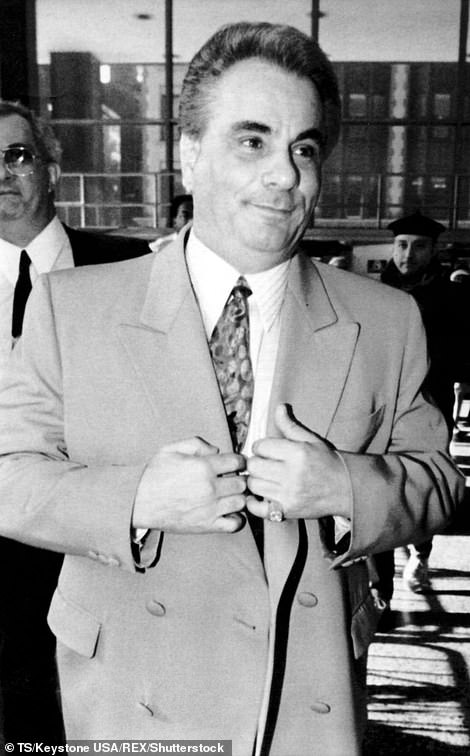 Frank DeCicco was John Gotti’s underboss and was blown up in a car bomb that was intended for Gotti in 1986.  John Gotti, the Teflon Don, died in prison in 2002. He is buried at a different cemetery in Queens

While Castellano, Bilotti and DeCicco were murdered in unmistakable hits from their rivals, Cali’s death remains somewhat of a mystery.

The man accused of killing him – Anthony Comello – is yet to offer a motive. He appeared in court this week with MAGA forever written on his hand.

Sources have claimed their dispute may have been over Cali’s apparent refusal to allow Comello to date his niece.

His funeral on Tuesday was monitored by police who photographed men carrying his body out of a funeral home and racing towards the cemetery.

Afterwards, a reporter who had gone into the cemetery to ask questions was reportedly confronted by one of the mourners who said: ‘Get the f**k out of here before I blow your f*****g head off.’ 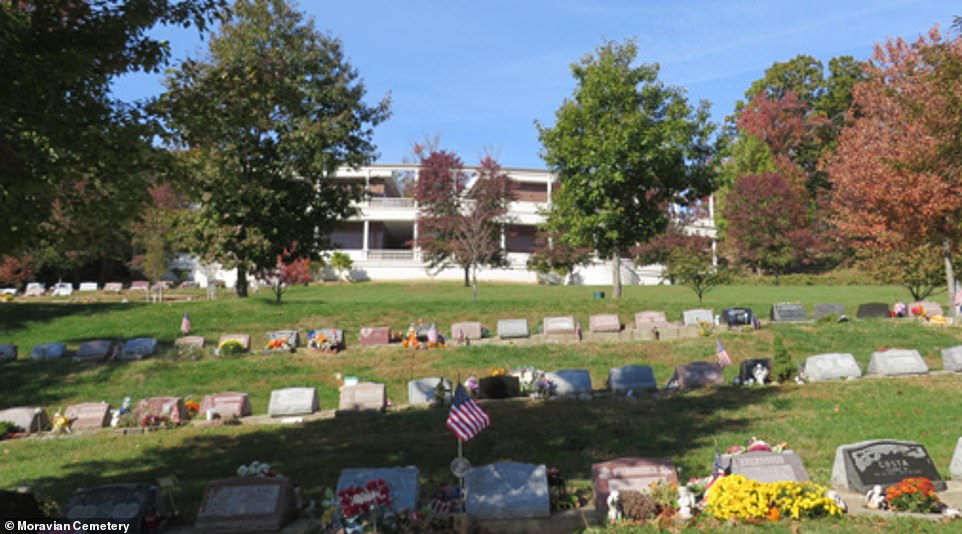 The mausoleum where Cali’s body is held is holds a few thousand, coveted spots for crypts and niches for urns