Paris: Investigators are converging around two theories of what caused the devastating fire at Notre-Dame Cathedral: a short-circuit near its spire, possibly caused by electrified bells, or negligence by workers carrying out renovations, perhaps linked to the discovery of cigarette butts. 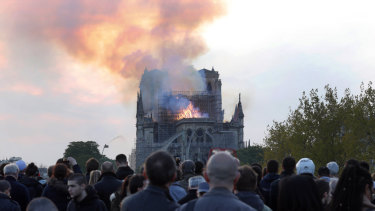 Top theories for the cause of the blaze at Notre-Dame cathedral have emerged. Credit:AP

More than a week after the catastrophic fire shook France and gripped the world, toppling the cathedral's spire and leading to an outpouring of support, investigators are still seeking a cause of the blaze.

On Thursday, for the first time, police investigators were allowed to search the cathedral's vast interior for clues, said a police official who was not authorised to speak to the news media and requested anonymity.

The investigators had been prevented from going into the cathedral because of concerns about the stability of the damaged structure, whose stone was weakened in the intense heat, the official said.

The official said that so far nothing was being ruled out and that the investigation could last several weeks. It was being complicated by the intensity of the blaze, as well as by the tonnes of water used by firefighters to put it out, both of which destroyed evidence.

But the official said the investigators had already interrogated dozens of individuals, including workers, company officials, cathedral staff, architects and others in the local government.

So far attention has focused on a number of electrical installations near the spire, including a series of six mid-size bells, according to officials with knowledge of the complex interplay of elements that existed until 10 days ago at the church summit.

Police have also found cigarette butts on the scaffolding — a possible explanation for the blaze, though one strongly disputed by a spokesman for the company that erected it. Restoration work had begun at the church before the fire, and much of the building was sheathed in scaffolding.

The police official confirmed, however, that smoking — forbidden under company rules — was being considered as a cause, among others.