It's hard to imagine a more poignant symbol of society eating its young than the soporific 11-year-old Joshua Trump, pressed into his suit and passed-out during Donald Trump’s delayed State of the Union address. 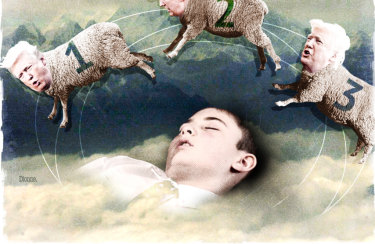 For me, this image, and Joshua’s painful and cringeworthy predicament, framed a week remarkable only for intensifying public disillusionment with leaders and major institutions – the police and the legal profession (after new revelations in the Informer 3838 scandal), the political process (too many controversies to list), the banks (the now former National Australia Bank chief Andrew Thorburn had scheduled long-service leave around the time the banking royal commission handed down its final report because, after all, nothin’ doin at the office), the racing industry (she noticed out of the corner of her eye). 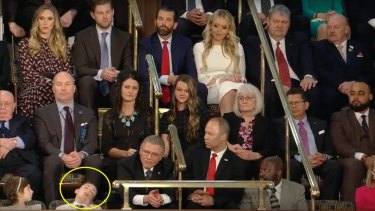 Sixth-grade student Joshua Trump earned a legion of fans online after falling asleep during the State of the Union.

The whole episode speaks of children forced to navigate a world of venal, damaged and impotent adults.

Joshua from Delaware has the grave misfortune of sharing a surname with a president who is both the cause and response to a crisis of liberal democracy. For this the boy was relentlessly mocked and teased, called stupid and an “idiot”. At one stage his school instructed teachers not to use his surname any more. The bullying got so bad his parents pulled him out of school in 2017 and home-schooled him for a year. Children, as we know, can be horrid. Adults can be even worse.

His plight came to the attention of the first lady, whose stated priority in the White House is combatting bullying, especially online bullying. I hardly need to explain why that fact alone is a meta-troll; her husband methodically dumps personalised abuse on everyone, with a special venom reserved for ethnic minorities, the disabled, all categories of marginalised people and women. “Horseface”, he tweeted in October about adult-film star Stormy Daniels, who claims she had a sexual relationship with him, and I imagine at that moment he was exercising restraint.

Presumably the ordeal of many a bullied child comes to Melania’s attention, and no doubt in many cases the fallout is as upsetting as that experienced by Joshua, if not more so. Yet of all the bullied kids from sea to shining sea, Melania and her husband asked this one to the capital to hear the President’s State of the Union address, inviting an outpouring of undeniably deserved sympathy for this child who reportedly likes science, art and history – and arguably further traumatising and stigmatising him through official association with a White House likely to be judged among the most ignoble, corrupt, irrational, un-artful and breathtakingly idiotic in US history. Hard for Joshua to deny any link to the President now. And the man could well end up in the can.

The 11-year-old makes an ideal target for Trump’s narcissistic projection. Victimised for bearing the President’s surname, Joshua is a perfect conduit for Trump’s narrative about his own victimisation. See how much people are out to get me! – you can almost hear his nasally lament. Why, the democrats, the elites, Robert Mueller, The Times and The Post have whipped up so much hatred against him that innocent schoolboys suffer the consequences. Thus the bullied Joshua, paraded before America and the world as Trump’s sanctified victim of choice, becomes the subliminal flag-bearer and stand-in for a bullying President.

And just to prove the Trumpists don’t hold a monopoly on narcissistic projection, Joshua woke from his State of the Union nap to find he’d metamorphosed into a meme. His slumbering image gone viral, progressives hailed him as a secret “hero” of the anti-Trump “resistance.”

“We are all Joshua Trump,” the Twitterati gloated, in loving taunts that may niggle at him well into adulthood, though I’d hope Joshua will by then have amassed a vast reservoir of resilience from which to draw.

I’m less optimistic about the prospects of a “resistance” movement that deems sleep the perfect response to Trump’s extended poor-me rant against “ridiculous partisan investigations,” his exhortations about illegal immigration and so on. Just like these same progressive warriors were themselves caught sleeping as racists mobilised across the West. Just as they yawned while Trump shouted “lock her up,” during the 2016 election campaign, working his supporters into an unconstitutional frenzy. Just as their sluggish “whatever” ambivalence about the relative merits of liberal democracy helped create a fertile breeding ground for Russian social media bots whose creators are not at all ambivalent about undermining liberal democracy. Just as their urbane peers across the Atlantic in London couldn’t be bothered dragging themselves out of bed the day of the Brexit vote and are now gaping in disbelief as their collective future teeters at the edge of a cliff.

I’m moralising, which I don’t relish at all. It’s just that our kids are growing up in a world largely devoid of role models – where people in power bend the rules, break the rules, negate or outright demolish the truth – and I hope they’ll be alright, but some days despair gets the better of me.

Julie Szego is a regular columnist.