Singapore: Australia’s attempts to ease south-east Asian anxiety about its submarine ambitions continue to fall short, with Malaysia deeply concerned despite acknowledging the difference between nuclear power and nuclear arms.

The Philippines, Singapore and Vietnam have welcomed the AUKUS pact between Australia, the United States and the United Kingdom, as well as Australia’s plans to enhance its military capability with varying degrees of enthusiasm. But Indonesia and Malaysia are fearful its acquisition of nuclear-propelled submarines will ramp up tension and trigger an arms build-up in the region. 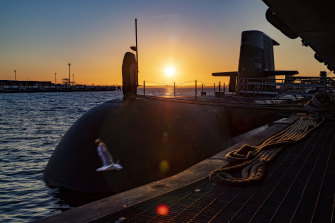 Australia plans to acquire the technology for nuclear-powered submarines under the new AUKUS pact with the United States and the United Kingdom.Credit:Getty

It is a view not disputed by Rafael Grossi, the director general of the International Atomic Energy Agency, who on Wednesday said the prospect of other countries seeking to follow Australia and develop their own nuclear-powered submarines “cannot be excluded”.

The Morrison government has sought to address consternation in Jakarta and Kuala Lumpur by sending Vice Admiral David Johnston, the Vice Chief of the Defence Force, to the region for talks but two of Australia’s most important neighbours are unconvinced.

“Marise Payne, the Foreign Minister, spoke to me twice on the phone. Immediately after the announcement [last month] and also last week after they sent their Vice Admiral to brief us on what the submarine [plan] is all about,” Malaysia Foreign Minister Saifuddin Abdullah told the Foreign Policy Community of Indonesia on Wednesday during a visit to Jakarta.

“She tried her level best and her team tried their level best to impress upon us that it is a nuclear-propelled submarine but not a nuclear-armed submarine. We take it at face value that’s what it is because it is still a work in progress. But we were very clear about sending our message of concern to Canberra.” 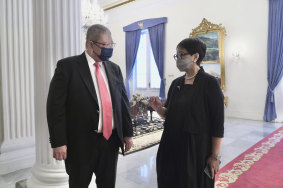 Saifuddin said nuclear power was “not something that will make Malaysians and I believe many ASEAN people comfortable”.

“We know the difference between nuclear arms and using nuclear for scientific purposes,” he said. “But when I talk to my friends they always remind me ‘it is a submarine’. Whether it is nuclear-propelled and not nuclear armed, it is a submarine. What do you use a submarine for?“

He said some ASEAN member nations would raise the issue with Australia, a dialogue partner of the regional bloc, when leaders convened for a three-day virtual summit next week.

“During the next ASEAN [leaders meeting] there is the ASEAN-Australia summit. I believe some member states want to raise the issue with Australia during the summit,” he said.

“I don’t think it is useful to evaluate whether we are satisfied with [Australia’s] explanation. The issue is still there.“

Saifuddin was speaking a day after Australia and Malaysia celebrated 50 years of the Five Power Defence Arrangements, which also includes the UK, Singapore and New Zealand, with a flyover in Singapore.

He said Malaysia didn’t want to have to choose sides in the geopolitical rivalry between the US and China.

“We feel the heat but we want to maintain our neutrality,” he said.

Malaysia has faced increasing incursions into its airspace and waters by China, and as recently as a fortnight ago it summoned Beijing’s ambassador to lodge its latest protest.

Even so, Saifuddin said Malaysia’s relations had improved with China, its top trading partner and investor, “despite what happened in the South China Sea”.

Grossi, the head of the IAEA, the United Nations nuclear watchdog, said Australia’s pursuit of a fleet of nuclear-powered submarines as a non-nuclear armed nation needed to be closely monitored.

“We have to have specific agreements to make sure that whatever they receive technology-wise or material-wise, is under safeguards,” he said.

“There has to be a specific arrangement with the IAEA… which has never been done before and it’s a very, very demanding process.”