A walker fell to his death in front of horrified onlookers on Snowdon on the same day that the mountain was packed with hikers, rescuers revealed last night.

The tragedy took place on the busy peak in Snowdonia National Park, Wales, on Sunday, according to rescuers, who carried out seven rescues throughout the day.

The fall occurred on Crib Goch, which has been the scene of numerous tragedies, and is the third fatality on Snowdon in as many weeks.

It came on the same day that scores of walkers were seen stood crammed in queues near the top of the highest mountain in Wales. 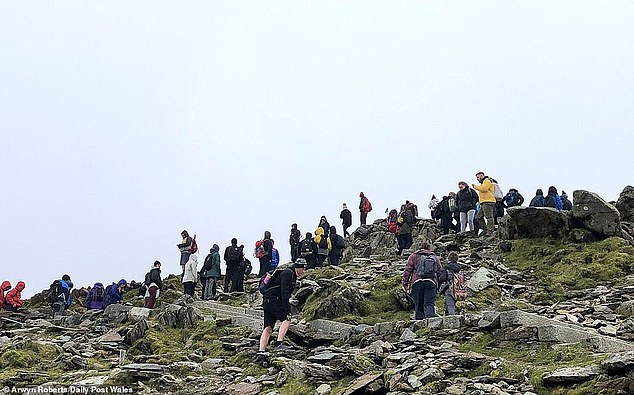 Crowds of walkers seen gathering near the top of the mountain over the weekend. Llanberis mountain rescue team, Britain’s busiest, carried out seven rescues on Sunday alone 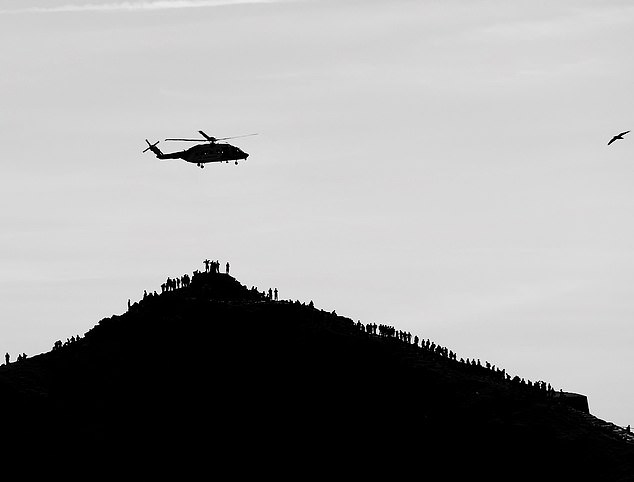 A helicopter pictured at Snowdon in Snowdonia National Park, Wales on Sunday. Llanberis mountain rescue team passed on their ‘sincere condolences to the family and friends’ of the walker 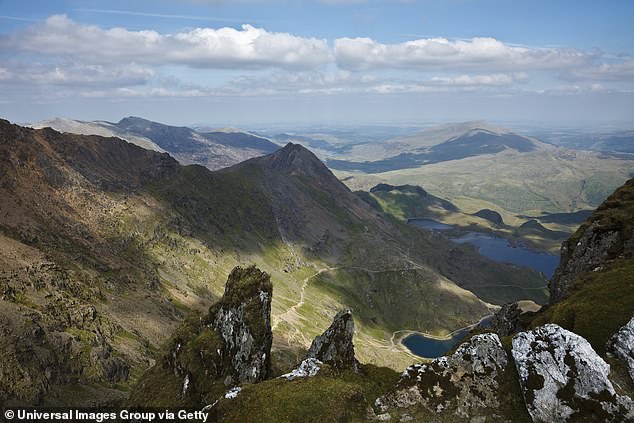 A view to Crib Goch, the narrow ridge from where the walker fell and which has been the scene of numerous tragedies, and the Pyg Track with Llyn Glaslyn and Llyn Llydaw

One walker died after falling a ‘significant’ distance at the Pyg Track on September 9, and another hiker plunged two days later, on September 11, after collapsing near the Bwlch Main peak.

Llanberis mountain rescue team, Britain’s busiest, said: ‘One of the incidents we attended on Sunday was after receiving several reports from North Wales Police that a walker had been reported as falling a considerable distance from the Crib Goch ridge.

‘With assistance from the Wales Air Ambulance Charity helicopter Helimed 61, four team members were lifted to support the onboard Doctor and medics.

‘Unfortunately, the walker was found not to have survived their injuries.

‘The Team would like to pass on our sincere condolences to the family and friends at what must be a very difficult time.’

The crowded scenes were spotted hours after it was revealed that 60 per cent of the Welsh population will be put under lockdown from Monday after three more council areas were added to the Government’s list.

Arwyn Roberts, from Llangefni, who climbs the peak once a week said he was ‘quite shocked’ by the scenes and described how the queue extended for 200 to 300 metres.

He told North Wales Live: ‘I managed to find somewhere to park and I had planned to take a quieter route up the mountain – but there were no quieter routes. 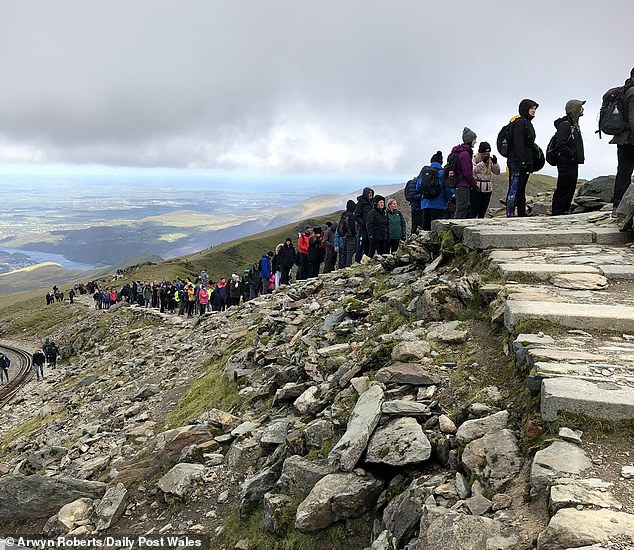 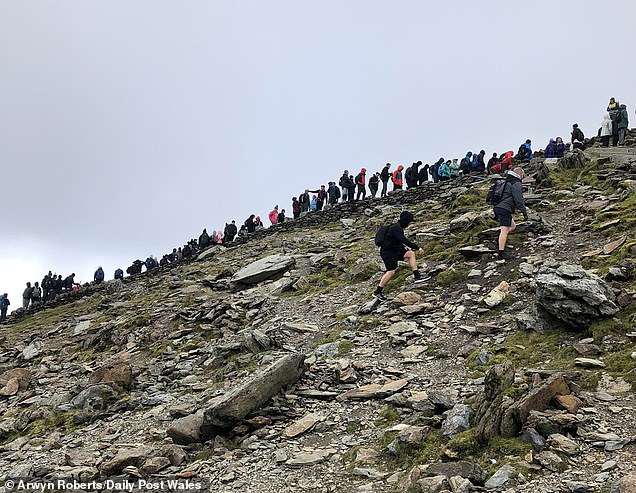 Hundreds of walkers queued to reach the summit of Mount Snowdon in Snowdonia National Park, Wales, last weekend despite the strict coronavirus rules

‘I usually walk up the mountain first thing in the morning and I haven’t been there at the weekend for a long time, so I was quite shocked by what I saw.

‘Even from below you could see the line of people stretching down the mountain from the summit. The queue was already 200 to 300 metres when I reached the top.’

A spokesperson for Snowdonia National Park said earlier this week: ‘This season has been the busiest we’ve ever seen it on Snowdon and queuing for the summit has become a regular weekend sight.

‘It’s been a good boost for tourism businesses after huge losses for them in lockdown, and the majority of visitors have been respectful of each other and of the area, but the vast numbers do raise a number of challenges for us in looking after the National Park.

‘We’re urging hikers to think about how busy the areas they’re visiting are likely to be when planning their trip with Covid being on the rise again and to make sure they are adhering their own local as well as national Welsh restrictions and guidance.’

MailOnline has reached out to North Wales Police.

Pay to climb Snowdon? Council wants to charge visitors a ‘considerable fee’ to scale Wales’ highest peak amid fears of damage from ‘over tourism’

A council has debated charging visitors ‘a considerable fee’ to scale Wales’ highest peak amid fears of damage from ‘over tourism’.

A motion by councillor Glyn Daniels, who represents the constituency Diffwys a Maenofferen, to charge tourists visiting Snowdonia was debated by Gwynedd council yesterday.

It follows holidaymakers swarming to the beauty spot in Snowdonia National Park, Wales, in July and August this year as lockdown restrictions were eased. 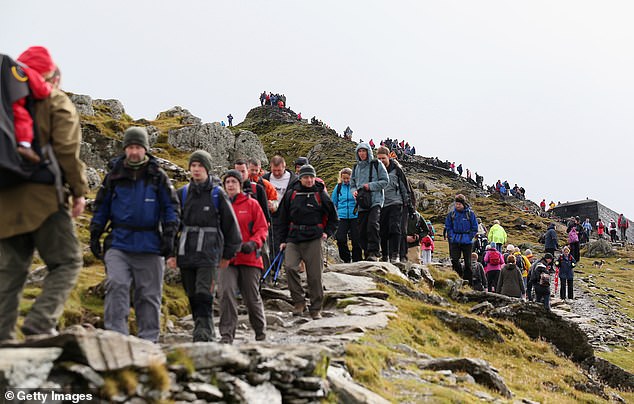 An unusually large number of hill walkers pictured making their way to the summit of Snowdon in Wales in September 2013, as the council considers charging visitors a ‘considerable fee’

Long queues of climbers lining up to reach Snowdon’s summit were pictured on Bank Holiday weekend last year, with locals blaming the Welsh Government for the overcrowding by claiming ‘heavy promotion’ brought a surge in tourists.

Mr Daniels’ motion reads: ‘I propose that Gwynedd Council, in collaboration with Snowdonia National Park, urgently investigates the possibility of charging tourists who visit parts of the Park, particularly on and around Snowdon itself.

‘I believe this would be advantageous in more than one way.’

It suggests charging a ‘considerable fee’ for visiting the summit, adding that it could ‘boost the coffers of Gwynedd Council and the Park at a time when we are facing financial uncertainty owing to the side-effects of Covid 19’.

The motion concludes: ‘Consequently, there is room to believe that such steps could contribute to reducing the serious problems of excess cars causing traffic jams and hazards on the region’s roads.’

However, the national park said that the law would need to be changed in order to enforce the fee. 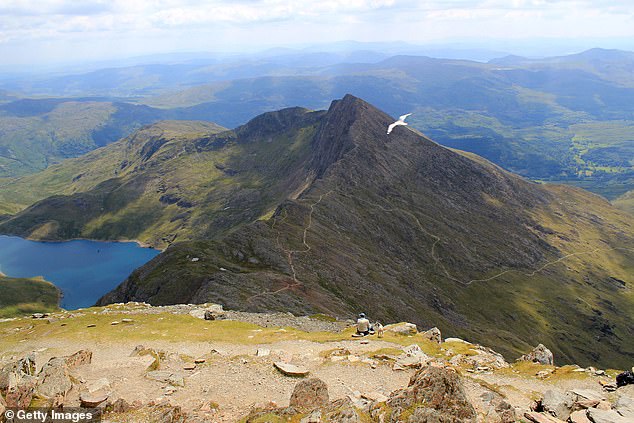 On a clear day at Snowdon’s summit (pictured above), hikers can enjoy expansive views of Britain. It takes around six to eight hours to get to the top and back

A spokesperson told NorthWalesLive: ‘Currently, it would not be legal or enforceable to charge a toll on Yr Wyddfa (Snowdon) due to the Countryside and Right of Way Act which allows access for all to certain areas of the countryside,’ said a spokesperson.

‘In addition, Welsh national parks do not have local tax raising powers. Our work is funded by Welsh Government – for the three national parks of Wales it costs each Welsh citizen £4 per year.’

First Minister Mark Drakeford added: ‘The tourism industry is extremely important to north Wales, and the solution to the problems is dependent on bringing people together around the table to think about how we can give extremely good experiences to people who come to us, that are part of the local economy, and at the same time protect the things that people come to Wales to see and enjoy.’

On a clear day at Snowdon’s summit, hikers can enjoy expansive views of Britain. It takes around six to eight hours to get to the top and back.

There are six recommended paths, with the nine-mile Llanberis Path the most popular among those wanting to reach the summit for the first time.

Though the path is the longest route, it provides a gradual climb up to the mountain.