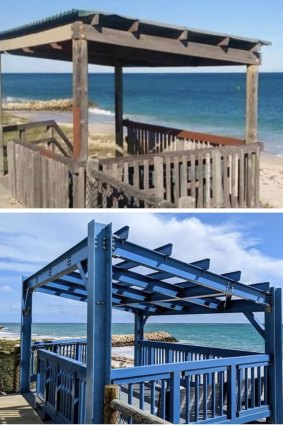 The new Quinns Rock lookout and beach access was made of wood, but now is made from fibre-reinforced plastic.

A new access point and observation platform at a popular beach in Perth’s northern suburbs has undergone an upgrade with an almost-$400,000 price tag, which has sparked an outcry from residents.

The demolition and removal of the original structure at the Quinns Beach Mary Street access point in Quinns Rock was recommended after an assessment of its safety, and a new one was designed and manufactured. The process cost ratepayers $386,682.

The City Of Wanneroo Residents & Ratepayers’ Association Facebook page indicated many were sceptical about the cost, with their rates already at “eye-watering” levels.

One resident stated the build was a “waste of money,” while another said a house could be built for a similar price.

But speaking to Radio 6PR on Thursday, City of Wanneroo Mayor Linda Aitkin said it was a public structure and was held to different standards than a private build.

She said the structure cost was also a necessity to protect the surrounding dunes and coastline.

“We’ve spent millions protecting that coastline over the years,” she said.

“We also have to make sure it’s safe, and put the foundations down very deep on it. It needs to be sea protected, with the salt air, and we have to include disability access.

“We’re held to a high standard as it is a public-used viewing platform, we have to make sure it’s safe at all times and there’s no risk for the community.”

She said the new structure was made from fibre-reinforced plastic, which was more durable and would reduce future maintenance costs, and that it would last more than 25 years.

Aitkin said the project cost was “an average figure for a project of this scale,” and was comparable to ones put in four years ago.

“This is just what we have to deal with in local government. If people want the process and if they want the access to the beach, we have guidelines we have to follow and that is restrictive, but that’s what we have to do to be able to provide the services and the facilities to the community,” she said.

The structure has almost been completed, with the roof still to be added.