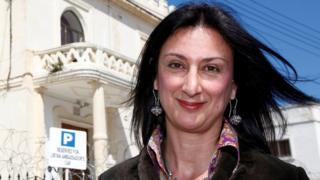 Once every few months I have to sit in a room with the person investigating my mother’s murder. Our family first encountered him six years ago, when he came to our home to arrest her.

My mother had published a satirical blog post about a candidate for prime minister on election day and one of his supporters filed a police report.

So, the detective was sent to our family home in the middle of the night with a signed warrant to arrest her for the crime of what can only be called illegal expression.

I was working on the other side of the world and people were sending me videos of her being released from the police station at 01:30, wearing my father’s shirt.

A few hours later, she was back online and writing about this abuse on her website, in-between mocking the new prime minister’s insecurities and poking fun at her own appearance.

“I apologise for being in total disarray but when the homicide squad turns up at your home to arrest you at night… brushing your hair, bringing out the powder and blusher and sorting out some fetching clothes are the last thing on your mind,” she wrote.

Now, the same detective who arrested my mother that night finds himself in charge of the investigation into her murder.

On the day she was killed my mother, Daphne Caruana Galizia, drove to the bank to regain control of her account, which had been frozen at the request of a government minister.

She had just turned 53 and was at the peak of her 30-year career as a journalist.

Half a kilo (1lb) of TNT packed into a device under her car seat was remotely detonated.

Supporters of the government openly celebrated the assassination, reminding me of those who celebrated the shooting of Turkish-Armenian newspaper editor Hrant Dink.

Others insinuated that I had planned the murder myself, or that my mother had happily risked her life – the same slander that was repeated about James Foley, the US correspondent who was abducted and beheaded in Syria.

The murder of Daphne Caruana Galizia

Why do these murders matter so much?

“The free flow of facts and opinions, the stock and trade of journalists, creates societies that are fairer and freer,” my brother told a gathering of European diplomats, while we were still reeling from our loss.

After our mother’s murder, our only light was the outpouring of support, remorse, sadness and regret coming from all kinds of people.

It surprised me and brought to mind something that a friend once told me: “Good people are everywhere; you have to find them.”

The desire to live in a society that’s free and open, where the law is the same for everyone and human rights are respected, is universal. But as with most desires it blows hot and cold.

It’s often too late when we realise that a few bad people, who, like human disease, will always be with us, have taken over.

The task that my brothers, my father and I have set out for ourselves since our mother’s murder is enormous: justice for her murder, justice for her investigations and making sure that nothing like this happens again.

There is now little time for anything else.

Within my family, we sometimes talk to each other about how little patience we have for the inaction and indifference of others, especially those in positions of authority.

We find it difficult not to attack their cynicism and their laziness.

The children of Turkish investigative journalist Ugur Mumcu told me that after their father was murdered with a car bomb, the chief of police excused their failure to investigate by saying: “We cannot do anything, there’s a brick wall in front of us.”

Their mother’s reply to this was: “So remove one brick, then another, until you take the whole wall down.”

That is what we have been doing ever since our mother was murdered.

My guiding principle at the beginning was to do our best come what may. I now think that the process is almost as important as our goals.

We’re forcing cultural change and generating more respect for free expression by the simple act of making the state do its duty and deliver justice.

We’ve joined others who are eradicating the disease of “unfreedom” and teaching the world a new respect for human rights in the process.

“Freedom starts with freedom of conscience,” the writer Yameen Rasheed told us five days before he was stabbed to death outside his home in the Maldives in 2017.

“Without that fundamental freedom of the mind, what would you do with the other freedoms?”

Like my mother’s, his murder showed that there was no respect for those freedoms in our countries.

It’s not just up to us, the ones left behind, to take up that fight for freedom: the family members, girlfriends, boyfriends and friends of murdered and imprisoned journalists.

This great responsibility has landed on our shoulders but we cannot carry it alone. We need good people everywhere to join us.

I know there are more of us. Remember that Saudi columnist Jamal Khashoggi was loved by people everywhere.

It was only one person who hated him enough to have the writer killed.

In all of these murders, including my mother’s, there is little or no sign that the state is making a meaningful effort to convict the people who are ultimately responsible.

So, we’ve started by removing the first brick: demanding Malta launches a public inquiry to find out for itself where it went wrong in preventing the murder of its most important journalist.

Then, we’ll move on to the next brick.

Every day, I wish my mother never had to make this sacrifice on behalf of her country and I would much rather she were still alive.

But like Khadija Ismailova, an Azeri journalist whose imprisonment was described as “outrageous” by human rights groups, said: “If we really love, we want our loved ones to be who they are. And this is who Daphne was – fighter and hero.”

What my mother will never know is that her death inspired thousands of acts of heroism, in Malta and beyond.

And I like to think that each one of these acts has, in one way or another, protected other brave journalists from my mother’s fate.