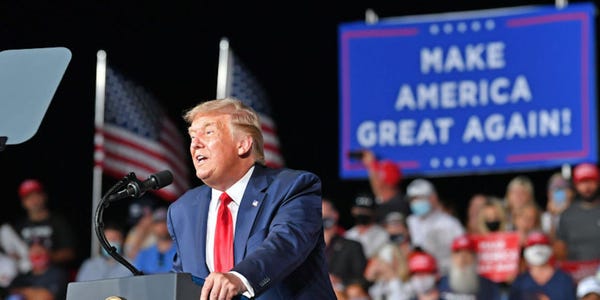 A viral video captured a contentious moment Saturday between pro and anti-Trump demonstrators in Washington state when an apparent supporter of the president pulled a gun on the anti-Trump protesters.

The demonstration took place Saturday in Woodinville, just about 25 miles northeast of Seattle, According to NBC-affiliate King5. The Seattle Times reported that there were about 15 people involved in the altercation, which occurred at around 3:30 p.m. on Saturday as the demonstrations were ending.

Mandy Luttinen, who was at the demonstration, told King5 that the pro-Trump rally had been small and mostly uneventful until the end when an individual appeared and threw some sort of liquid — from what she called a "bucket of dirty water" — on supporters of President Trump.

After some of the president's supporters were hit with the liquid, a man wearing a camouflage hat inscribed with "Trump" in yellow text pulled out a handgun and pointed it toward the anti-Trump demonstrators, the viral video of the incident, which has received more than 3.3 million views on Twitter, shows.

Kathleen Larson, the Woodinville chief of police, told Insider on Monday that an investigation into the incident is ongoing and no arrests have been made. Larson said once Woodinville Police had put a case together, they would forward it to local prosecutors to determine whether charges should be filed against any of the involved individuals.

Police still haven't been able to determine what was in the liquid, although Larson said it looked there was "tobacco sediment at the bottom." The man in the video who brandished his gun, which he had a license to carry,  suffered burns to his eyes and around his lips, requiring medics to flush his eyes, she said.

Larson told Insider that police were still working to identify the man who threw the liquid, and said several pieces of video have been compiled to help them piece together the incident.

The man who brandished his weapon remained on the scene and has cooperated with the police investigation, Larson said.