The Andrews government’s new pandemic legislation was put to its first major test this week as authorities sought to address the threat posed by the highly infectious Omicron variant of COVID-19.

The controversial laws, which the state opposition and various interest groups argued would lead to more lockdowns, were used to implement a set of restrictions less onerous than those that the state’s public health team had pushed for. 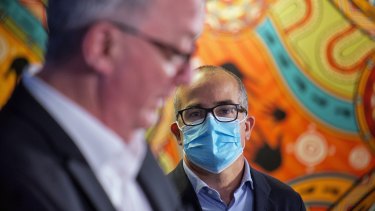 Chief Health Officer Brett Sutton’s advice for everyone aged eight years and older to wear a mask inside – except in private homes – was accepted by Health Minister Martin Foley. Professor Sutton’s other suggestions, to implement density limits in hospitality businesses and prohibit dancing on dance floors, were not implemented.

Mr Foley told reporters yesterday that he needed to consider not just the public health issues in his decision, but the economic, social and human rights impact of restrictions.

This is not to say Professor Sutton’s advice was in some way wrong. His role in government is valued by Mr Foley, but the government calculated that strict mask rules, speeding up the booster program (which was announced today by federal Health Minister Greg Hunt) and a focus on test and trace – the recommendations of the Australia’s chief health advisory body this week – would be enough to stop Omicron from raging over Christmas.

Omicron cases are surging in NSW, where density caps were implemented alongside a mask mandate yesterday. They are increasing more slowly in Victoria, though experts say the state will soon experience the same rapid spike in case numbers and the mask mandate is a sensible measure to slow the spread of COVID-19.

One minister told The Age that density caps were not out of the question in coming weeks if Victoria’s Omicron case trajectory followed NSW, or if early evidence that the variant caused milder disease was disproven. A senior health official told The Age on Wednesday that Australian Open crowds could be capped if cases rose sharply in January.

Ultimately, the government decided the public health situation did not yet necessitate a stricter set of rules that would disrupt Christmas plans and create anxiety and frustration after 18 months of chaos. Time will tell whether this was the right call, but governments are elected to make decisions based on a broad range of factors and the cabinet’s appetite for risk was clearly greater than Professor Sutton’s.

“I do have an obligation to seek wider views, be they economic, social, cultural, mental health,” Mr Foley said when he announced the rules on Thursday. “I’ve acted overwhelmingly in accordance with Brett’s advice … [and] arrived at what I consider to be a measured, appropriate and proportionate set of outcomes.”

The government may face criticism for not following, in full, the health advice. However, this criticism only has legs because politicians have so often sought to defend controversial decisions during the pandemic on the basis that they are following “health advice”. 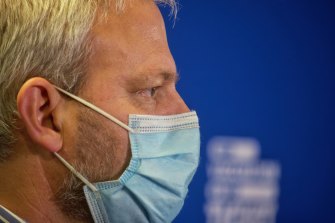 The rejection of density caps also highlights the government’s sensitivity to criticism that it is over-zealous in its application of public health rules. It has had a messy few months and a summer of hysterical media coverage was undesirable because it would have given the Coalition the ability to set an election year narrative that Labor was always a moment away from imposing new rules.

The advice from Professor Sutton will be publicly released in coming weeks. There is a question about whether the more controversial elements of his advice may have been delivered verbally to avoid their publication in written form, but a source told The Age the full advice would be published.

In no other state would rejected public health recommendations be published. This is a condition of Victoria’s new laws.

While the manner in which they were legislated was messy and vitriolic, the final laws have just faced their first proper test and passed.

They have delivered a swift, firm and measured response to Omicron with a level of transparency unique in Australia.