Residents in large parts of Victoria have been told to brace for damaging winds, heavy rain, large hailstones and flash flooding as storms develop in the state’s northeast on Wednesday afternoon.

The weather pattern is the result of tropical moisture extending south from the Coral Sea colliding with an upper trough travelling across eastern Australia and has the potential to lead to severe thunderstorms. 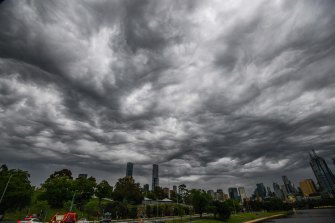 Severe weather conditions are expected to persist in Victoria through to the weekend. Credit:Joe Armao

The Bureau of Meteorology issued a severe weather warning for central and eastern Victoria on Wednesday afternoon, warning the thunderstorms could cause damage in Seymour, Maryborough, Castlemaine, Kyneton, Ballarat and Bacchus Marsh on Wednesday.

Other locations likely to be impacted by water surges in the coming hours are Shepparton, Wodonga, Wangaratta, Bright and Falls Creek.

Damaging winds with gusts of up to 90km/h are also forecast to develop in parts of the central Victorian coastline on Wednesday evening, before easing in the early hours of Thursday.

The wet weather is forecast to extend into the weekend, with the bureau predicting rainfall of between 10 millimetres and 50 millimetres in most parts of the state on Thursday increasing to about 100 millimetres south of Wodonga on Saturday.

Fruit growers across Victoria have been warned the wet weather and high humidity on Wednesday and Thursday could lead to a heavy outbreak of brown rot, a fungal disease affecting peach, plum, cherry, apricot and nectarine trees.

Victoria’s State Emergency Service is urging people to refrain from driving if road conditions are dangerous and to pull away from trees, drains, floodwater and low-lying areas if already on the road. Heavy rainfall could also increase the potential for landslides and debris across roads.

Residents in affected areas should tie down loose items such as outdoor settings, umbrellas, and trampolines, and move cars and other vehicles undercover and away from trees.

People outdoors should steer clear of power lines, trees, gutters and drains, and move into a safe indoor location away from windows.

Bureau meteorologist Jonathan How said the wet weather would extend to NSW, Tasmania and the ACT and likely lead to further warnings later in the week.

“Shower and storm activity will increase on Wednesday mostly through central Victoria and southern NSW,” he said.

“Heavy rain, damaging winds, and hail are all risks, including for Melbourne.”

Mr How said the weather pattern would move towards eastern Victoria and NSW over the weekend, impacting Sydney and Canberra and bringing an increased flood risk to saturated catchments.