Victoria’s building sector has shrugged off the effects of Melbourne’s sixth lockdown to lead the nation in activity for the first time, according to the latest data, with more than $15 billion of work done between July and September.

A leading economist says the performance of the state’s building industry, often at the eye of a storm of controversy during lockdowns, may have saved the national economy from a harder landing than expected in the September quarter. 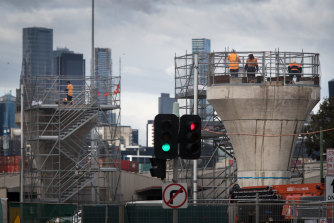 The state’s 5.8 per cent growth in construction work came against sharp falls in the other two “lockdown” jurisdictions. Building in NSW went backwards by more than 8 per cent to $14.9 billion and the sector’s output in the ACT was in freefall, down 15.5 per cent to $778 million, the Australian Bureau of Statistics confirmed on Wednesday.

Despite the national contraction in building work — by 0.3 per cent to about $54 billion — economists were pleasantly surprised by the figures, saying they indicated the hit to the national economy from the latest wave of COVID-19 lockdowns, to be revealed in next week’s national accounts,  will not be as hard as feared.

Victoria’s strong result was driven by growth in infrastructure building of nearly 12 per cent to more than $5 billion in the quarter, despite Melbourne being locked down for a month of that period with construction working at reduced capacity for most of the lockdown and shut completely for two weeks in September and October.

Residential building in the state, including renovations and conversions, recorded some growth in the quarter — 2.6 per cent and 3.2 per cent respectively — but Victoria’s huge infrastructure program led the way.

ANZ senior economist Catherine Birch said the sector had been making up for time lost to 2020’s long lockdown.

“On the infrastructure side, Victoria – along with NSW – has a very big pipeline of projects to work on and one of [Victoria’s] focuses did seem to be catching up on some of the activity they couldn’t get done last year,” she said.

The strong recent performance strengthened the outlook for the national economy, the ANZ analyst said, which might not be as gloomy as previously predicted.

“I wasn’t expecting such a significant gain in Victoria, with overall construction work done up almost 6 per cent in the state,” Ms Birch told The Age. “That was, I think, the key factor that meant the national work done didn’t fall much as we were expecting.”

RMIT economics professor David Hayward, a close observer of Victoria’s budget and economy, said he, too, had been “very surprised” at the strong performance of the local building sector which he described as very good news for state Treasurer Tim Pallas.

“ He will be delighted with these numbers,” Professor Hayward said. “He’s been saying for some time that the Victorian economy’s in better position than people imagine and these numbers would confirm that to be accurate.”

The economist said he expected construction would continue to play a central role in the economic recovery as other sectors got back up and running.

“It’s still a steam train, and now they’ve taken the constraints off, it’ll pick up again and the other sectors, hospitality and everything, will start booming again as people go back to cafes and restaurants and pubs,” Professor Hayward said.