We are in the home straight for settling government budgets. The bean-counters in both Canberra and Spring Street are finalising their blueprints for May 2021. There is every sign that they will take opposite approaches, despite the shared goal of revitalising their respective economic patches. The feds will try to rein in spending and cool the growth in the economy, which has rebounded faster than expected. Victoria will continue to spend with the “create jobs no matter how” approach.

It is another point of difference between the Coalition feds and the Labor state. The PM is discovering the limits of bluff and bluster as he tries to convince the voters that the vaccine rollout is anything other than a horror show. 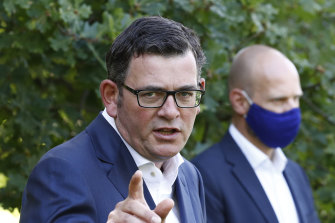 The ‘daily Dan’ showed the public the Premier was prepared to answer everyone’s questions.Credit:Getty

Contrast his communication strategy (if there is anything strategic about it) with the Andrews daily press conference during lockdown. The ‘daily Dan’ showed the public the Premier was prepared to answer everyone’s questions, including from highly combative antagonists. His tone was apologetic and earnest. He accepted responsibility, acknowledged errors, sacked ministers and his own top bureaucrat, and emerged bruised but mostly intact.

Morrison is increasingly looking like the emperor with no clothes … has anyone in his inner circle dared tell him his contrived and staged media appearances are alienating and counterproductive? That his style is patronising, passive-aggressive at best and bullying at worst? Do any of his inner sanctum carry enough influence to say “PM you have become the problem”? I doubt it.

The voters are not stupid. The level of public engagement on COVID-19 is off the charts. Everyone knows who promised which vaccine and when – we can readily track what has not happened. Is it a “war” as he has claimed – or another political challenge to be managed for electoral advantage?

The state budget has been fine-tuned during the forced absence of the Premier, but his fingerprints will be all over it. Daniel Andrews has been the infrastructure Premier, but it is hard to see how they could commission more in the city in the next few years. There are opportunities in regional Victoria, but capacity constraints of both skilled workers and raw materials are already starting to bite. 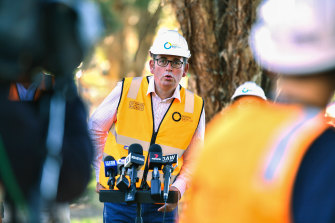 Daniel Andrews has been the infrastructure Premier.Credit:Joe Armao

If you want to create more jobs and continue to invest in rebuilding communal assets that COVID-19 has weakened, the next set of opportunities lies not with more overpasses and tunnels, but instead with timely investment in culture and the knowledge economy.

The arts and its diverse and fragmented communities have been amongst those hit the hardest by COVID-19. Musicians, writers, painters, potters, sculptors, actors, poets, illustrators, animators, photographers … the list is almost endless. Universities too are struggling yet their combined contribution to our communal wellbeing is immeasurable.

For reasons no one has been able to fathom, the Morrison Coalition government has maintained a hostility to higher education that matches their predecessors’ hostility to the car industry. COVID-19 created the crisis but the governments’ refusal to provide higher education with any support whatsoever has all but killed one of our biggest employers and a successful industry.

Pre-COVID-19 Melbourne was a leading educational destination. A blunt and brutal fee restructure imposed against advice has compounded the problem. Billions of dollars of hard-earned educational value have been destroyed in the blink of an eye. Clever country, anybody? 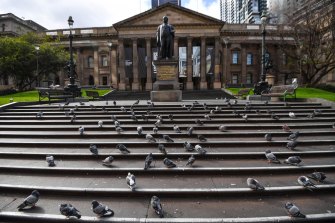 The anti-intellectualism extends to the treatment of the arts and other cultural institutions. The hostility goes way back. When Jeff Kennett won power in 1992 the construction of a new Melbourne Museum was already underway on the banks of the Yarra River. In an act of cultural vandalism that resonates to this day, the vision of an arts precinct adorning the river bank from St Kilda Road to Docklands, from the NGV to a relocated riverside museum, was sacrificed for the vulgar casino and the Convention Centre. The museum was dumped into Carlton Gardens, where it has always struggled to establish a presence.

The St Kilda Road NGV rightly attracts massive crowds and has become a major drawcard in its own right. The refurbished State Library in Swanston Street is now phenomenally successful and generates a buzz for that end of town. But what ought to be a third glittering jewel in the cultural crown, the Melbourne Museum, still suffers still from the overhang of the Kennett disruption.

Years ago, the NGV persuaded the state government to provide them with sufficient core funding to drop the entry fee. Instead, it has income from selling tickets to blockbusters as well as philanthropy and retail revenue. The Museum ought to be offered the same deal – as well as an overdue capital injection that allows it to resume its rightful place at the core of the life of the most cultural of Australian cities. Both the Carlton and ScienceWorks spaces are overdue for a major overhaul if they are to tell all of our stories – from the First Nations people, through the Gold Rush, manufacturing, bushfires and into the future.

If Victoria’s COVID-19 recovery is to be complete, it means injecting more than vaccines into the population. An injection of culture should follow.

Jon Faine is a regular columnist.