Singapore: Indonesia wants Australia’s acquisition of nuclear-propelled submarines to be monitored tightly by the United Nations watchdog, saying it is taking “a very serious interest” because its waters will be passed by such vessels.

Along with south-east Asian neighbour Malaysia, Indonesia has expressed consternation about Australia’s submarine ambitions since the AUKUS deal was unveiled last September. 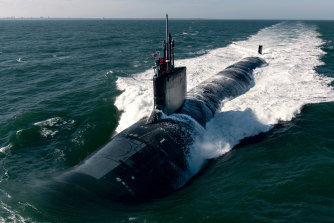 A US Virginia class submarine, which could form the basis of Australia’s planned nuclear-powered submarine fleet.Credit:US Navy

Now, Jakarta has raised major concerns about the sharing of nuclear technology for military purposes in a working paper for this week’s UN nuclear non-proliferation review conference in New York, highlighting safety issues with the transportation and use of highly enriched uranium and the risk of it being diverted to weapons programs.

Indonesia’s proposal for stricter regulations around the sharing of nuclear material to fuel submarines is being supported by Malaysia, according to Tri Tharyat, the director general for multilateral cooperation at Indonesia’s foreign ministry.

“As an archipelagic country, whether we like it or not, [Indonesia] will definitely be passed by nuclear-powered submarines and therefore we have a very serious interest in getting our proposals done,” he said.

“The bottom line is the use of nuclear energy for submarines should be monitored tightly by IAEA [International Atomic Energy Agency]. We hope through our working paper there will be attention and steps from the IAEA for an inspection, preventing proliferation from taking place.”

Indonesia’s submission to the conference was made in the same week that President Joko Widodo met with China leader Xi Jinping.

Beijing has made no secret of its opposition to Australia buying nuclear-powered submarines from the United States or United Kingdom under AUKUS, claiming it would be a dangerous precedent and a violation of the Treaty on the Non-Proliferation of Nuclear Weapons, known as the NPT.

While not mentioning Australia or AUKUS in its working paper, Indonesia also argued sharing of nuclear technology and materials for military purposes may be counter to the spirit and objective of the NPT. Without proper safeguards in place, such arrangements “could be exploited to provide a shield for diversion of that material to [a] nuclear weapons program,” it warned.

But ahead of the US conference, there was also an indication by Jakarta that it was trying to find a middle ground.

Tharyat even suggested there were “pros and cons” to plans by nuclear non-weapon states Australia and Brazil to get nuclear-propelled submarines. Brazil is developing a nuclear-powered submarine with France’s Naval Group, the company that Australia tore up a $90 billion deal with last year in a decision that at the time damaged bilateral relations with Paris.

“Indonesia wants – in line with our foreign policy, that is free and active – to contribute to the world’s peace and security. We want to bridge these two sharp differences through a concrete proposal which we hope can be discussed during the conference.”

The meeting in New York comes three weeks after a visit to Australia by Rafael Grossi, the director general of the IAEA, the UN nuclear regulator.

He met with Prime Minister Anthony Albanese, Defence Minister Richard Marles and Foreign Minister Penny Wong, saying he was satisfied with Australia’s commitment to comply with its obligations towards nuclear non-proliferation.

Grossi has admitted the AUKUS submarines deal would be “very tricky” for nuclear inspectors, with vessels fuelled by highly enriched uranium at sea for months at a time. But he told the ABC last month he was confident a monitoring agreement could be reached.