Former Greek Finance Minister Yanis Varoufakis revealed he had dialed up his criticism toward the European Union because of claims the EU had helped foster discontent on the continent. Mr Varoufakis, who is running on a cross-national manifesto for a seat in the European Parliament, has long been a critic of the bloc and has repeatedly demanded Brussels adopt wide reform plans. Speaking to DW earlier this week, Mr Varoufakis said: “I spent years campaigning and demonstrating against Greek governments when Greek governments were wrong.

“Similarly, as a staunch Europeanist – a committed, dedicated, convinced Europeanist – I am protesting what the European Union institutions are doing because they are creating the discontent that is begetting political monsters like Salvini in Italy, like Alternative fur Deutschland in Germany, like Golden Dawn in Greece.”

Matteo Salvini, the leader of populist party Lega, has flirted with the idea of joining forces with eurosceptic leader Marine Le Pen of France and Hungarian Prime Minister Viktor Orban in hopes to form a transnational supergroup after the European Parliament election.

The upcoming European parliamentary election is being widely billed as a decisive contest between far-right populists tired of receiving orders from Brussels and progressives seeking deeper EU integration. 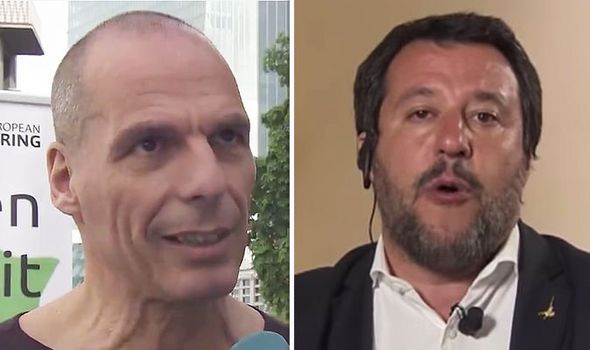 In an interview with US magazine The Atlantic, Mr Orban insisted Italian deputy Prime Minister Matteo Salvini is the true strongman of Europe and the one to watch after the EU vote.

Mr Orban said: “The champion of Europe is Matteo Salvini. He leads a large country. Europe can sanction a little country like Hungary. It wouldn’t dare go after a country like Italy, with 60 million people. Moreover, Italy has a powerful voice.

“It is standing firm against migrants – manning the front line.”

The bloc, according to Mr Salvini, would be the largest in the 751-member parliament.

Once shunned by the elite in Brussels, the likes of Mr Salvini, Mr Orban and Mrs Le Pen have been buoyed by an EU-wide surge in support for anti-immigration nationalists.

As a result, eurosceptic parties like the League, the RN and Mr Orban’s ruling Fidesz are expected to win around 35 percent of the vote in the EU elections, according to data analysed by the European Council on Foreign Relations.

Next week’s vote has been cast as a battle between progressive liberals who believe in a more ambitious, more integrated Europe and anti-immigration populists who resent Brussels and its fiscal and migration policies.

It remains unclear to whom Mr Orban will reach out after the EU vote. While he has cold-shouldered Mrs Le Pen, he has not ruled out buddying up with Mr Salvini. The Italian hardliner, however, has already formed an alliance with his French counterpart.