On Tuesday, the US will hold elections for Congress and one third of the Senate. The vote will determine whether Congress stays aligned with the White House, or moves into the hands of the Republican opposition.

While Republicans have nudged ahead against the Democrats in many polls in numerous races, the issues driving the elections are unpredictable. 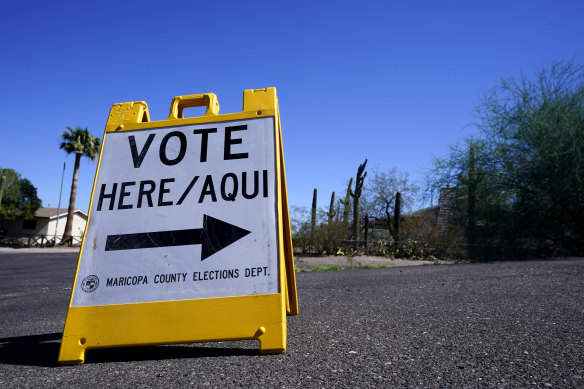 A sign marks the entrance to a voting precinct on the first day of early voting in the general election in Phoenix. Credit:AP

President Joe Biden’s push for economic reforms has only been made possible by the slim majority of Democrats in the House and the effective majority in the Senate. But that agenda has been upended by months of soaring inflation and economic worries. Crime has risen in the aftermath of the COVID lockdowns, while perceptions of a crime wave are possibly a more significant issue that the Democrats will have to contend with.

Meanwhile, the outrage triggered by the Republican majority Supreme Court’s repeal of the federal protection for access to abortion in June has triggered a wave of enthusiasm to vote for liberal candidates.

While Biden himself is not on the ballot, the vote is often seen as a referendum on the party in the White House.

Rather than offer predictions of the voting tallies, here is a look at some issues driving voters and likely to be evident in the outcome of the event to take place on Tuesday (Wednesday AEDT).

Immigration has become a long-standing issue for voters, particularly in states along the US-Mexican border, where communities have been transformed by new transplants from abroad.

The number of unauthorised immigrants in the US jumped from 1990 to 2007, adding to the perception among many voters that such immigration is uncontrolled. While the US has struggled to enact any comprehensive immigration reform, the issue remains a persistent area of concern.

As in Australia, and elsewhere, inflation driven by manufacturing and distribution bottlenecks following the COVID-19 lockdowns has escalated. Now Americans are enduring the worst inflation in 40 years, which has undercut the economic reform message Biden has sought to push for the Democratic Party.

One of the biggest drivers of inflation is something politicians have little control over. The war in Ukraine had driven up petrol prices, while the OPEC+ cartel has actually cut oil production, buoying prices at the bowser in the process.

What began decades ago as the creeping distrust between the parties, has accelerated into a discernable feature of US political society. Fuelled by social media, the rise of Donald Trump, and escalating culture war, this hyper-polarisation has shaped the views of voters ahead of the elections.

The attack on US Speaker Nancy Pelosi’s husband less than two weeks out from the midterms has heightened fears for a wave of political violence in its aftermath.

Since the US doesn’t have compulsory voting, elections aren’t just about who gets the most votes, but how many citizens register to participate and show up. With inflation spiralling, and the availability of affordable living withering, the economy has emerged as a major driver of voter behaviour. Other issues are by no means ignored. The Supreme Court’s June 24 decision to overturn Roe v Wade ruling on abortion jolted the registration of voters likely to pull the lever against Republicans. Democrats may see a boost from these voters.

The most recent US Bureau of Justice statistics suggest violent crime as a whole hasn’t increased from 2020 to 2021, but the murder rate has increased during the pandemic. Yet, as in so many political issues, perception is everything, and voters fear violent crime. Pew Research shows that 73 per cent of Republican and right-leaning registered voters say violent crime is important to their vote, while only 49 per cent of Democrat or left-leaning registered voters believe the same. The graph of mentions below corresponds to these left-right split views.

However, the midterm elections play out, there is no shortage of conflicting forces pushing on the American voters this year.