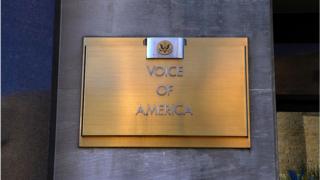 The new chief of the US federal media agency, a Trump-appointee, has sacked three senior officials, raising fears that networks will be politicised.

The firings have been criticised by liberals and some conservatives.

Mr Pack has defended his actions as transitional steps that any new leader of an organisation would take.

The USAGM is tasked with broadcasting independent news to a global audience of more than 280 million people. It was created in 1942 to combat Nazi propaganda.

The director of Voice of America, Amanda Bennett, and her deputy Sandy Sugawara resigned on Monday after Mr Pack was confirmed by the Senate.

The heads of Radio Free Europe, Asia, Middle East Broadcasting as well as the Open Technology Fund were ousted on Wednesday.

Mr Pack has not offered public details on why these individuals were fired.

President Donald Trump has recently criticised Voice of America, calling its reporting “disgusting” and accusing it of spreading “propaganda” in favour of China.

The leaders of the Radio Free Europe/Radio Liberty and Middle East Broadcasting networks – Jamie Fly and Alberto Fernandez – were both appointed during Mr Trump’s presidency.

A number of long-time advisory board members have also been removed, and Mr Pack is now the chairman of these outlets’ boards of directors.

Mr Pack has also appointed a number of former Trump administration officials – including from the Departments of Justice, Homeland Security and Office of Management and Budget – to high level positions in the agency, CNBC reported.

These new appointees also have ties to conservative organisations.

Democrats have been particularly concerned by Jonathan Alexandre’s addition to the board of Radio Free Asia, as he is a policy director for the Liberty Counsel, which has been designated as a hate group by the Southern Poverty Law Center for its opposition to LGBT rights.

The sackings followed an internal email to staff from Mr Pack, saying he would maintain “the agency’s independence”.

What’s the reaction been?

On Thursday, Mr Pack defended his decisions as “critical changes” that were “long overdue”.

“Every action I carried out was – and every action I will carry out will be – geared toward rebuilding the USAGM’s reputation, boosting morale, and improving content,” Mr Pack said.

“This plan is wholly pursuant to the bipartisan language that was developed and approved by Congress and the previous administration, both of which readily recognised that the agency had grown obsolete and ineffective implementing its statutory mission.”

“This attack is sadly the latest – but not the last – in the Trump administration’s efforts to transform US institutions rooted in the principles of democracy into tools for the president’s own personal agenda.”

Democrats Eliot Engel, chairman of the House of Representatives Foreign Affairs Committee, and Nita Lowey, chairwoman of the House Appropriation Committee, said on Thursday they were “outraged” by Mr Pack’s actions that prioritised “political whims”.