Beijing showcased its new mobile launch technology on Wednesday. According to state media, The Long March 11 rocket was launched from a platform on a large semi-submersible barge in the Yellow Sea at around 12pm local time (4am BST). The small rocket is designed to be deployed speedily from mobile launch sites such as ships.

The rocket carried seven satellites on board, including one that can measure sea-surface winds in order to give accurate typhoon forecasts. 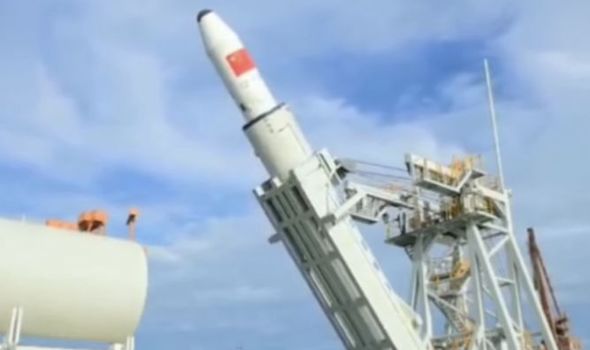 The China National Space Administration said in a statement: “Launching a rocket from the sea has the advantages of high flexibility, good adaptability for specific tasks, and excellent launch economy.”

Continuing, the administration said the Long March 11 rocket could assist in the development of belt and Road, the country’s plan to grow its global trade network.

The statement read: “It can flexibly select the launch point and touchdown area to meet the needs of various payloads for different orbits, and provide better aerospace commercial launch services for countries along the belt and road”

It is the latest move in China’s space programme as it rushes to catch up with the US and become a major space power by 2030 – but the country insists its space ambitions are purely peaceful.

But the US Department of Defence has accused China of pursuing activities aimed at preventing other nations from using space-based assets during a crisis.

The news comes as Beijing announced plans to begin construction of its very own manned space station in 2020.