Brussels: The European Union ratcheted up pressure on Belarus by agreeing Monday to slap sanctions on airlines accused of helping Belarus President Alexander Lukashenko wage a “hybrid attack” against the bloc using migrants, as tensions mounted on the Polish and Lithuanian borders.

Up to 4000 migrants are stuck in makeshift camps in freezing weather in Belarus while Poland has reinforced its border with 15,000 soldiers, in addition to border guards and police. At least 11 migrants have died in recent weeks. 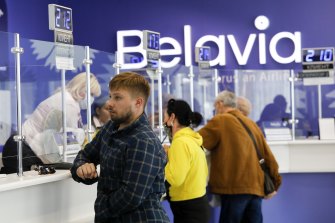 Polish authorities said Monday that Belarusian services had led a large group of migrants to a border crossing with Poland and made them believe they would be transported by bus to Germany. Polish police broadcast messages across the border telling the migrants that “they have been deceived”.

“The Belarusian side is deliberately escalating the situation,” Marcin Przydacz, a deputy foreign minister, said during a discussion organised by the German Marshall Fund of the US.

“The situation is unprecedented and unpredictable,” Przydacz said.

Belarus’ borders with Poland, Lithuania and Latvia are also the eastern borders of both the EU and NATO. The EU says Lukashenko’s authoritarian regime has for months invited migrants to Minsk, many of them Iraqis and Syrians, with the promise of helping them across the border. 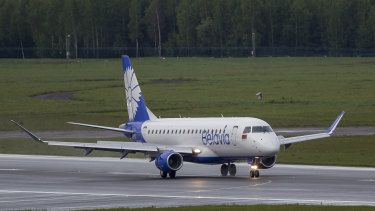 A Belavia plane lands at the International Airport outside Vilnius, Lithuania. Credit:AP

Meanwhile, Lithuanian officials said they were seeing a rising number of attempts by migrants to cross its border from Belarus.

“They try entering from many other places which previously were not used,” Lithuanian Interior Minister Agne Bilotaite told reporters.

The 27-country EU has already imposed four sets of sanctions on Belarus authorities and senior officials over the disputed election last year that returned Lukashenko to office and his government’s brutal crackdown on peaceful protesters that followed. Opposition leaders and Western nations have described the vote as a sham.

The EU is preparing a fifth lot of sanctions on Belarus. On Monday the bloc’s foreign ministers extended the scope of those measures to add airlines, travel agents and others accused of helping to bring migrants to Minsk, the Belarusian capital.

“Today’s decision reflects the determination by the European Union to stand up to the instrumentalisation of migrants for political purposes. We are pushing back on this inhuman and illegal practice,” EU foreign policy chief Josep Borrell said.

EU headquarters said the bloc will now be able to target individuals and entities organising or contributing to activities by the Lukashenko regime that “facilitate illegal crossing” of the EU’s external borders. A list of those to be hit by the asset freezes and travel bans is expected to be finalised shortly.

The EU believes Lukashenko began luring migrants to Belarus as a retaliatory to destabilise the bloc, which has been deeply divided over how to manage migration since well over 1 million people entered the bloc in 2015. 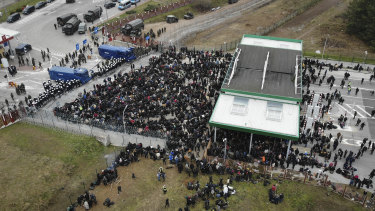 Migrants from the Middle East and elsewhere gather at the checkpoint “Kuznitsa” at the Belarus-Poland border near Grodno, Belarus.Credit:AP

Germany allowed in hundreds of thousands of people that year, but doesn’t want to encourage more now.

German Foreign Minister Heiko Maas was asked in Brussels if he would support Germany taking in people now on the Belarusian side of the border if the flow of migrants to Belarus is stopped.

He replied: “No. I would argue for the people who are there, who were brought there under false pretences by the Lukashenko regime, being taken back to their countries of origin, and for the countries of origin to take their share of the responsibility.”

German federal police said Monday that they registered 1708 unauthorised entries to the country “with a connection to Belarus” in the first 14 days of November, bringing the total this year so far to 9549.

Also Monday, the United Arab Emirates banned travellers from several Middle Eastern countries from boarding flights to Belarus, cutting off one of the last major air routes for would-be migrants. Most airlines with flights to Minsk now say that won’t allow Iraqis, Syrians or Afghans to travel there, so the impact of the EU sanctions on carriers could be very limited.

Lukashenko, meanwhile, brushed aside the threat of fresh sanctions.

“We will defend ourselves. That’s it, there’s nowhere to retreat further,” he was quoted as saying by the state news agency Belta.

Lukashenko once again denied that his government organised the migrant influx, saying that “it isn’t worth the effort,” and he insisted the migrants are resisting Belarusian efforts to encourage them to return home.

“These people, I must say, are very stubborn. No one wants to return. And understandably so — they have nowhere to come back to. They have no place to live there, they know there’s nothing to feed their children with. Moreover, some are simply afraid for their lives,” he said.

Maas, the German foreign minister, said the EU was “far from the end of the spiral of sanctions”.

Belarus flag carrier Belavia is among the airlines likely to be hit, and Maas warned other companies to follow the example of Turkish Airlines by restricting flights to the Belarus capital.

“The situation is so dramatic that I can no longer rule out the denial of overflight rights or landing permission in the European area,” he said.

Lithuanian Foreign Minister Gabrielius Landsbergis said the EU must ensure that planes likely to be bringing in migrants bound for Europe “wouldn’t land in Minsk, or actually any Belarusian airport”.