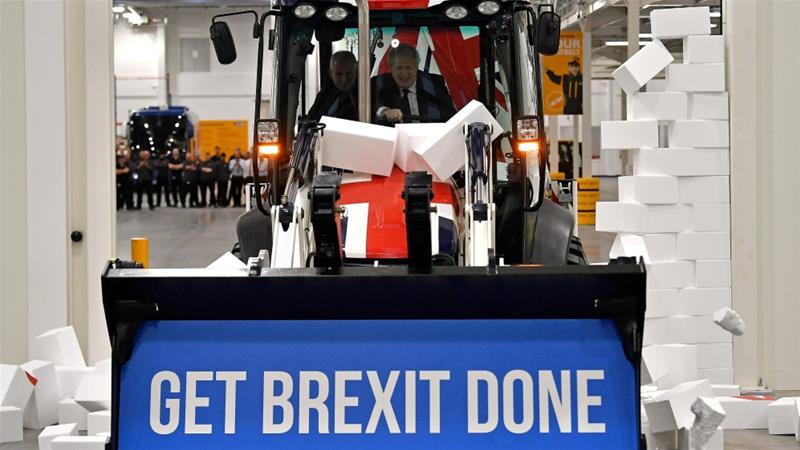 London, United Kingdom – The United Kingdom is on course to leave the European Union within weeks, with newly re-elected British Prime Minister Boris Johnson preparing to deliver on his central campaign promise to “get Brexit done”.

However, with the transition period now looming and Johnson coy on his vision for future UK-EU relations, analysts said the years-long political crisis is far from over and warned there could be more drama ahead.

Johnson’s Conservative Party swept to a landslide victory in Thursday’s snap general election, handing him the parliamentary majority he needs to action Brexit by the end of next month and kickstart talks over post-divorce relations – including on trade, security and law enforcement, among other issues.

Anand Menon, director of The UK in a Changing Europe think tank, said in the post-election short term, the Conservatives were likely to focus on how they have managed to break the Brexit deadlock, rather than acknowledge the challenges ahead.

“A lot of government is going to get bogged down in Brexit … but the political question is whether that takes place on the front page of the newspapers or on page 10,” he told Al Jazeera.

“If you were the government now, you would make Brexit as boring as humanly possible so that people aren’t talking about it and the newspapers struggle to write about it.

“You would also come up with some very flashy domestic policy objectives in February and create a narrative around the fact that Brexit was done, but I don’t know whether that will work or not.”

‘Destination unclear as ever’

The prime minister has made clear that Brexit must mean the UK leaving the EU’s customs union and single market, as well as ending the overall jurisdiction of the European Court of Justice, but has offered few other concrete details on possible future relations.

On Friday, Johnson promised to put an end to the “nonsense” arguments surrounding the UK’s exit from the EU, saying his government would “get Brexit done on time by the 31st of January, no ifs, no buts, no maybes”, in a victory speech.

Menon said: “We are leaving the EU on January 31, but the ultimate destination remains as unclear as ever.

“We have simply no idea what the prime minister is going to do with his majority; there are some who are saying he will be free to do the hard Brexit he has always wanted to do, and others claiming he will now be free to turn into the one nation Tory he always was, do a soft Brexit and extend the transition period.

“The most remarkable thing about this election is on the one issue that was supposed to dominate it, we do not know what the prime minister wants … There is loads of uncertainty ahead.”

Johnson has said the transition period would not be extended past the end of 2020, when it is currently scheduled to conclude, but there is doubt over whether a comprehensive agreement on post-Brexit relations could be finalised by then.

The transition period can be prolonged by up to two years if both the UK and EU agree to do so, but that  decision must be taken by July 1, 2020.

Michael Barnier, the EU’s chief Brexit negotiator, has branded the British leader’s plan to agree, and sign off on, a new plan for relations inside 11 months as “unrealistic”.

“We will do all we can to get what I call the ‘vital minimum’ to establish a relationship with the UK if that is the time scale,” Barnier told a group of senior Members of the European Parliament  in Brussels earlier this week, according to a leaked recording of the closed-door meeting, obtained by the UK’s Independent newspaper.

Negotiations of this scale often take several years of wrangling as a result of the technical challenges and political issues that emerge. The EU’s trade deal with Canada, for example, took seven years to complete.

Any trade agreement brokered would also need to be ratified before coming into force – a process that could span several months.

The ratification process requires all parliaments of EU member states to vote on the framework of the UK’s future relationship with the bloc. Each member state also possesses a veto.

The UK’s own officials have raised questions about Johnson’s proposed timeline.

A leaked document from the Department for Exiting the EU, reported on this week by the Financial Times, suggested the government may not be able to deliver on the Northern Ireland protocol in Johnson’s withdrawal agreement by the end of 2020.

“It is difficult to say whether we definitely will end up with a future relationship all sorted by 2020,” said Maddy Thimont Jack, a specialist Brexit researcher at the UK’s Institute for Government, citing the issues concerning Northern Ireland as a “big” unresolved question.

“It will depend on what the government ends up saying it wants to get from the EU and then whether that is possible in that timeframe,” she added.

“There will be a choice I think, about whether or not they want to go for something more ambitious and take longer to do it, or whether they think the most important thing is leaving the transition period by December 2020.”

In the event the UK and EU fail to broker a trade agreement by the end of the transition period, and there is no extension, the trade relationship between the pair would by default revert to World Trade Organization (WTO) terms. The same rules would come into effect if the UK left the EU before the transition period starts without a withdrawal agreement, a scenario commonly known as a no-deal Brexit.

But while Johnson may be constrained somewhat in shifting the EU’s red lines over future relations, his resounding majority will likely afford him a degree of freedom and flexibility from the UK side during negotiations, with fewer battles expected in Parliament over Brexit.

This year, MPs have been mired in rolling crises over how to execute the result of the UK’s 2016 referendum on membership of the bloc, with the deadlock forcing Johnson’s predecessor, Theresa May, from office.

“The action will definitely move away from Westminster, so it will likely be a very different year to the year we just had,” said Thimont Jack.

“If you have a majority government then Parliament just doesn’t have the same say, so even if there is a vote at the end of the process, its harder for MPs to say ‘no, we won’t accept this’,” she added.