The man was among three people pulled from the water after a massive wave swept them off the pier in Ramsgate, Kent, this morning. 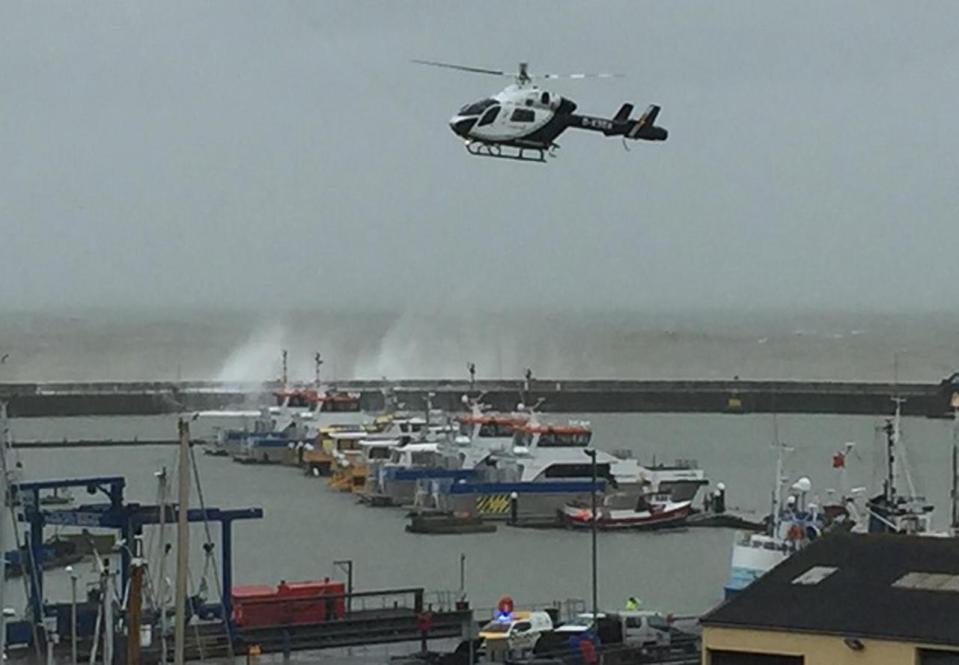 All three were rescued by the coastguard but sadly one didn't make it, with the other two currently in hospital.

A Kent Police spokesman said: "Officers are attended to assist the coastguard and the lifeboat teams.

"Three men were recovered from the water, but one was later pronounced dead at the scene. The other two were taken to hospital for treatment.

"The death is not being treated as suspicious.

"Enquiries are ongoing to identify next of kin." 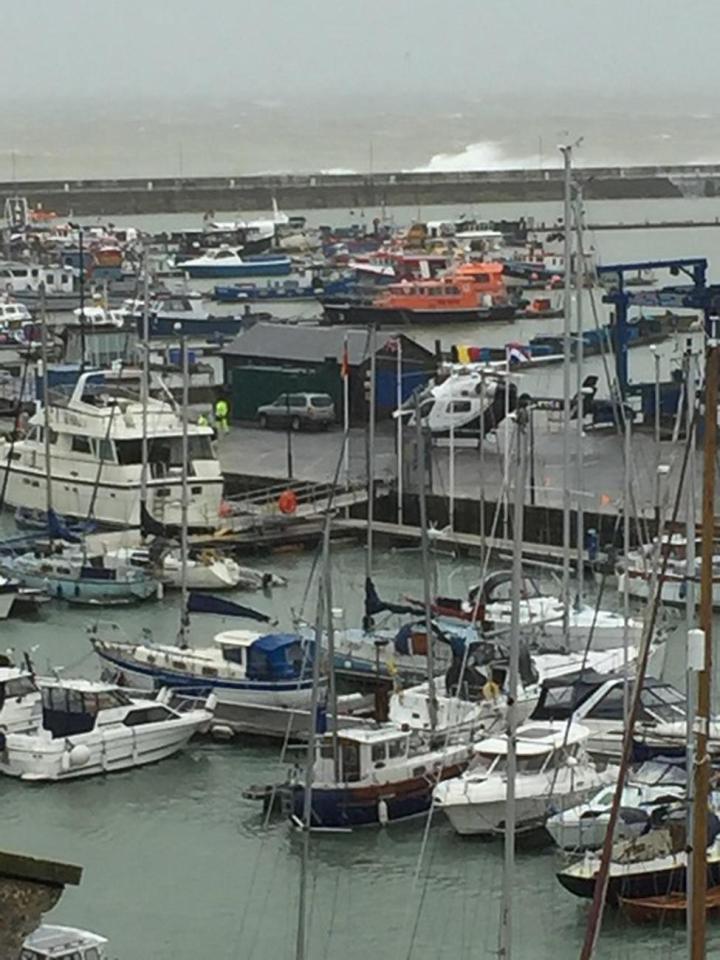 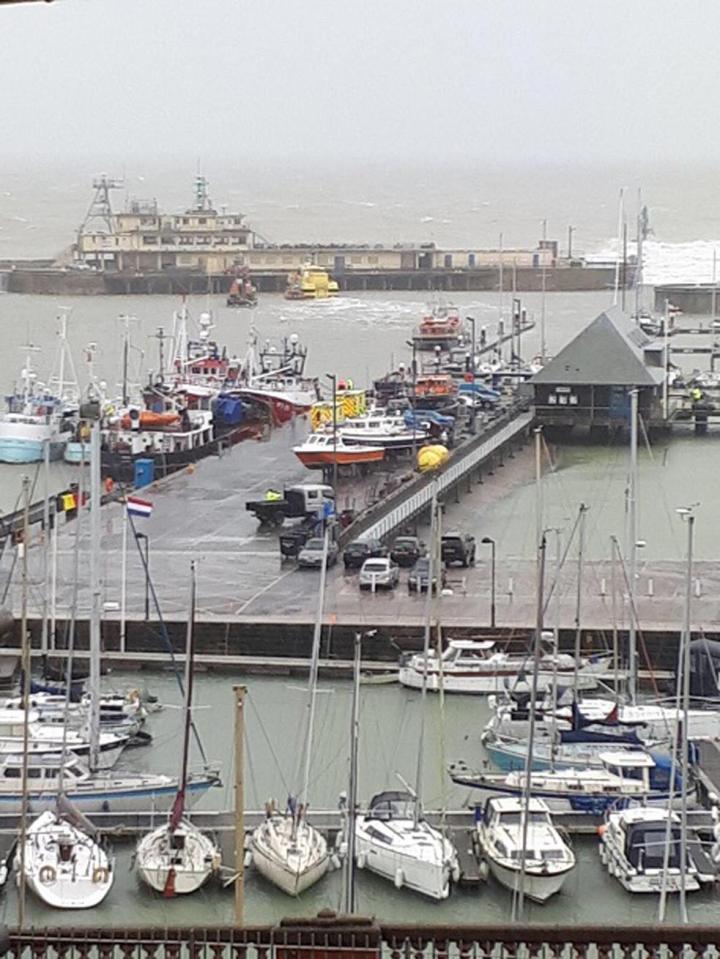 A Maritime & Coastguard Agency spokesperson said they had been called to Ramsgate, adding: "Just before 10.30am today HM Coastguard received a report that three people were in distress in the water off Ramsgate pier.

"It is believed that all three people were washed off the pier by a large wave.

"Margate Coastguard Rescue Team and the Ramsgate RNLI Lifeboats are on scene, alongside South East Ambulance Service and Kent Police."

The tragedy comes as weather warnings remain in place for much of South East England, with wind gusts expected to hit 60mph. 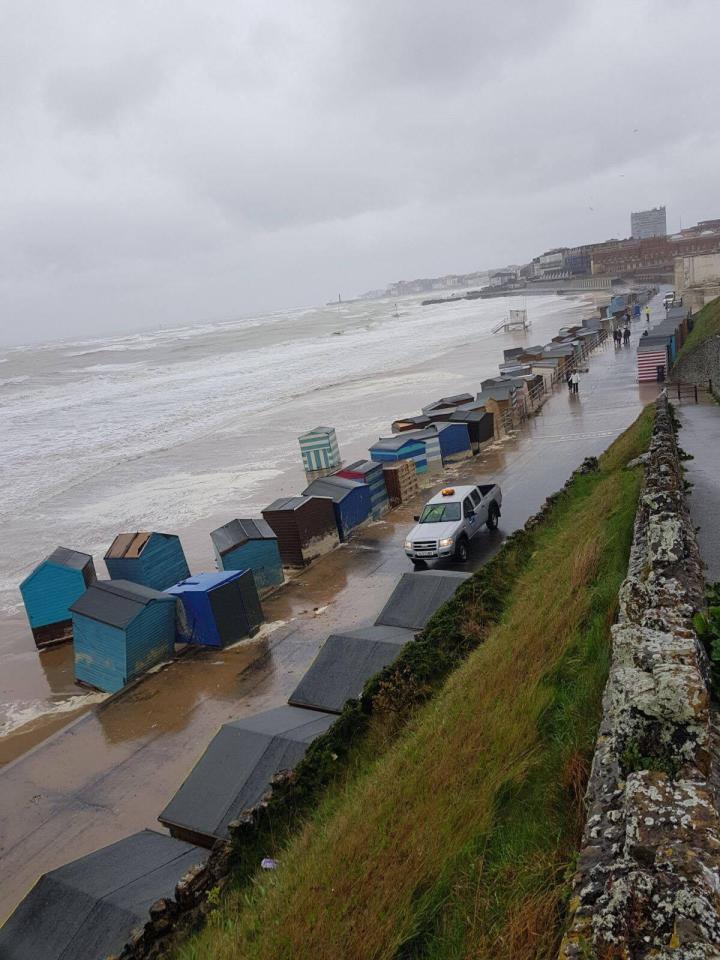 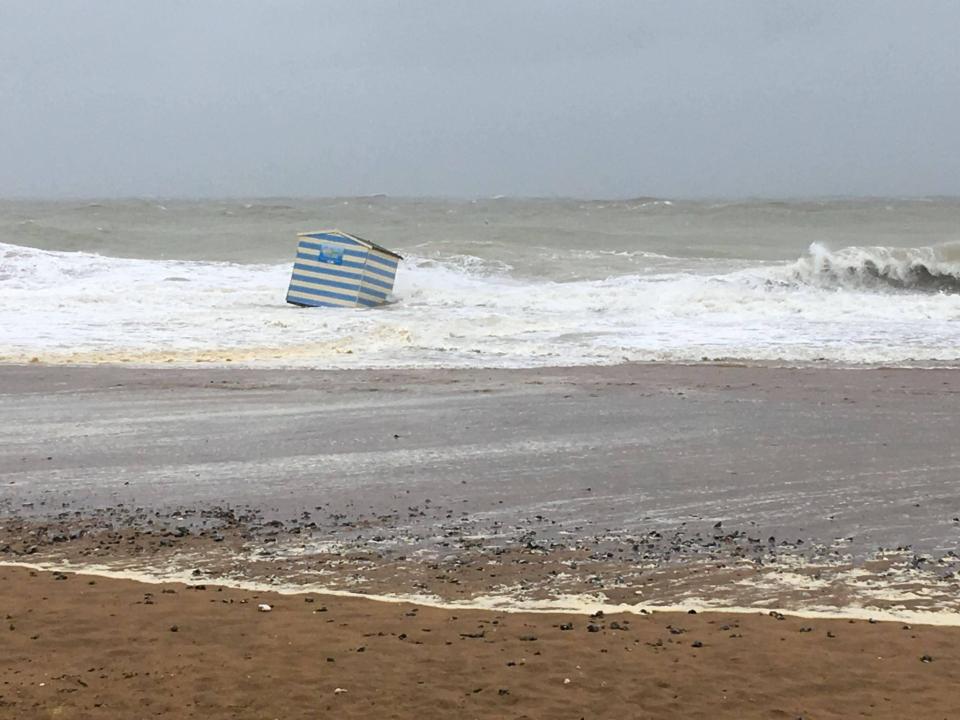 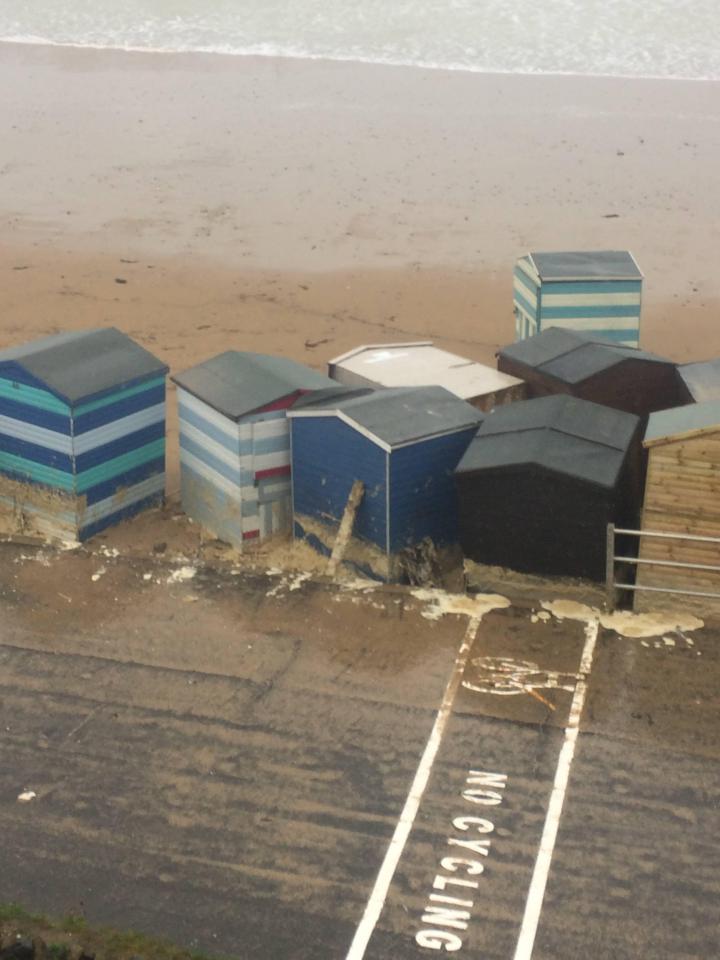 Elsewhere in the country, the Thames burst its banks in West London as it struggled to cope with the deluge of rain today.

Dramatic pictures show cars submerged in river water after a month's worth of rain dumped on Brits.

In Thanet, luxury beach huts were left in ruin by the strong winds with some ripped out to sea as monster winds gripped the Kent seaside town.

Some in Ramsgate, Broadstairs and Minnis Bay were battered by huge waves lashing at them causing damage.

This morning, a main road was blocked after a tree blew down, smashing onto a car near Canterbury, Kent.

Met Office meteorologist Sophie Yeomans said areas across Britain had already seen 50mm of rain in the past 24 hours. 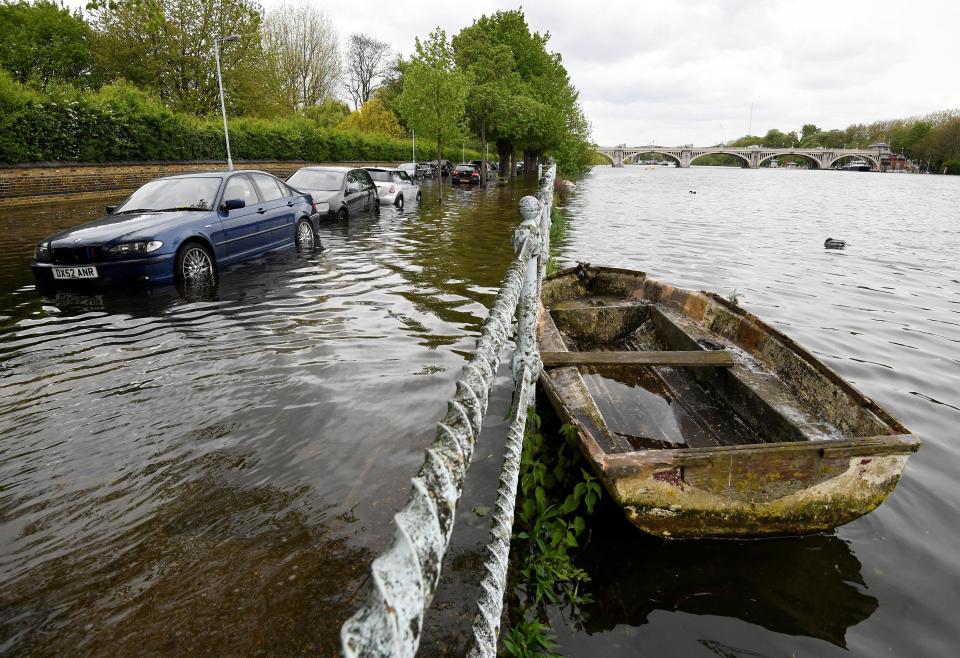 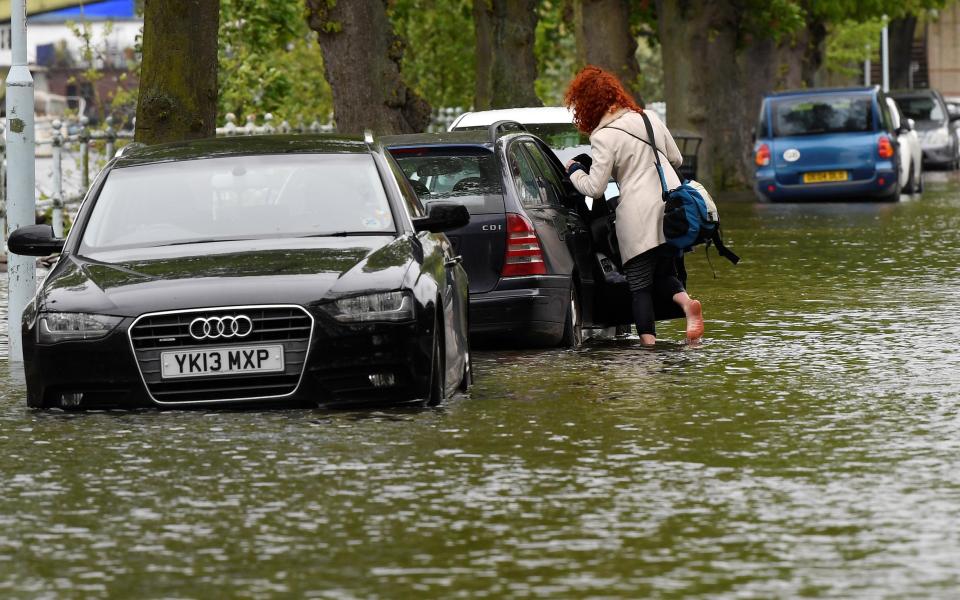 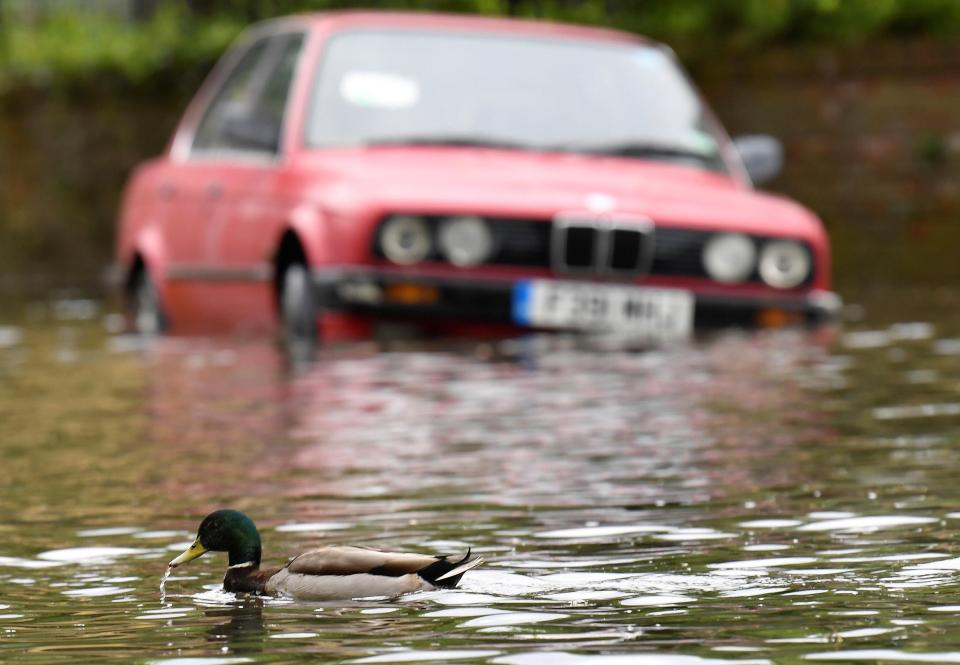 And wind gusts of up to 54mph had already been recorded. Ms Yeomans said: "The wind gusts seem to be the highest mainly around the east coast of Kent, so I would imagine there are some large waves."

A yellow weather warning is also in place for a number of areas around Britain, with homes and businesses on high alert for flooding and torrential rain.

More than 30 flood warnings are today in place.

Temperatures also remained low – with the mercury just reaching 4C in most of the UK.

Clare Dinnis, flood duty manager for the Environment Agency, said: "Widespread heavy rain from Sunday evening and through Monday could lead to flooding from surface water and rivers in parts of south, south-east and central England.

"Strong winds will also lead to large waves and spray in exposed coastal areas and we encourage people to take care in these locations.

"We expect some travel disruption during Monday morning's rush-hour. We advise people to listen to their local radio stations and remember not to drive through flood water as just 30cm of fast flowing water is enough to move your car."

Today's wet weather has come from a slow-moving low pressure band pushing up from the continent.

But the week will slowly dry out, with temperatures expected to squeeze into the low 20s over the Bank Holiday.