The UK is bracing for a blistering heatwave to scorch the country and a shocking weather chart has shown hot temperatures sweeping towards Britain. According to the weather map, hot air moves towards the UK on Wednesday and into Thursday before gripping much of England, Scotland and Wales by Saturday. Forecasters have warned temperatures could reach 31C in the UK on Saturday, with much of Europe issuing severe warnings because of the heat.

BBC meteorologist Sarah Keith-Lucas said: “Later this week, as that high pressure has more of an influence, low pressure clears out towards the west.

“We will start to see things becoming a little bit warmer once again.

“We could see temperatures as high as 31C – the warmest of the weather probably towards western England and towards Wales as well.

“Later in the week, it stays dry, sunny and still very hot and humid. But do watch out for some fairly uncomfortable nights.” 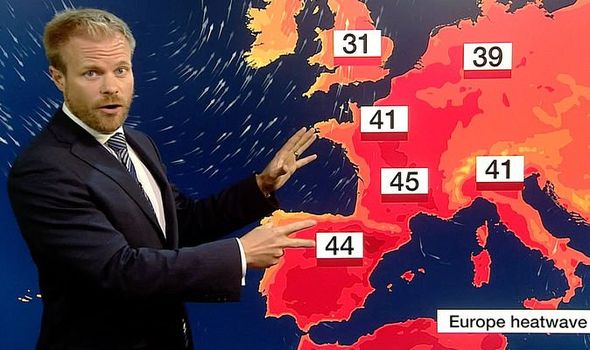 There is a widespread heatwave going on across Europe

The Met Office has also warned of scorching temperatures sweeping across the country towards the end of this week.

Met Office Chief Meteorologist Dan Suri said: “It’s going to get hot and humid for some from Wednesday, with the highest temperatures expected across southern and western parts of the UK.

“Not everywhere will see the high temperatures, however, as an easterly breeze will keep North Sea coasts much cooler.

“By the time we get to Saturday, however, North Sea coasts will join much of the rest of eastern UK in seeing temperatures of 27 to 32 Celsius.” 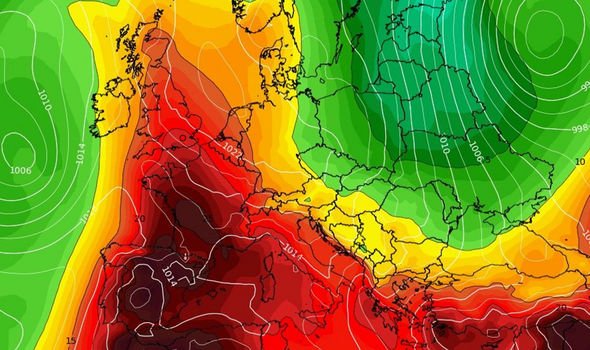 Across Europe, the heat will rise even higher as meteorologists have warned temperatures can reach or even exceed 40C from Spain to Switzerland.

France has even issued weather warnings with temperatures threatening to reach near 45C in the south of the country this week.

BBC Weather forecaster Simon King said: “There is a widespread heatwave going on across Europe. Temperatures up to 45C in southern France by Friday.

“That could be record-breaking, the all-time record there is 44C.”

Leading bookmakers have slashed odds on this summer being the hottest on record to 4-6 as the heatwave nears the UK.

Coral’s John Hill said: “Temperatures are set to rise fast this week and that has resulted in the odds on the hottest summer on record melting quicker than an ice cream.

“The scorching temperatures are likely to continue into July, therefore, we have also slashed the odds on next month being a record breaker too.”