BBC Weather: Temperatures set to rise in parts of the UK

July is forecast to start with mixed conditions of both spells of rain, wind and sunshine. But the hot weather is expected to return and stick around later in the month. The latest heat maps from Netweather show dark shades of red sweeping the nation on July 15, with London expected to scorch in 28C (82.4F) heats.

Elsewhere in the south, highs of 27C could hit Kent and Southampton, while Bristol sees 25C.

Further north in Leeds, York and Manchester, the maps show 24C, and Liverpool could be hotter still at 27C.

Netweather’s long-range forecast between Monday, July 19, and Tuesday, July 27, predicted hot temperatures to arrive from European countries such as Spain and Portugal.

The forecast said: “The signal for high pressure reduces during this period, suggesting that the weather may turn more unsettled again from the west, especially towards the end of the period. 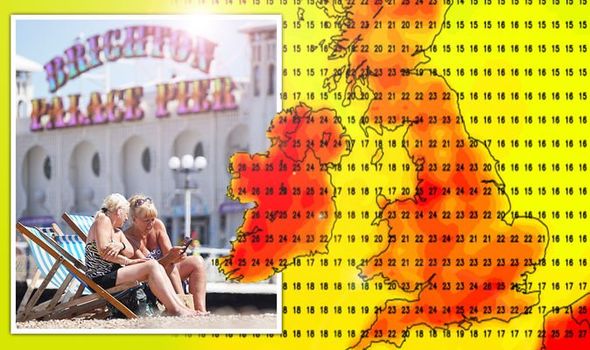 “There is potential for some notable heat during this week, as temperatures have been building over North Africa and Spain and Portugal, and as the fine weather breaks down we may tap into some of this hot air, though confidence at this range is relatively low.

“There is thus quite high confidence in above-average temperatures during this week, most likely by around 2C.

“Confidence in sunshine and rainfall amounts is somewhat lower, but it is most likely to be drier than average in the north and east of Scotland, with above-average rainfall most likely to affect the south of England.”

The BBC’s monthly forecast added hotter air could arrive towards the end of the month. 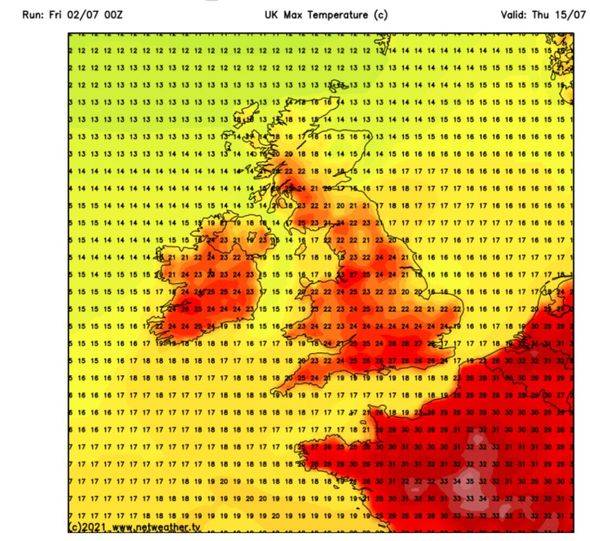 The forecast between Monday, July 12, and Sunday, July 25, said: “Later in July there are some encouraging signals that we may be in for a bit of sunshine and heat to break up the cooler, wetter weather, but confidence is low on the timing.

“There have been some very strong large-scale patterns in the North Pacific and North Atlantic sea surface temperatures that have been influencing the northern hemisphere weather more than they normally do in the summertime.

“This is contributing to the recent extreme heatwave in the Pacific Northwest and is helping to lock in our low-pressure systems so that they do not move eastward like normal.

“However, some extratropical rainfall around Indonesia and the western Pacific later in July may cause some disruption. This sort of activity favours more high pressure in eastern and north-east Europe. 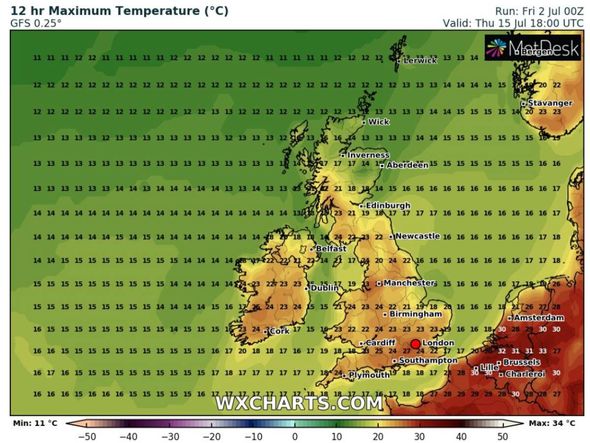 “So, in late July or early August, we may well see some drier and hotter weather develop, but only if this tropical rainfall signal can overpower the strong signals from the Pacific and Atlantic.

“This did happen in early June which gave us a week or warm, sunny weather, so we may be in store for more of that later in the month.

“Timing this out to a specific date at this range is beyond our prognostic abilities at the moment, but there are encouraging signals for the tropical rainfall to develop by mid-July.”

Similarly, the Met Office also predicted “hot spells” arriving during the second half of July. 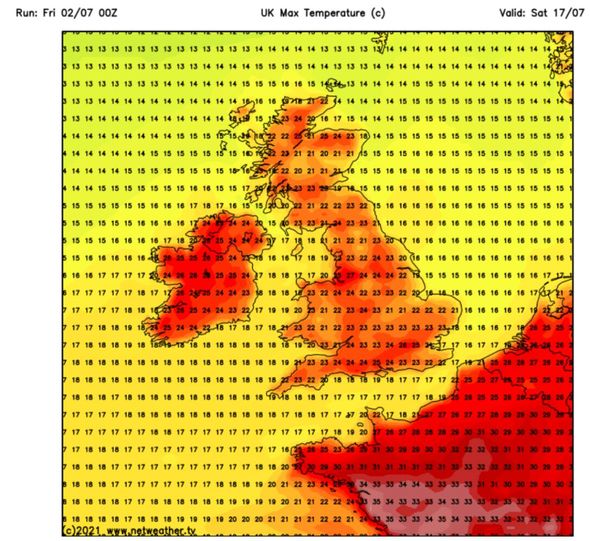 The long-range forecast between Friday, July 16, and Friday, July 30, said: “As is typical for the time of year, confidence is relatively low for this period, but fine and dry weather for much of the UK is most likely for the rest of July.

“There is however the possibility that occasional spells of rain may impact north-western areas, with a very low risk of thundery conditions developing at times across the south.

“Temperatures are likely to be above average for much of this period, with an increased risk of some very warm or hot spells occurring.”

But before the hot weather arrives, Britain is bracing for unsettled weather over the next week. 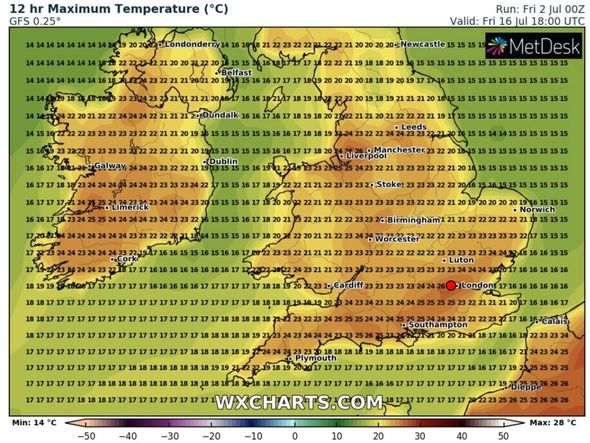 Brian Gaze, a forecaster at Weather Outlook, heavy spells of rain and wind could interrupt sunny skies next week.

But he added conditions should start to improve as July progresses.

He said: “Tomorrow morning heavy showers in central areas clear away northeastwards. Sunny spells develop, but there will be more thundery showers through the day. Feeling warm in the sun.

“Sunday is looking mixed. All regions have showers which could be heavy and thundery again. The highest temperatures are likely to be in central and eastern England where 23C (73F) may be reached. 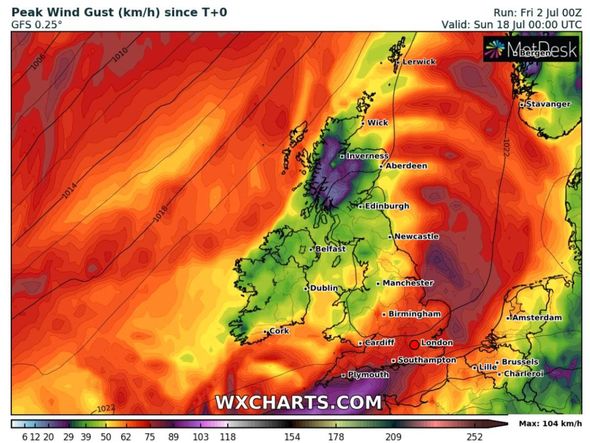 “During Monday showers probably become restricted to the northern half of the UK. The south has dry conditions to begin with, but through the afternoon heavy spells of rain push up from the southwest. Winds also strengthen.

“Outbreaks of rain clear northeastwards to be followed by a mix of sunshine and showers on Tuesday.

“There is the possibility of it being unseasonably windy in the southern half of the UK. Wind gusts of around 50mph are being suggested by some computer models.

“The mostly unsettled weather continues through the middle of the week. Thereafter, it could begin to dry out from the west.”