Government ‘GASLIGHTS’ the nation on fuel: Minister admits more than a quarter of forecourts HAVE run dry despite Boris insisting the situation is stabilising – as Army tankers hit the roads and drivers are STILL forced to hunt for fuel

The Government was today accused of ‘gaslighting’ Britain over the fuel crisis, as the Government admitted more than a quarter of petrol stations still remain without supplies – although this has halved since the weekend.

Roads across the UK, especially in London, Birmingham and Manchester, were gridlocked for the seventh day in a row today as motorists hunt for stations with fuel, carrying petrol cans, plastic jugs and water bottles to stock up.

Drivers told of their hunt for fuel overnight into this morning, with Portsmouth-based Joe Wells tweeting: ‘Being told there is petrol when I’ve been to five petrol stations and they’ve had none is literally gaslighting’.

And Kim Sunley from London tweeted: ‘Absolute bulls*** to say fuel crisis is over if my bus journey in NE London is anything to go by. One station closed, two gridlocked with queues. Government gaslighting.’

Government ministers began briefing on Monday that they believed the crisis would begin easing from today as drivers who needed petrol or diesel would then have been able to fill up.

Prime Minister Boris Johnson then gave a statement insisting the crisis was ‘stabilising’ and told drivers to ‘go about their business in the normal way and fill up in the normal way, when you really need it’.

Then on Sky News this morning, Treasury minister Simon Clarke said 60 per cent of petrol stations were out of fuel over the weekend, but that had dropped to 27 per cent yesterday and was still ‘falling’ today.

Panic buying was sparked last week by concerns a lack of lorry drivers would prevent supplies reaching fuel pumps, and has brought long queues around the UK and pockets of aggression at petrol station forecourts.

Petrol stations face disruption for up to a month even if panic buying stops, industry figures say – and one motorist picked up on Mr Johnson’s claims that the crisis was ‘stabilising’, tweeting: ‘It’s stabilising. Into a lack of fuel’.

But Mr Clarke insisted today that the ‘numbers are really moving in the right direction’ and 150 drivers from the Army were on standby to help if needed. Today, an Army tanker was seen been driven along the M5 near Bristol.

It came as the Government advised local councils around the country not to use the phrases ‘panic’, ‘panic buying’ or ‘stock-piling’ in reference to the fuel crisis, in the hope it will reduce queues outside petrol stations.

The advice was in a presentation from the Cabinet Office’s Behavioural Science Team – known the ‘Nudge Unit’ – whose members believe they can use psychology to influence the public’s behaviour.

Drivers also claim that away from the queues, roads in central London are quieter because fewer cars are out because of a lack of fuel, meaning thousands of people are either unable to get to work or working from home.

Meanwhile the RAC has warned motorists that fuel prices could reach record levels even if the current crisis ends, reaching 143p per litre for petrol and 145p per litre for diesel in the next few weeks – up around 10p. 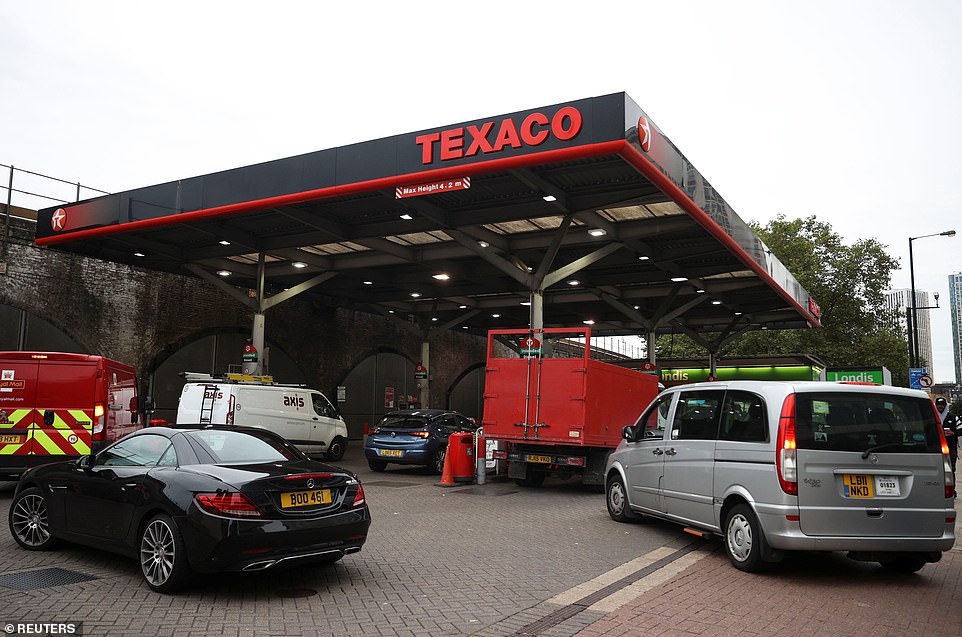 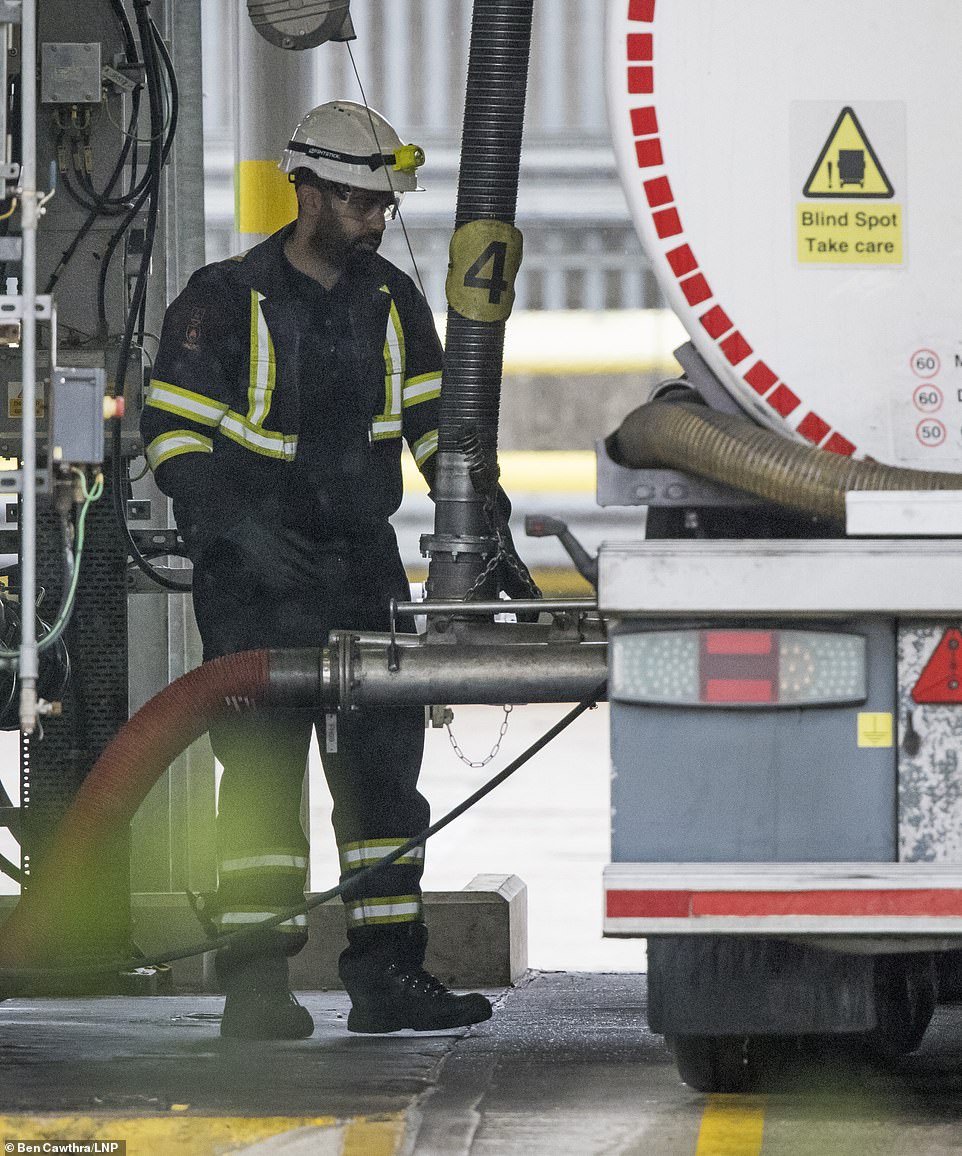 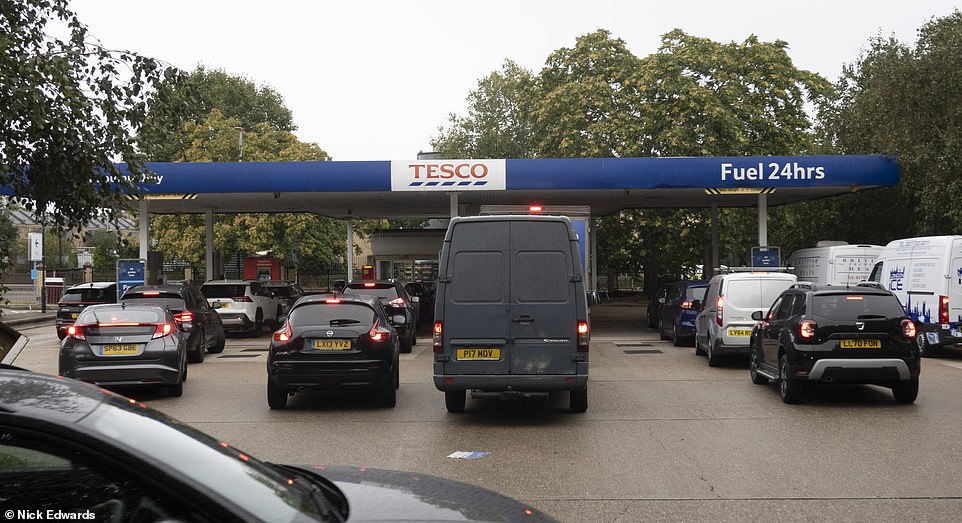 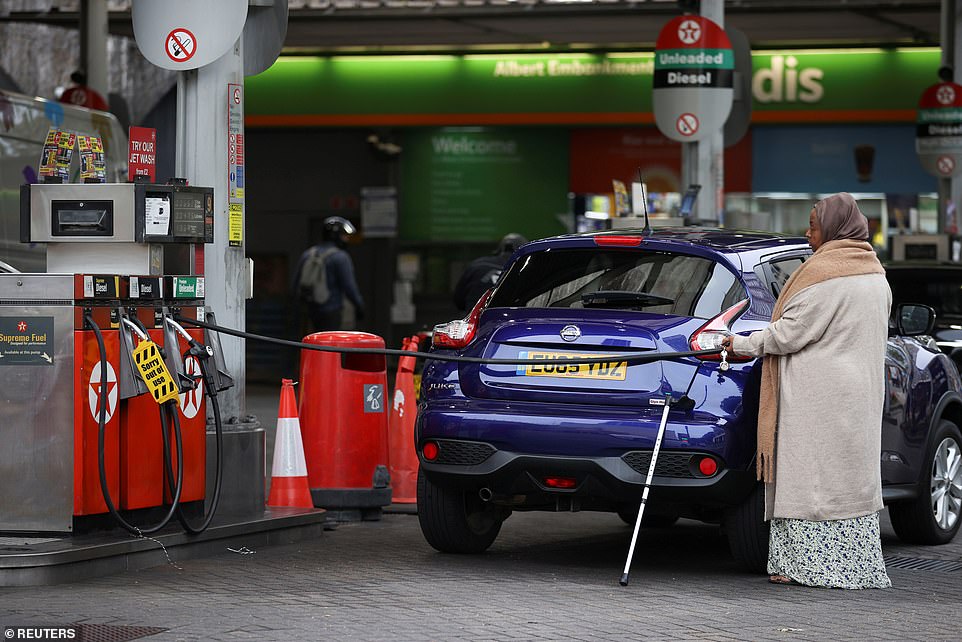 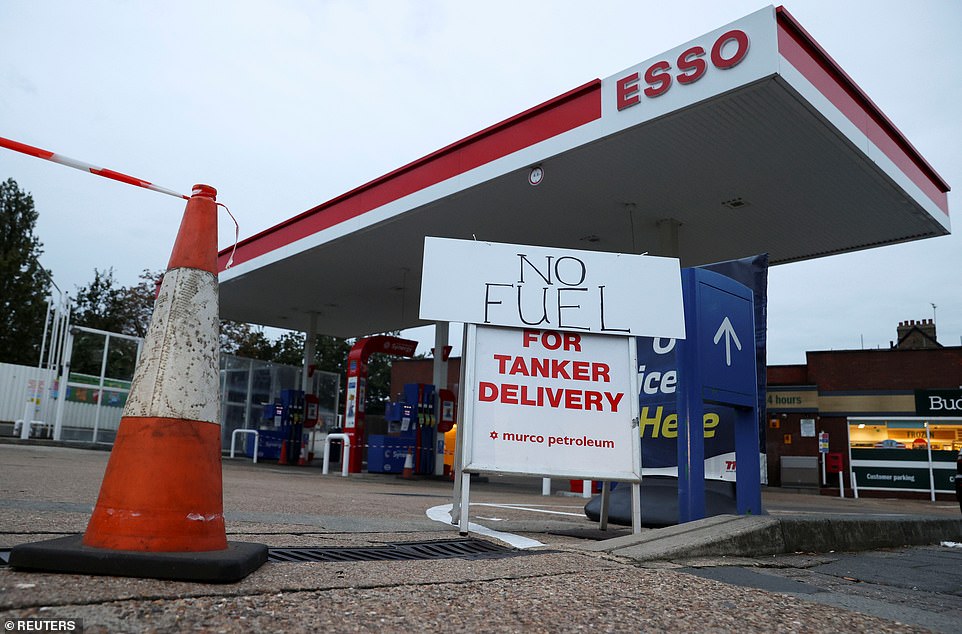 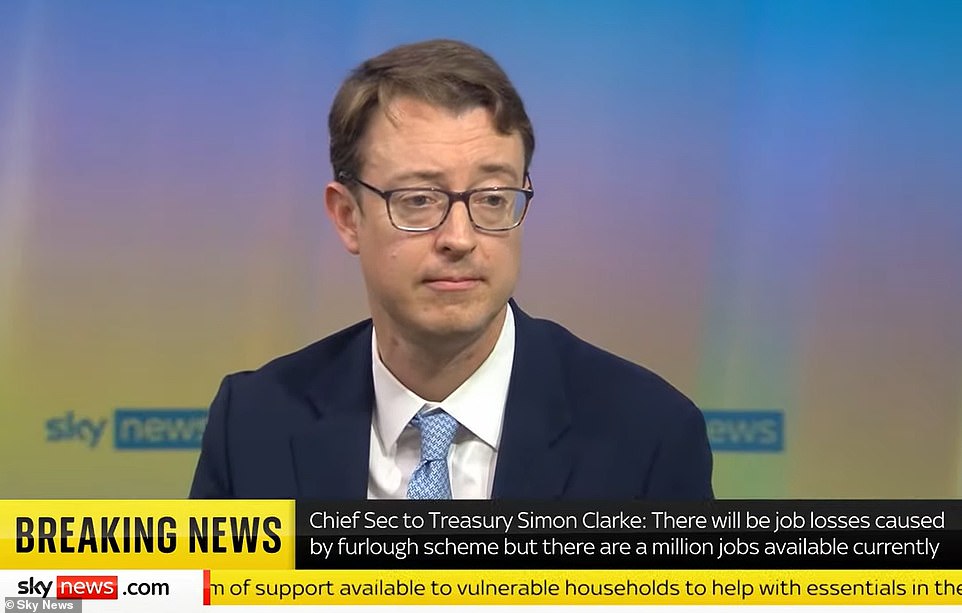 Treasury minister Simon Clarke told Sky News today that 60 per cent of petrol stations were out of fuel over the weekend, but that had dropped to 27 per cent yesterday and is ‘falling’

He told Sky News: ‘We’re in a situation now where the fuel crisis thankfully is easing. I think one of the key messages I want to get across this morning is that if people just return to normal buying habits.

‘We are in a situation now where more fuel is being delivered to petrol stations than is being sold, so that crisis is now absolutely back under control and is something that will continue to ease if people just return to normal buying habits.’

He added: ‘I think we are now in a situation where the data is becoming much clearer on this. Whereas at the weekend 60 per cent of petrol stations were out of fuel – that was down to 27 per cent as of yesterday. The numbers are really moving in the right direction.

‘They [the drivers on standby] are ready to help if they are needed. We are confident, on the basis that we’re getting… whereas at the weekend it was 60 per cent of stations that didn’t have fuel, that’s now done to 27 per cent and falling. 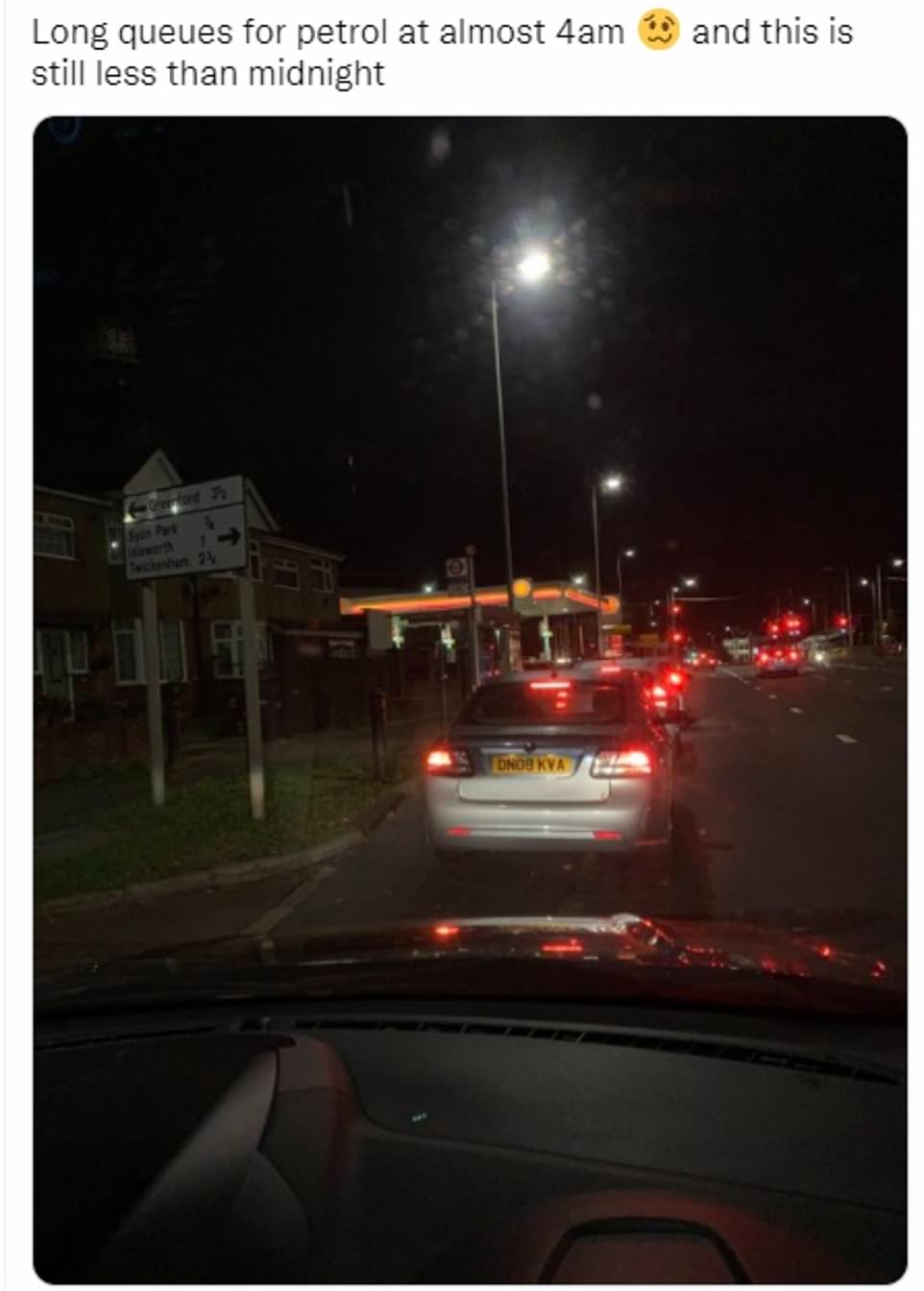 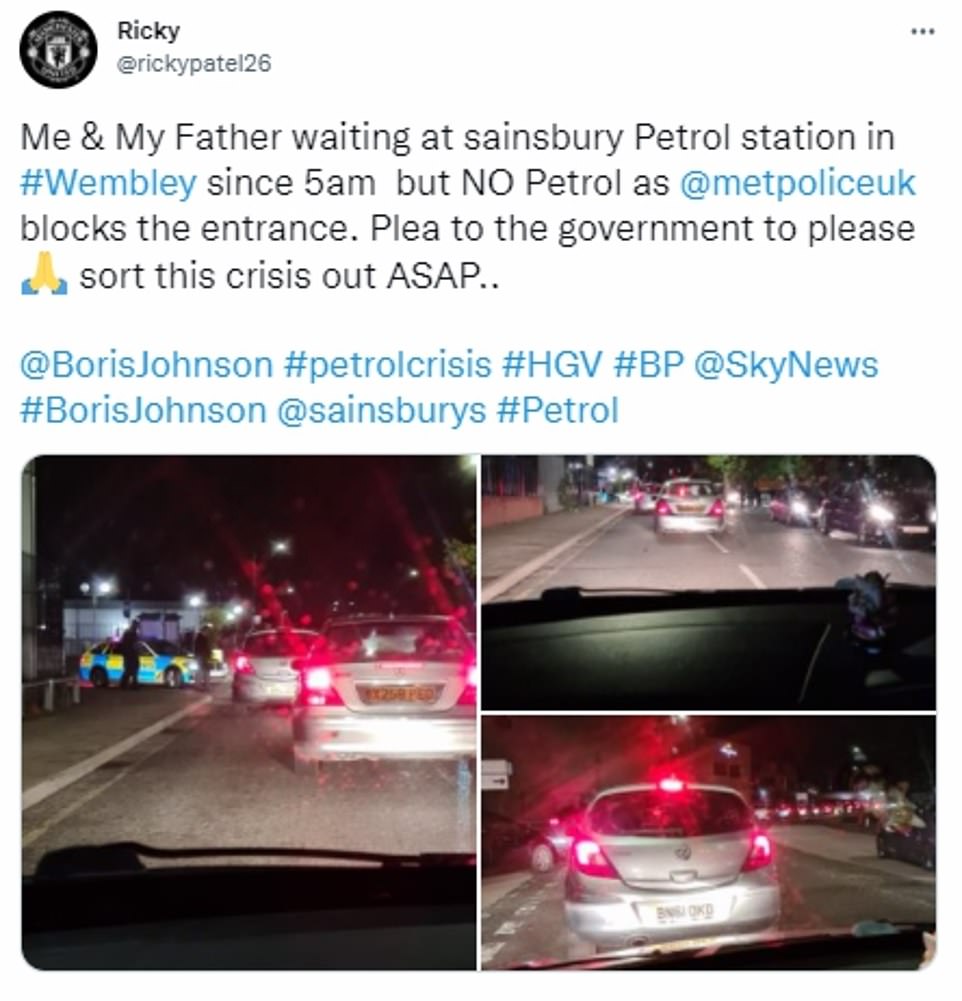 ‘As I say, more fuel is now being delivered to petrol stations than sold. We’re confident that the commercial market can resolve this. We stand by obviously if we need to intervene to act, But equally, the main message today is that there is enough fuel.

‘I understand why people are unnerved by some of the scenes they’ve seen at petrol stations, but if people shop normally this will very quickly correct itself.’

Deputy Prime Minister Dominic Raab has suggested offenders who have been given community sentences could be used to address the country’s lack of HGV drivers amid continuing concerns about fuel shortages.

Business Secretary Kwasi Kwarteng has announced soldiers could be drafted in to drive tankers in the next couple of days to help alleviate the problem. 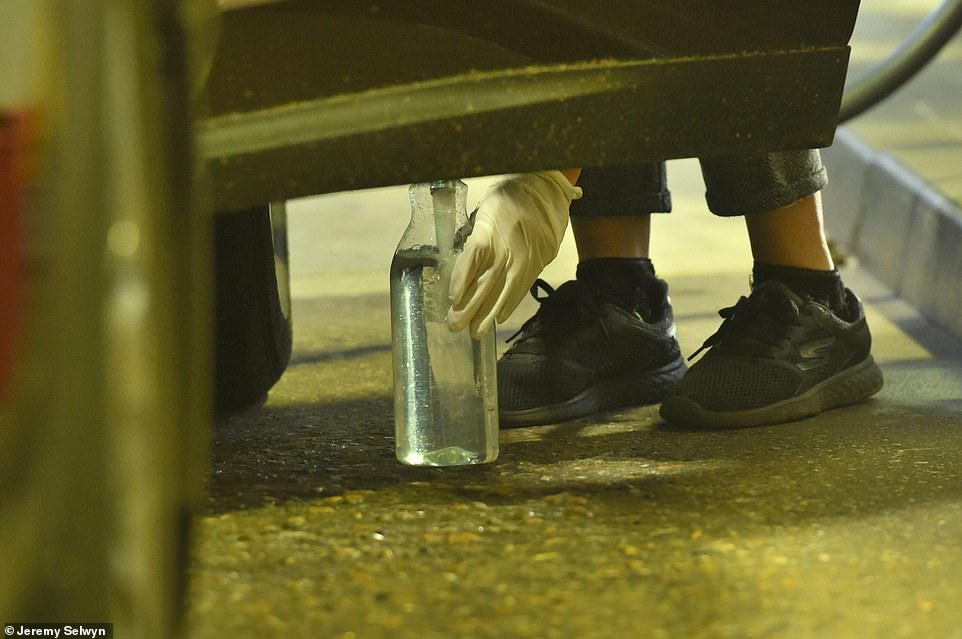 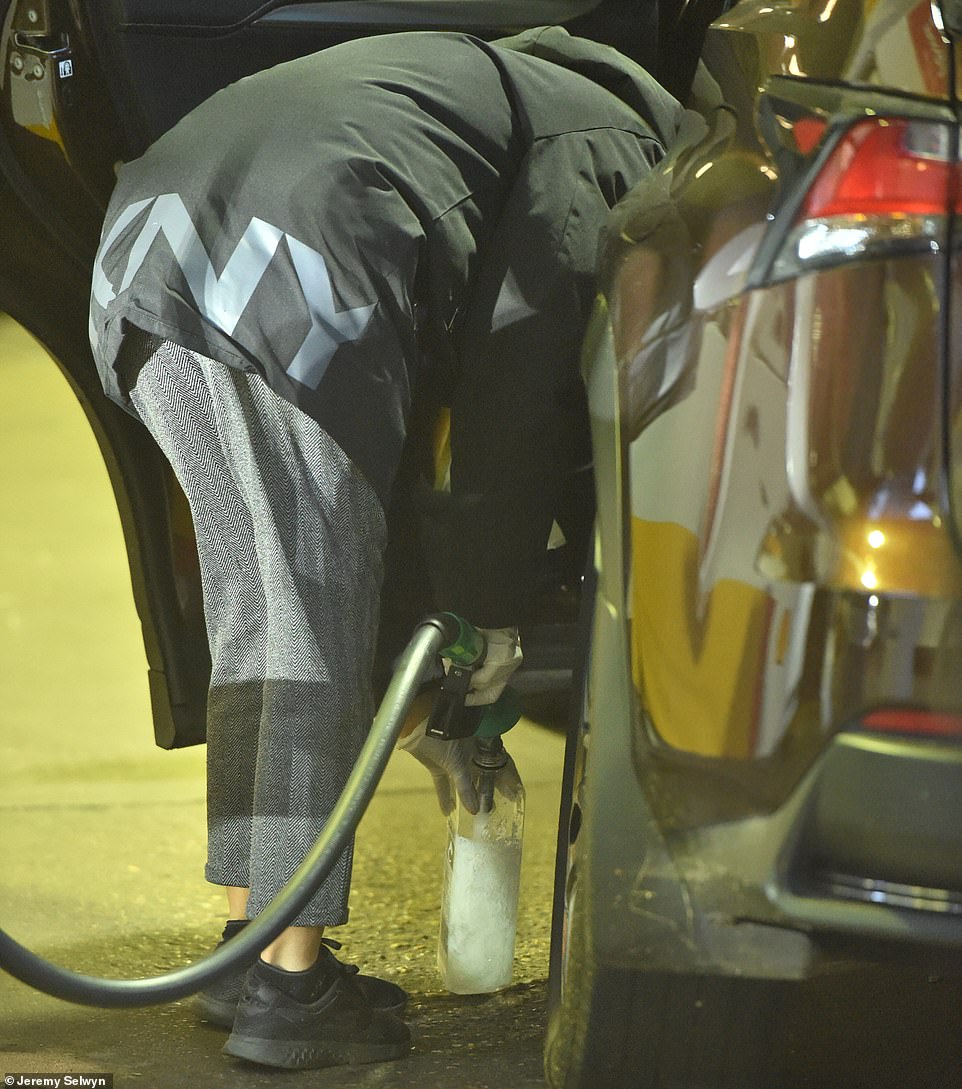 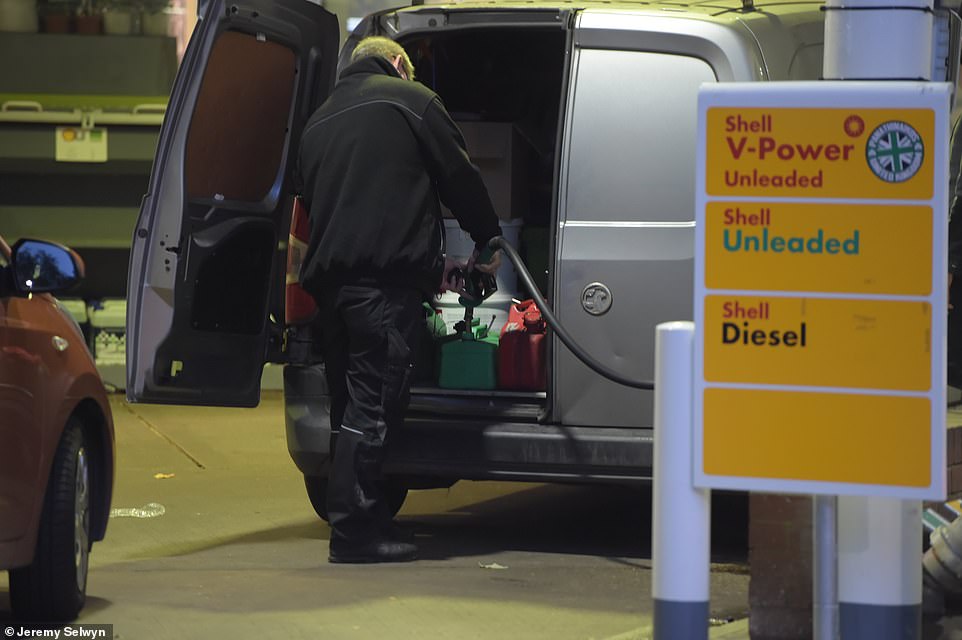 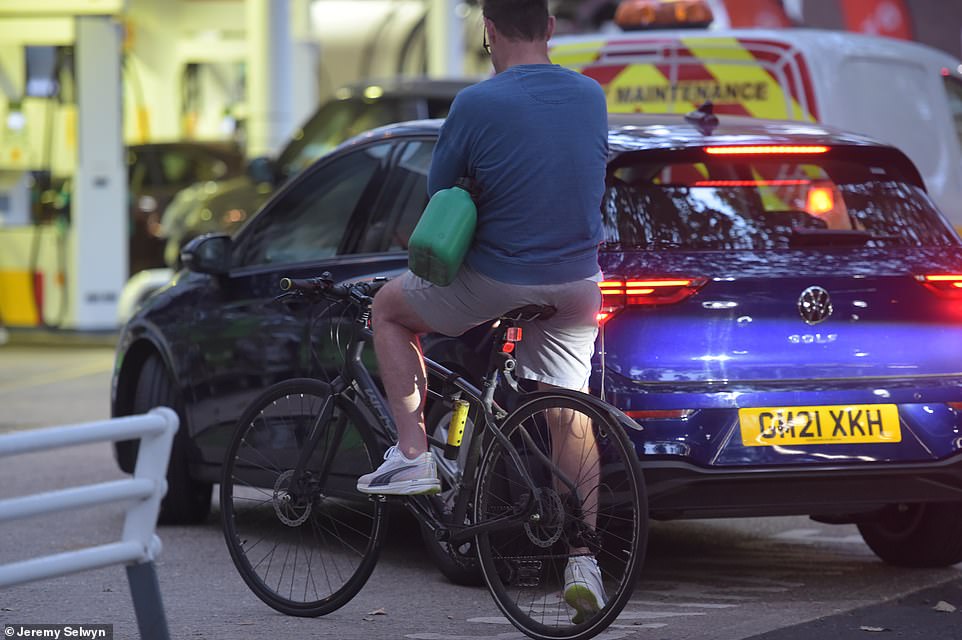 Mr Raab, who was made Justice Secretary in Prime Minister Boris Johnson’s recent ministerial reshuffle, has dismissed Labour’s call for 100,000 migrant visas to be issued to provide sufficient drivers.

The former Foreign Secretary said the move would leave the country reliant in the long term on labour coming from abroad, and instead suggested the gap could be filled in another way.

‘We’ve been getting prisoners and offenders to do volunteering and unpaid work,’ Mr Raab told The Spectator, in comments carried by The Times.

‘Why not if there are shortages encourage them to do paid work where there’s a benefit for the economy, benefit for society? 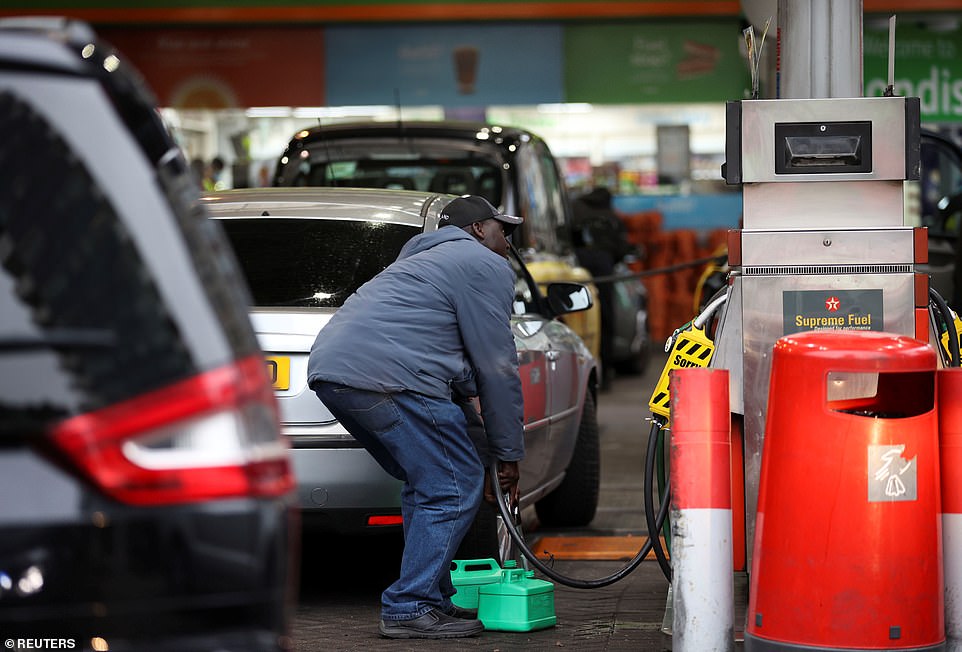 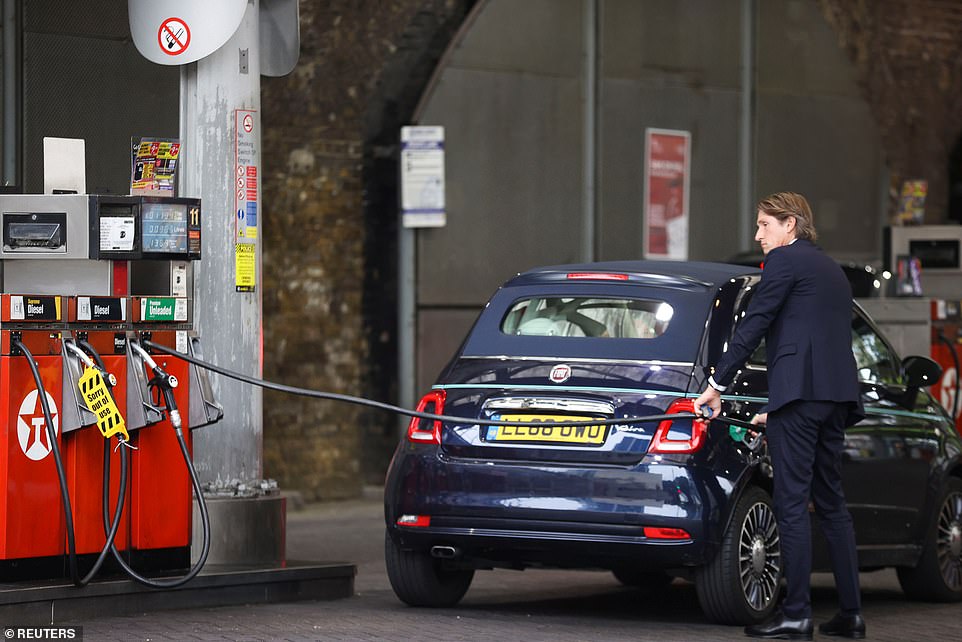 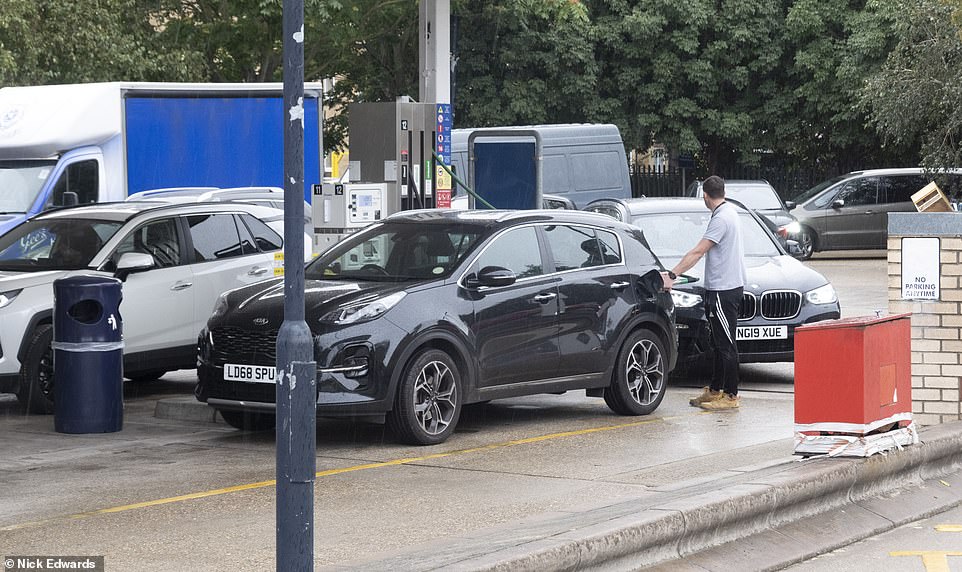 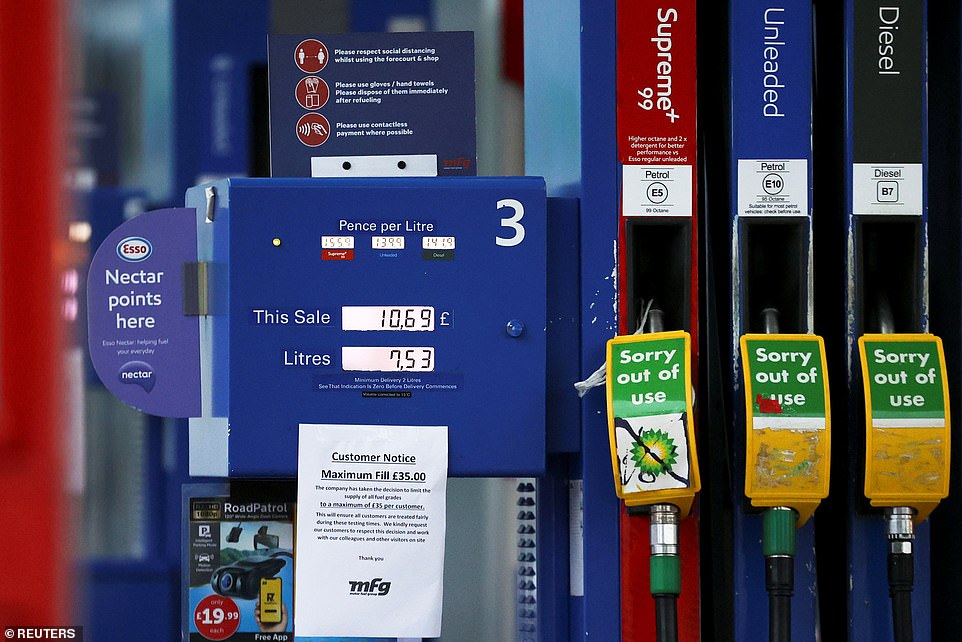 It comes as motorists say there is still not enough fuel despite The Petrol Retailers Association (PRA)’s latest survey of its members finding just over one-in-four had run dry, down from more than a third on Tuesday.

Ministers said they expected the situation to improve further, with the first troops driving tankers expected to appear on the roads ‘in the next couple of days’.

PRA executive director Gordon Balmer said forecourt staff were being subjected to a ‘high level’ of physical and verbal abuse from frustrated motorists.

‘There are encouraging signs that the crisis at the pumps is easing, with forecourts reporting that they are taking further deliveries of fuel,’ he said in a statement. 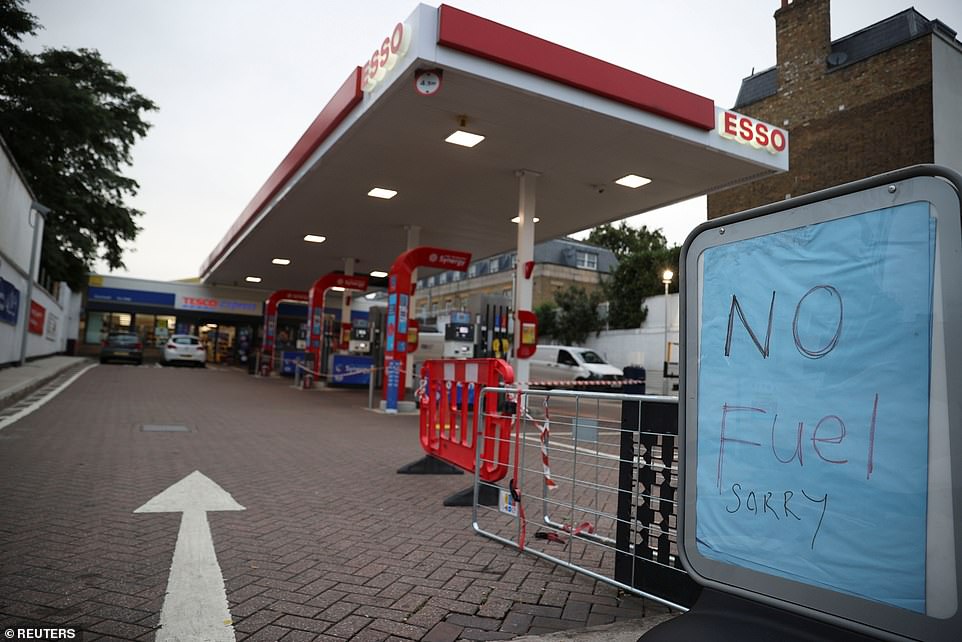 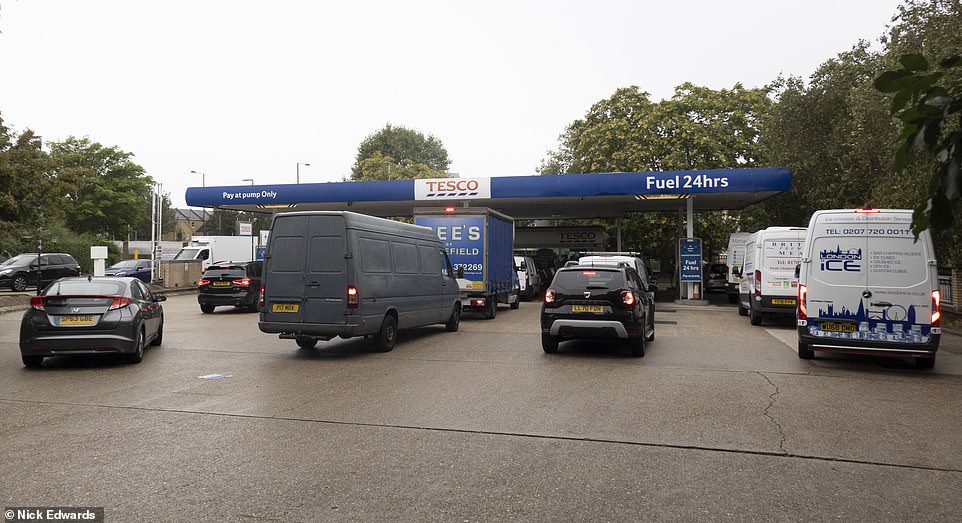 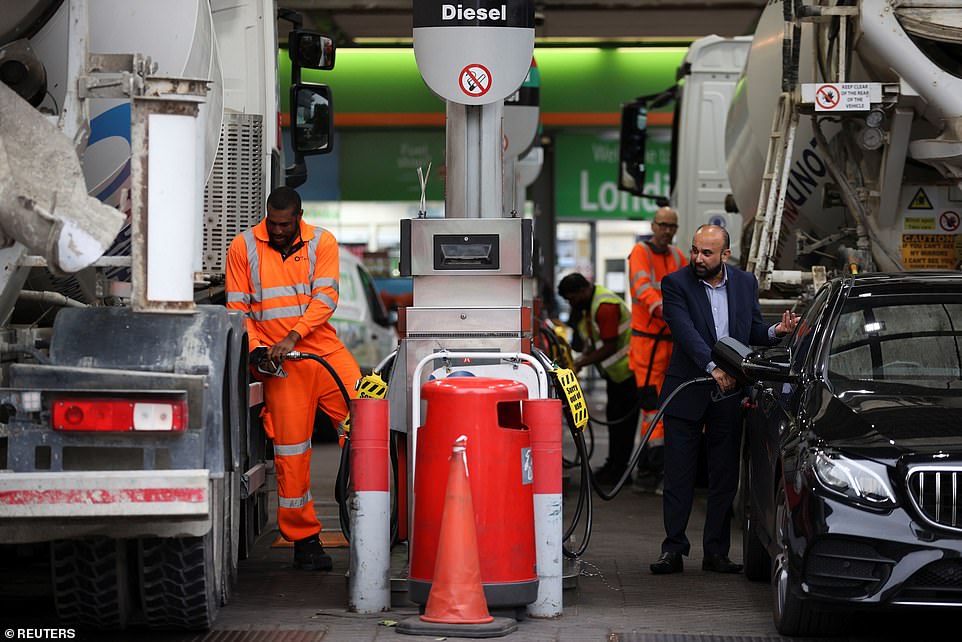 ‘However, we are extremely disappointed to hear many forecourt staff are experiencing a high level of both verbal and physical abuse, which is completely unacceptable.’

His warning comes amid reports of fights breaking out on forecourts with, in one case, footage appearing on social media of a man wielding a knife, as tempers boiled over during long waits to fill up.

Earlier, Mr Kwarteng said the situation appeared to be ‘stabilising’ with most people ‘behaving quite responsibly’.

As well as deploying troops, he said the Government was sending out vehicles from its reserve tanker fleet, driven by civilian drivers, to provide ‘additional logistical capacity’ to the industry. 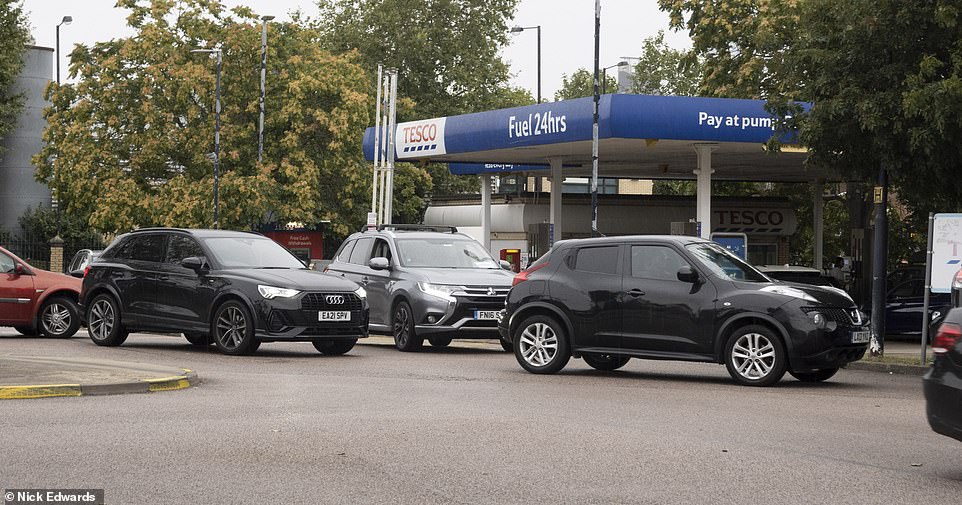 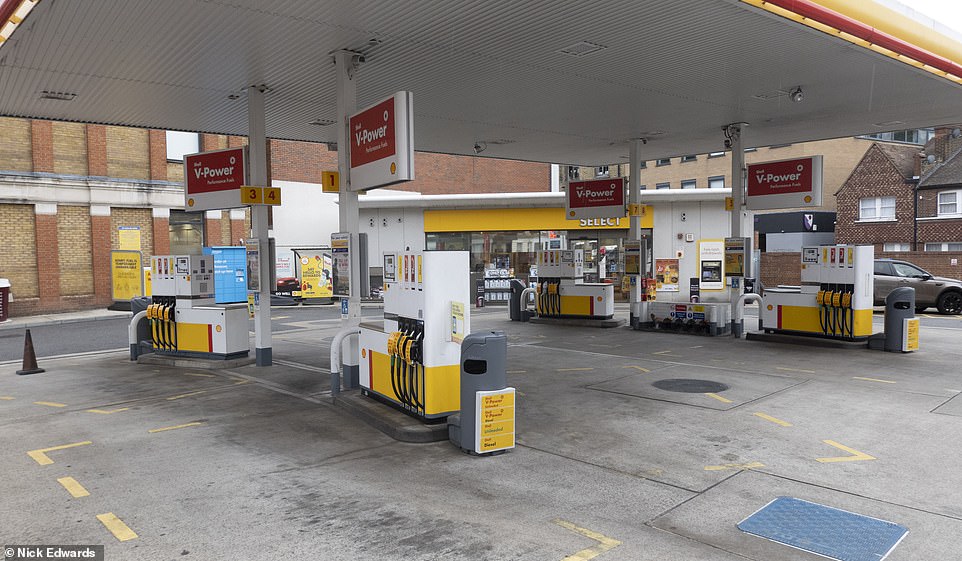 This Shell petrol station in Borough, South London, is out of fuel this morning 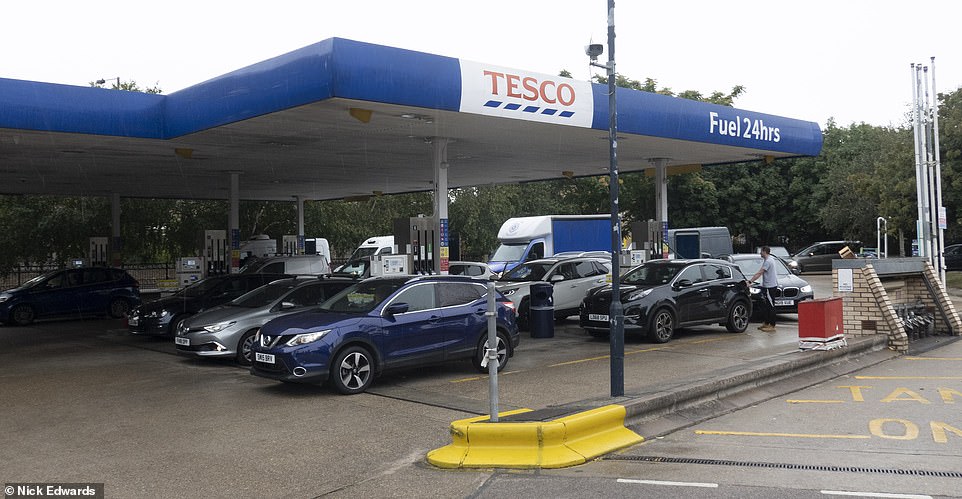 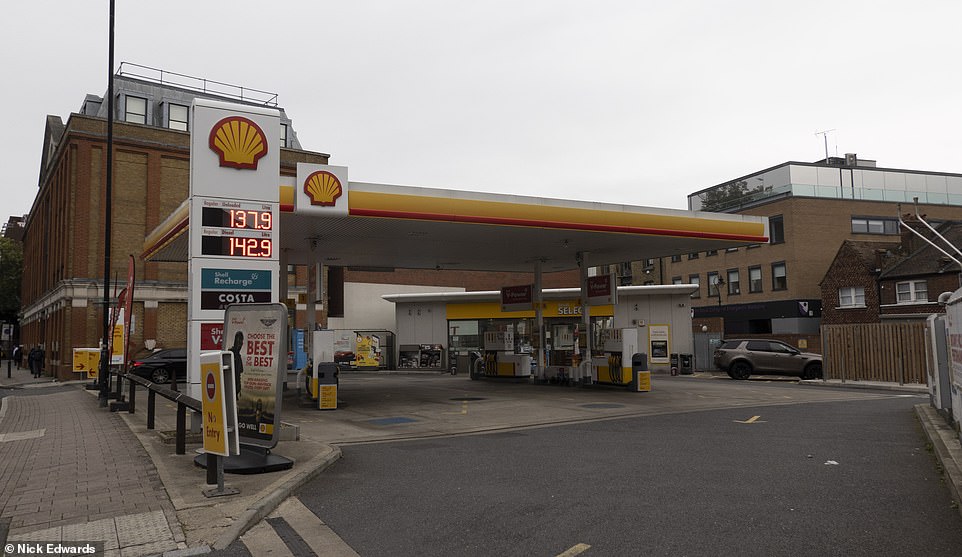 A Shell petrol station in Borough, South London, is out of fuel this morning

‘It takes, sometimes, a few days to get troops on the ground,’ Mr Kwarteng told reporters. ‘We have decided to do that.

‘I think in the next couple of days you will see some soldiers driving tankers,’ he said in a pooled clip for broadcasters.’

Altogether 150 military drivers, together with 150 drivers’ mates, have been on standby since Monday to carry out deliveries to filling stations.

Figures from the Department for Transport have shown there is a backlog of more than 56,000 applications for vocational driving licences, including HGV and bus permits, waiting to be processed.

Ministers have blamed the pandemic, which led to the cancellation last year of tens of thousands of tests.