Royal wedding and the heatwave give the UK’s economy a boost as Brits hit the shops to celebrate, figures today reveal

The UK’s economy grew by 0.3 per cent in May after months of sluggish performance, the Office for National Statistics (ONS) today said.

The same month, millions of Britons hit the shops to snap up bottles of prosecco to toast Prince Harry and Meghan Markle tying the knot at Windsor Castle.

Meanwhile, the heatwave – which kicked off in spring and has sent temperature soaring across the country – has also fuelled a shopping spree.

He said the figures showed a ‘mixed picture of the UK economy with modest growth driven by the services sector, partly offset by falling construction and industrial output’. 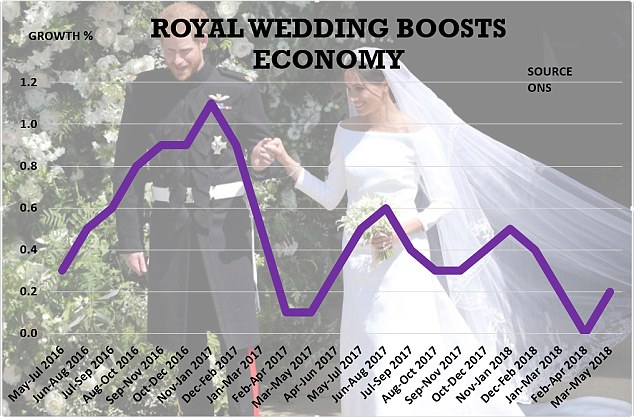 The UK’s economy grew by 0.3 per cent in May after months of sluggish performance, the Office for National Statistics (ONS) today said – the same month Prince Harry and Meghan Markle tied the knot

He added: ‘Retailing, computer programming and legal services all performed strongly in the three months to May, while housebuilding and manufacturing both contracted.

‘Services, in particular, grew robustly in May with retailers enjoying a double boost from the warm weather and the royal wedding.

‘Construction also saw a return to growth after a weak couple of months.’

The figures come despite a year of carnage on Britain’s high streets which has forced many household names to close outlets up and down the country.

Mothercare is closing 60 shops putting up to 9000 jobs at risk, while Poundworld has called in the administrators and axed posts.

House of Fraser is closing 31 outlets across the UK throwing yet more jobs into doubt while Toys R Us has closed down all of its UK stores.

What high street retailers have closed shops in 2018? 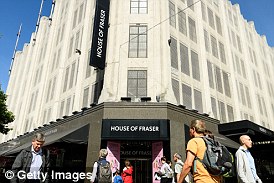 The department store chain House of Fraser is closing 31 of its outlets putting 6,000 jobs at risk

The year has seen a bloodbath of Britain’s high streets – with many of the nation’s retailers shutting stores and axing jobs.

The carpet retailer is closing 92 stores across the UK.

These closures represent nearly a quarter of all UK Carpetright stores.

The UK’s largest toy shop went into administration in February 201, leading to an estimated 2,000 redundancies.

The department store chain is closing 31 of its outlets putting 6,000 jobs at risk

The electronics giant has gone bust, closing shops across the country and putting thousands of jobs at risk.

The baby and toddler chain is closing 60 shops across the UK putting up to 900 jobs at risk.

Poundworld announced it was going into administration on June 11 after talks with potential buyer R Capital broke down, putting 5,100 jobs at risk.

The shops have been squeezed by  fierce competition from other high street names and the rise  of internet shopping.

Many local communities have warned that their high streets are becoming ghost towns as big name retailers  which once attracted the crowds move out.

And while the sunshine and Royal wedding offered a rare bright spot for British business, the UK economy reflects a far more mixed picture.

Construction output fell by 1.7 per cent in May, its third consecutive decrease.

The figures will spark along among politicians who are grappling with a housing crisis amid a long-term failure to build enough affordable homes.

PwC chief economist John Hawksworth said the recent rebound in services and construction output could result in a near doubling of growth in the second quarter.

And he warned that the Bank of England’s Monetary Policy Committee (MPC) could seize upon the figures to raise interest rates next month – hitting homeowners with mortgages.

He said: ‘We estimate that growth in the second quarter will end up at around 0.4%, given signs from business surveys of continued forward momentum in services and construction in June.

‘This pick-up in growth could be enough to tip the majority of the MPC towards a rate rise in August, though this is not yet a done deal given continuing uncertainties over Brexit and rising global trade tensions.’

Bank of England Governor Mark Carney last week highlighted that a recent revision to the first quarter growth rate from 0.1 per cent to 0.2 per cent confirmed his view of the UK’s positive growth trajectory.

He said the incoming data gave him ‘greater confidence’ that softer UK activity in the first three months of the year was ‘largely due to the weather, not the economic climate’.

The Bank is widely expected to raise interest rates from 0.5 per cent to 0.75 per cent in August.

This was mainly down to a big  fall in manufacturing which was down 1.2 per cent. 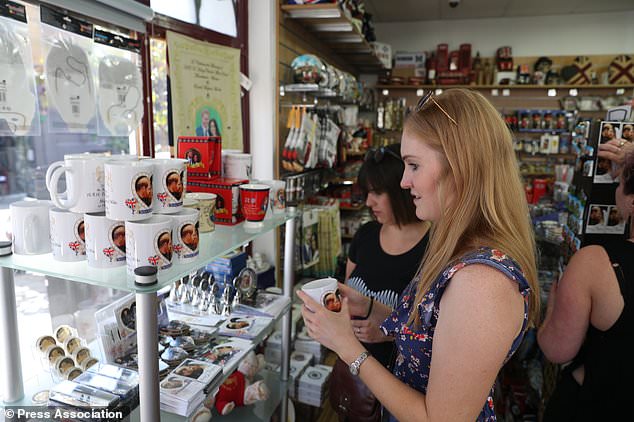 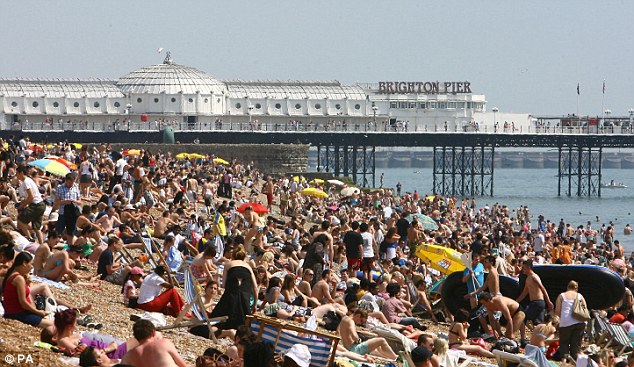 Meanwhile, the heatwave – which kicked off in spring and has sent temperature soaring across the country – has also fuelled a shopping spree (pictured, sun seekers packed onto Brighton beach in May this year)

The total UK trade deficit – the gap between what the country buys and sells – widened £5 billion to £8.3 billion in the three months to May.

This was mainly down to a fall in the amount of goods the country sells abroad.