This week two supreme emperors of cynicism, Donald Trump and Vladimir Putin, met in Helsinki to do … what? To play at being friends, maybe even to make an accord of some kind, recognising that to each of them unconstrained power and profits will always matter far more than human life and dignity. And that democracy – never Russia’s strong point – has become in those two nations entirely subservient to making money. “That’s the nature of capitalism,” says social analyst Naom Chomsky. And it’s getting worse. 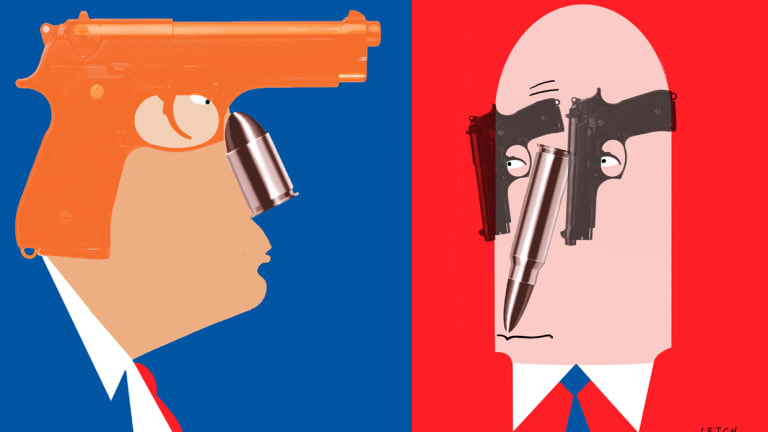 How to make the world more peaceful featured superficially on the the emperors’ agenda. As for detail on how to end the infinitely protracted wars, especially in the Middle East (including Iraq, Afghanistan and Syria), in which their nations are morally and financially implicated, there was none. As Trump tries to retrieve his gaffes, his double negative seems the least of it.

Who wins wars anyway? Millions certainly lose. As each fleeing refugee could attest, war costs people their homelands, families, future, and too often their lives. But winning? That may only be arms manufacturers and traders: the “defence industries” as Minister Pyne prefers. Plus the vast “interests” investing in and profiting from them.

In 2017, global military spending was US$1.68 trillion ($2.2 trillion). The United States led the charge. Its spending was US$610 billion. That leaves out civilian spending on guns, the deadly use of which is promoted as an inviolable “right” by both the National Rifle Association and that savagely deformed version of Christianity known as the Christian Right. The result is 88 guns for every 100 people. With less than 5 per cent of the world’s population, Americans possess 35-50 per cent of civilian-owned guns.

In military spending the two countries trailing the US are China ($US228 billion) and Saudi Arabia ($US69.4 billion). Whatever the rhetoric of rights and security – and there’s plenty of it – arms are the biggest of big business. And when leaders won’t or cannot, then it falls to us to question how this is making the world the slightest bit safer. An unstoppable tide of refugee dispossession is forcing new thinking. Yet in scrambling for solutions to the "refugee problem”, too few are contemplating the pervasively deadly “war problem”.

Australia invests in defence spending close to the same rate as the European countries where Trump was strenuously urging more action. At 2 per cent of GDP by 2020, it’s near twice the rate invested by Canada or New Zealand. By 2025, defence will likely cost our nation $58 billion. Half that spending could be redirected into what diminishes conflict and generates the conditions for peace. We could stand with the most peaceful nations on earth, rather than the most bellicose. Our highly trained forces could focus on skilled peacekeeping, so urgently needed. We could honourably retreat from Minister Pyne’s declared ambition for Australia to join the world’s top 10 weapons manufacturers. We could support the safe return of the already dispossessed through innovative, invigorating, job-generating investment in agriculture, land regeneration, education, conflict resolution, social justice leadership and health. We could be leading, not following. We would be safer. 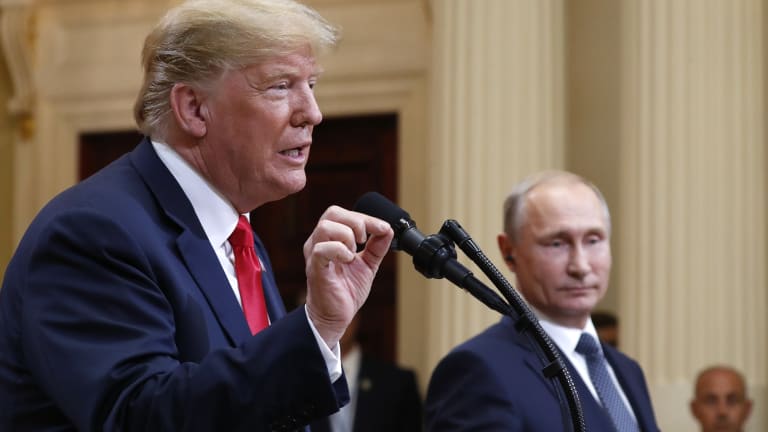 Donald Trump and Vladimir Putin at a press conference in Helsinki.

The odds of course are against this. Views like mine are routinely disparaged. Even the facts are held against us. The arms industries are strenuously protected, most obviously in the US where “special interest” groups openly fund Republican candidates, keeping them beholden to vast, concentrated corporate power. There’s also the terrifying effectiveness of propaganda trading in metaphors of glory, sacrifice and nationalism. This is supported also by sections of the entertainment and media industries where violence is normalised. Packaged as “entertainment”, viewers learn that exploitation and devastation are inevitable. Young children play games that make them feel powerful as characters kill one another. Adults soak up media that repeatedly, gruesomely portray humanity at its mind-numbing worst. We are entitled to ask why. We are in a unique position to envision and support a fairer, finer world. We have the resources, imagination and drive. Through our diversity, we also have a chance to know the world’s people as our own.

This is not, though, just about billions of our tax dollars being lavished on frigates from Britain, drones from the US, or French-inspired submarines – on top of already massive war-ready spending. There’s also ubiquitous, lavishly resourced climate science silencing on a global scale. If gluttonous militarism doesn’t end life as we know it, then Pope Francis has warned of “an unprecedented destruction of ecosystems”, threatening an unprecedented loss of life. Climate science silencing is also funded by big business. And adhered to obsessively by the emperors.

Perhaps these issues have become so tribally divisive that politicians need to call in more expert, less partisan advice in deciding them. It is possible, after all, to calculate with some accuracy the social as well as the economic costs of unceasing wars and increasing weather catastrophes. It’s also possible to face the moral costs of people sacrificed to profits. 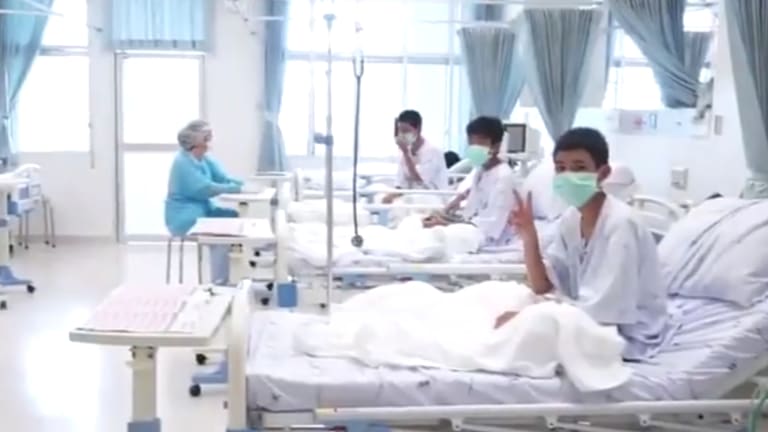 Members of the Wild Boars football team in hospital after their rescue.

Solving problems rather than creating more of them, we need examples of co-operation and not destruction. Maybe it’s the beautiful cave-rescue boys in Chiang Rai – poor, stateless (some of them), heroic (all of them) – plus their courageous, resourceful saviours, who provide those models. Their positivity, faith, gratitude, good humour, unflagging support to one another, as well as the unconditional kindness, courage and skill of strangers, saved them. Forget Helsinki. It’s the Wild Boars and their rescuers we must look to – and take new heart.

Stephanie Dowrick is a writer and social commentator.

Elizabeth Farrelly is on leave.