Seoul: President Moon Jae-in has suggested that US President Donald Trump should win the Novel Peace Prize as South Korean trust in North Korea has surged since last week's feel-good summit at which their leaders declared an end to hostilities and to work towards denuclearisation of the peninsula.

A survey taken on Friday, the day North Korean leader Kim Jong-un met President Moon, showed 64.7 per cent believe the North will denuclearise and keep peace. Before the summit, only 14.7 per cent of those polled said they did, research agency Realmeter said on Monday. 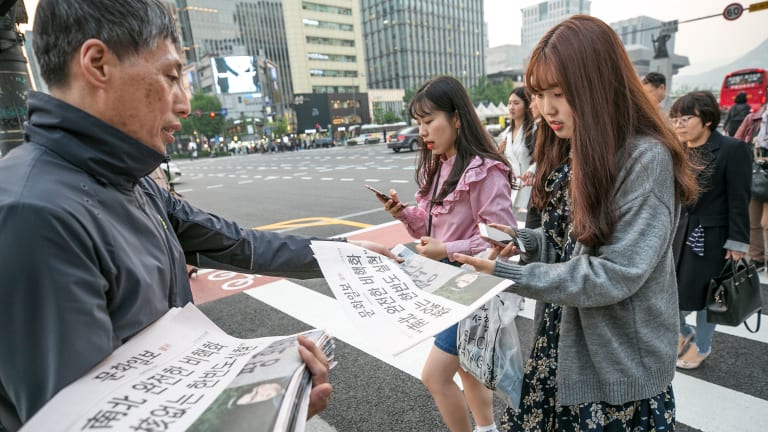 A commuter picks up a copy of the Munhwa Ilbo newspaper featuring an image of the Moon and Kim in Seoul.

One social media post getting attention said that with a successful summit, South Korea should brace for an onslaught of North Korean beer as the first wave of "cultural aggression". A parody showed a South Korean news announcer reporting that Kim complaining about watery South Korean beer compared to Taedonggang Beer featured in the background.

South Korea's stock market got a boost on Monday, lifted by shares of construction companies and train and steel manufacturers on hopes for joint economic projects.

A euphoric mood also enveloped the presidential Blue House on Monday as Moon was greeted by cheers and a standing ovation by scores of aides and staff.

"I am confident a new era of peace will unfold on the Korean peninsula," Moon told his aides, asking them to quickly follow up on the agreements made in Friday's declaration. 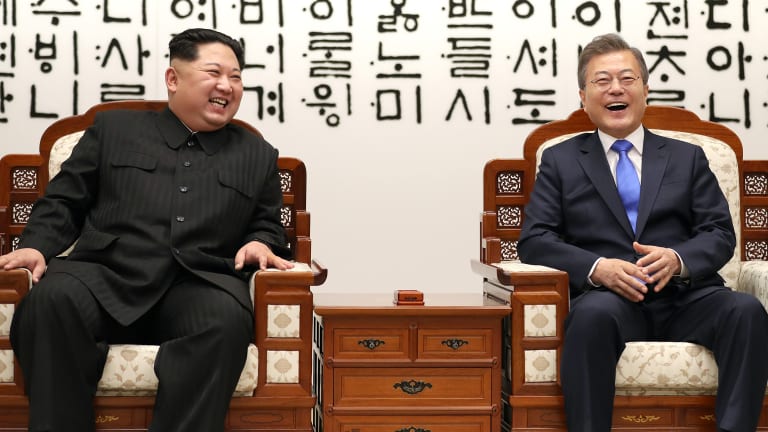 Inter-Korean summit
South Korean President Moon Jae-in (R) and North Korean leader Kim Jong-un burst into laughter as they talk ahead of a landmark summit at the Peace House in the truce village of Panmunjom on April 27, 2018.

The two sides are technically still at war since their 1950-53 conflict ended in a truce, not a treaty.

Moon's approval rating after the summit rose to 70 per cent, Realmeter said, its highest since mid-January. 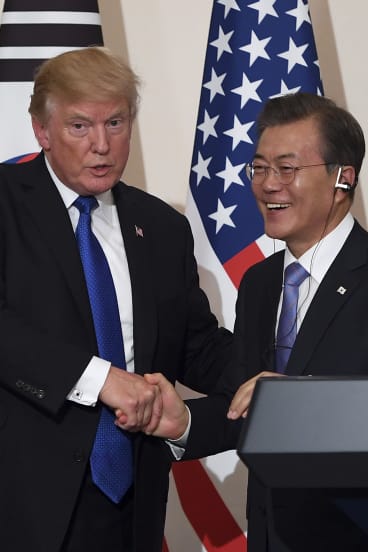 Trump and Moon shake hands during a joint press conference at the presidential Blue House in 2017.

Moon also told aides that Trump deserved the Nobel Peace Prize for helping to end the stand-off with North Korea over its nuclear weapons program, a South Korean official said.

"President Trump should win the Nobel Peace Prize. What we need is only peace," Moon told aides, according to a Blue House official who briefed the press.

In January, Moon had said Trump "deserves big credit" for bringing about the inter-Korean talks, saying it may have come from "US-led sanctions and pressure."

Friday's final declaration, however, leaves many questions unanswered, particularly what "denuclearisation" means or how that will be achieved. Much hinges on Kim's upcoming summit with Trump, who said it could happen in the next three to four weeks.

Any deal with the United States will require that North Korea demonstrate "irreversible" steps to shutting down its nuclear weapons program, US Secretary of State Mike Pompeo said on Sunday.

A flurry of diplomacy is unfolding in the lead-up to that meeting, with China saying it will send the government's top diplomat, Wang Yi, to North Korea on Wednesday and Thursday this week. China is the North's main ally.

In initial small steps towards reconciliation, South Korea said on Monday it would remove loudspeakers that blared propaganda across the border, while North Korea said it would shift its clocks to align with its southern neighbour.

South Korea turned off the loudspeakers that broadcast a mixture of news, Korean pop songs and criticism of the North Korean regime as a goodwill gesture ahead of the summit. It will begin removing the speakers on Tuesday.

"We see this as the easiest first step to build military trust," South Korean defence ministry spokeswoman Choi Hyun-soo said. "We are expecting the North's implementation."

The KCNA dispatch said the decision came after Kim found it "a painful wrench" to see two clocks showing different times on a wall at the summit venue.

The northern time zone was created in 2015 to mark the 70th anniversary of Korea's liberation from Japanese rule after World War Two. South Korea and Japan are in the same time zone, nine hours ahead of Greenwich Mean Time.

Kim also told Moon during the summit he would soon invite experts and journalists from the United States and South Korea when the country dismantles its Punggye-ri nuclear testing site, the Blue House said on Sunday.

North Korea has conducted all six of its nuclear tests at the site, a series of tunnels dug into the mountains in the northeastern part of the country. Some experts and researchers have speculated that the most recent – and by far largest – blast in September had rendered the entire site unusable.

But Kim said there were two additional, larger tunnels that remain "in very good condition" beyond the existing one, which experts believe may have collapsed. 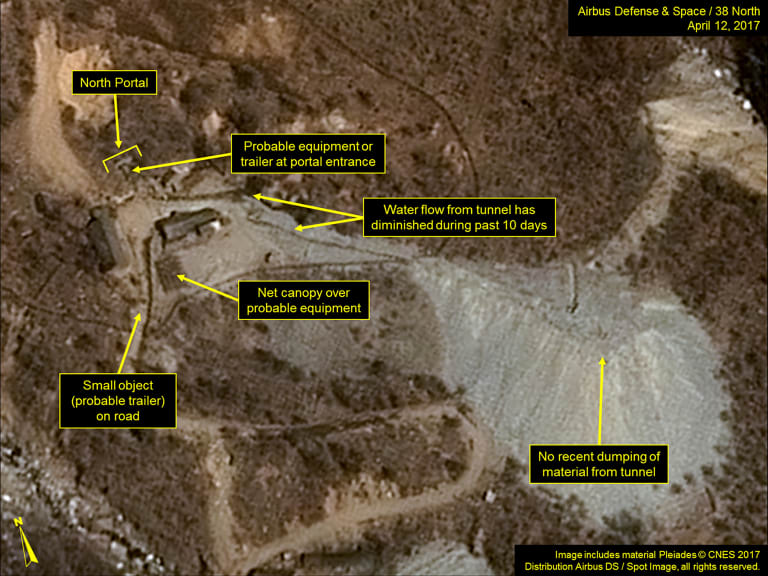