It's fairly standard stuff for campaigns to project outward confidence, to keep supporters energised. But President Donald Trump and his propagandists often go to extraordinary lengths to create the almost cult-like illusion that he is winning everywhere, possesses total mastery of events, and wields absolute dominance over his foes.

This leads to all manner of absurdities: Trump insists he's taking fearsome actions against enemies he isn't actually taking, blames the media for fabricating polls that accurately depict his deep unpopularity, and even pretends large protests greeting him abroad simply never happened. 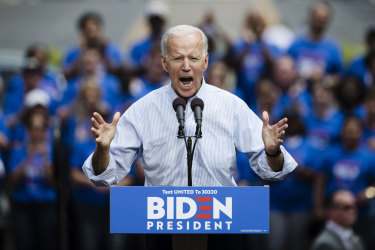 "We have no current polls against defined Democrats – at all – that show him losing in any of the states we have tested," Parscale said.

But it turns out that this, too, represents just more absurd hype. Buried in the Times's account of the firing of Trump pollsters we find this:

The more recent survey conducted by the campaign involved extensive message-testing – in other words, asking questions about support for Mr Trump only after first describing the Democrats in negative terms, according to two people familiar with the data.

Such polling methods can be useful in assessing the strength of various messages but are not considered meaningful bottom-line measures of the current state of a campaign.

That's a crucial revelation. If true, the very best spin that Team Trump can put on its own internal data is that it shows Trump beating Democratic rivals who, for purposes of testing negative messaging against them, were already defined in the polling questions.

So, to review: Trump falsely claimed internal polling showing him losing didn't exist. After that lie imploded, the Trump campaign claimed that in reality, he has been surging, in part due to the Barr summary, which of course says nothing about how the actual Mueller report – which was utterly devastating – might have impacted his fortunes.

That's a useful reminder of what a nakedly political document the Barr summary really was. But it doesn't end there: To buttress the claim that Trump is surging partly due to that Barr effort, the campaign is pointing to data against Democrats that were already negatively defined.

When all the lies become the reality

What's particularly notable about this extensive effort to obscure Trump's true political weakness is that Trump himself knows he's in serious danger of losing re-election.

We know this because The Post and CNN report that these internal numbers, combined with conversations with advisers, explain why Trump has been attacking Biden so regularly. Meanwhile, Trump is "angry" and "livid" about the leak.

Thus, Trump is enraged mainly because he has been revealed as deeply vulnerable to a Biden challenge, but he does appear to know he is vulnerable. It's unclear what the campaign found against other Democrats, but recent polls show Trump trailing many other top-tier challengers.

None of this means Trump won't win re-election. He retains the advantages of incumbency and the good economy. His team is building a genuinely formidable operation. The polling now is far too early to be predictive. But Trump is, in fact, deeply unpopular, and as political scientist Jonathan Bernstein notes, this does render him vulnerable.

It's often hard to know whether Trump believes his ongoing falsifications. In this case, Trump does seem to know he could very well lose. Yet the sheer volume of falsehoods and distortions employed by Trump and his campaign to portray him as dominant and in control – which they plainly see as critical to his political mystique – is in a sense threatening to overtake that awareness.

You can see this everywhere in Trump's ABC News interview. Trump claims internal data showing him losing is "phony" (we now know that's a lie). He cherry-picks polls to suggest his real approval rating is 50 percent (the averages put him below 43 percent). He says approval of the media is "in the teens" (majorities trust the media over Trump). He says he won 52 percent of women in 2016 (in fact, he won 52 percent of white women).

The big story Trump is telling, then, is that the campaign's data shows he's winning and that his public approval rating is soaring; that negative media coverage of his presidency has been discredited; that his very real problem with women (and even white women) is non-existent; and that he really and truly has been totally exonerated by Barr's summary (voters think the opposite about the actual Mueller report).

How much of this does Trump believe? It's hard to say. But it's obvious that, even as Trump clearly knows he's vulnerable, the constant repetition of his preferred story is threatening to swamp that recognition.