Seoul: More than a week of torrential rain in South Korea has left at least 30 dead and 12 missing in landslides, floods and other incidents, the government said Sunday while warning of further downpour.

The causalities include 13 dead and two missing from the last two days of heavy rainfall in southern South Korea, the Ministry of the Interior and Safety said in a report. 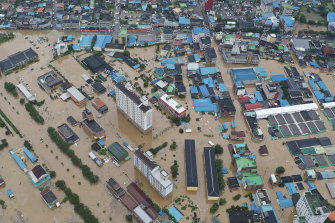 A village area is flooded due to heavy rain in Gurye, South Korea. Credit:AP

The rain on Friday and Saturday also left more than 3,700 displaced as it flooded residential areas, roads and farming fields in the southern region.

The safety ministry said the Seoul area and the southern region are expected to receive more heavy rain on Sunday.