Ottawa, Ontario: A white rental van plowed through pedestrians on a footpath along a busy commercial street in Toronto on Monday, killing at least 10 and injuring 15, and leaving one of the world's safest big cities with a path of carnage that spread over a kilometre. 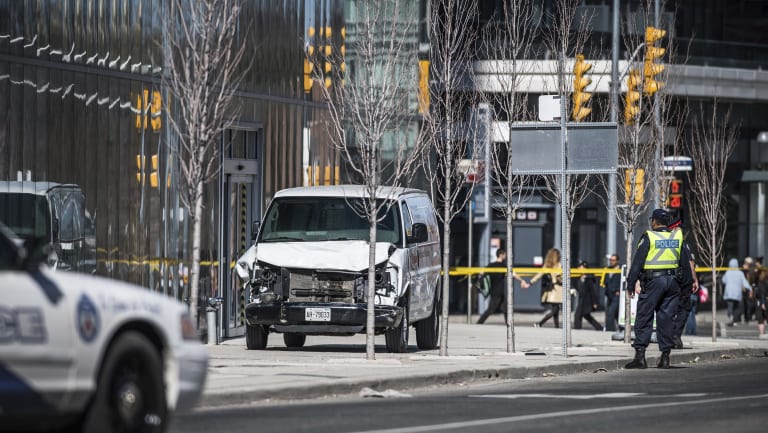 Toronto police officers stand near a damaged van after it mounted a sidewalk crashing into pedestrians in Toronto.

Though officials did not say whether the incident was terrorism-related, it marked the latest grim reminder of how a vehicle could be turned into a weapon – in this case, speeding through a crowd at lunch hour on a sunny day, sending people and mailboxes and baby strollers flying, in what eyewitnesses described as a deliberate act. 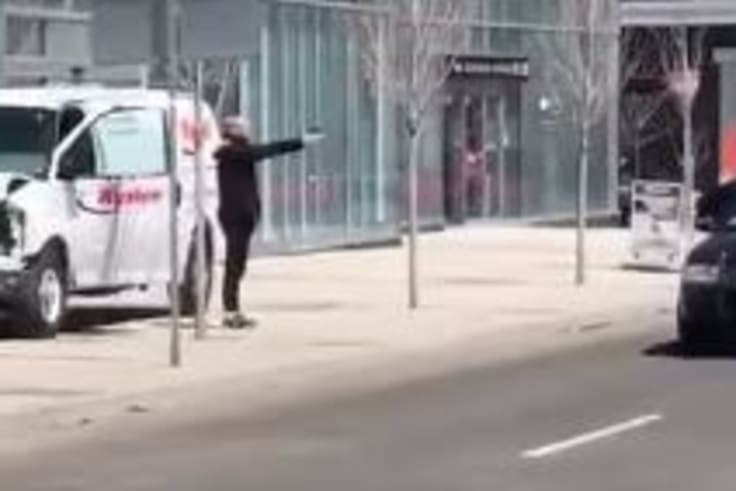 A man confronts police in Toronto after a van ran into pedestrians, killing several.

The driver was taken into custody after a showdown, captured on video, in which he told officers that he had a weapon and said, "Shoot me in the head". He gestured at police with an object and then tossed it onto the ground.

A CBC News Canada report suggested Minassian might have been angry over being rebuffed by women and that a LinkedIn profile under the same name appeared to commend a "Supreme Gentleman Elliot Rodger," who killed six people in a rampage in Isla Vista, California, in 2014.

But Canadian officials were cautious in the aftermath of the incident, saying that they would need a long investigation into one of the country's bloodiest mass killings. Canada's public safety minister, Ralph Goodale, said he saw no reason to raise the national terror threat level. A police photo of the suspect and the names of the victims were not immediately released.

Police said the suspect was scheduled to appear in court at 10am on Tuesday local time (midnight  AEST), and that information on the charges against him would be released then.

The incident had echoes of vehicle attacks in the French city of Nice, as well as in London and New York City. It's a method the Islamic State militant group encouraged followers to use to cause terror.

But mentally ill people with no terrorism connections have also carried out such assaults, including in Melbourne's Swanston Street.

"We lost a little bit of our innocence," John Filion, a city councillor who represents the area where the incident occurred, said in a phone interview.

"We often think of ourselves as being somewhat excluded from the violence and craziness that goes on in other parts of the world. You just kind of don't think of Toronto as a place where that kind of violence will come to." 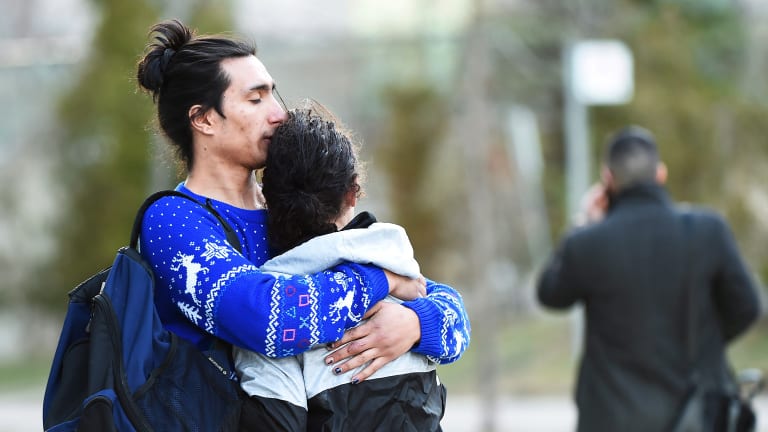 Two people comfort each other after a rented van plowed down a crowded sidewalk, killing multiple people in Toronto.

Peter Yuen, Toronto police services deputy chief, told reporters: "I can assure the public all our available resources have been brought in to investigate this tragic situation," according to the Associated Press.

Save for a police helicopter circling overhead, the incident brought an eerie silence to one of the city's busiest streets, which had been filled on Monday afternoon with people enjoying one of the first warm and sunny days of the year after a long winter.

The attack took place in the centre of North York, a part of Toronto that has grown over the past two decades into a secondary downtown.

The area, dotted with shops, apartment towers and many Korean restaurants, is so heavily trafficked that Toronto's city council debated widening the foothpaths and reducing lanes of traffic to make it more pedestrian-friendly earlier this year. 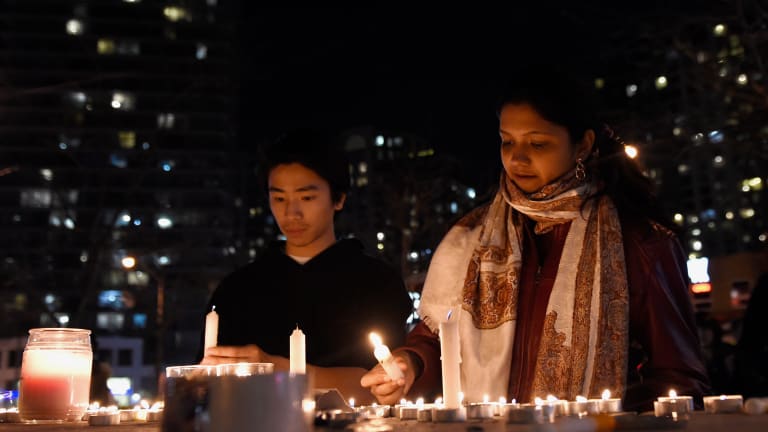 People light candles at a makeshift memorial to the victims in Toronto..

"He started going down on the sidewalk and crumbling down people one by one," Ali Shaker, who was in the vicinity of the incident, told CTV News. "He just destroyed so many people's lives." He said the driver was travelling at an estimated 50 to 70 kilometres per hour.

Teresa Nolan, who lives nearby, walked out of the Sheppard subway station – near where the van came to a stop – shortly after the incident occurred, to "a scary scene". She watched as police officers apprehended the suspect and heard onlookers describing how they performed CPR on the injured.

"I watched it all happen, but didn't really take it all in until after it ended," she said.

Nolan has lived in the area for almost two years and "just loves its whole multicultural feel."

She lives on her own and said she finds the community safe.

"I would never let this deter me," she said. 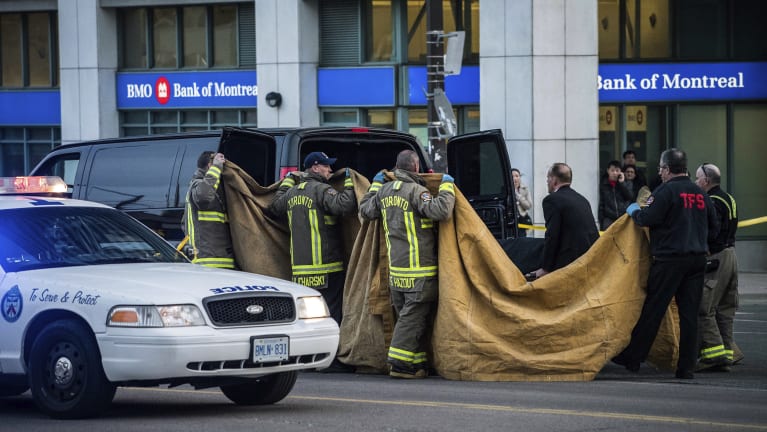 Officials carry a body into a vehicle after the incident police said “definitely looked deliberate”.

Late on Monday evening, Irene Lan, who said she had not been following the news all day, arrived in the area, hoping to pick up dinner from her favourite Korean restaurant.

She was bewildered to find what is usually a bustling street transformed into something resembling a ghost town.

"It's absolutely shocking," she said.

Sunnybrook Hospital, a trauma centre near the site, said it had received 10 victims, all of them adults. Two were pronounced dead, five patients were in critical condition and the rest were in serious condition, according to Dan Cass, the hospital's executive vice president.

Prime Minister Justin Trudeau expressed his sympathies for those involved.

"We should all feel safe walking in our cities and communities," he said. "We are monitoring this situation closely, and will continue working with our law enforcement partners around the country to ensure the safety and security of all Canadians."

While Canadians are proud of living in a country where crime rates are generally low and ethnic diversity is celebrated rather than feared, several terrorism-related incidents in recent years have reminded the public that Canada is not immune to the kinds of events that have struck Europe and the United States.

In September, Abdulahi Hasan Sharif was arrested in Edmonton, Alberta, after two related incidents on the same evening. In the first one, Sharif, a Somali refugee, is alleged to have rammed into a police officer who was at a police roadblock near a sports event. He then stabbed the police officer and escaped. A few hours later, the same man is alleged to have rammed into four pedestrians with a rental van. No one was killed, but Sharif faces multiple counts of attempted murder.

In Quebec City, on the other side of the country, Alexandre Bissonnette is in court this week in a pre-sentencing hearing after pleading guilty last month to six counts of first-degree murder in the shooting of six Muslim men as they attended prayers at a mosque in the city in January 2017. Bissonnette had mental health issues and was attracted to far-right politics and anti-immigrant rhetoric.

And in 2014, Canada's Parliament was the scene of another terrorism-related incident. Michael Zehar-Bibeau, a drug addict and convert to Islam, shot and killed a Canadian sentry on duty at the National War Memorial before heading to Parliament, where he was killed in a shootout with security officers.