Topshop has mounted a discounting frenzy with items on sale on its website for as little as £1 as the former High Street favourite desperately tries to shift stock.

Tops are on sale for £2.40 and blouses for £6, two weeks after the chain’s parent company Arcadia owned by retail tycoon Sir Philip Green sank into administration.

But branding experts have claimed the widespread bargain basement offers may devalue Topshop’s reputation as a buyer is sought to pull it out of trouble.

Mike Ashley’s Frasers Group and Boohoo could be bidders for the fashion retailer, which is still trading and valued at £200million while a rescue package is sought.

There are now 13,000 jobs at risk at Arcadia, which also owns Dorothy Perkins, Miss Selfridge, Wallis, Evans and Burton, and runs 444 stores in Britain plus 22 overseas. 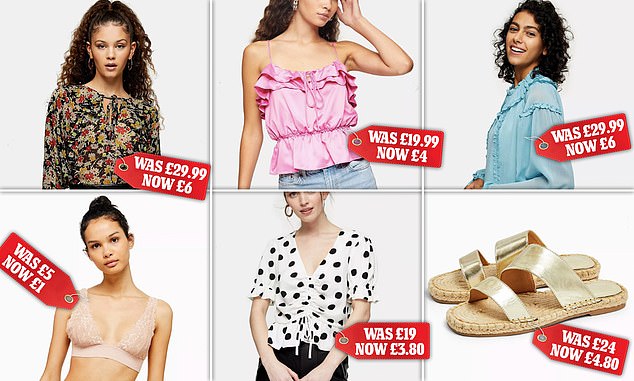 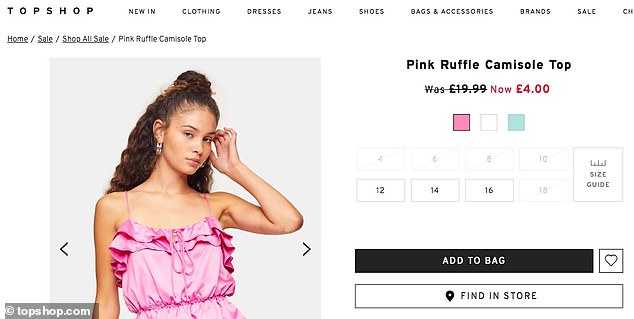 And in the meantime it appears Topshop is desperately trying to secure a flurry of online sales with knock down prices seeing items go out of stock within hours.

Lace Brazilian knickers are now on sale for £1 while a sage ruched bandeau is £3 and a white ribbed cropped top and black and white animal scoop cami are both £2.40.

Other tops are going on Topshop’s website for only £2, while a peach tie-shoulder shirred top is £6 and a black and white spot ruched top is £3.80.

A black ruffle star print blouse sold out in hours when it was reduced to just £6, while shoes start at just £4.80 with Dara black sandals are also very cheap at just £6.40.

But branding expert Marcel Knobil said: ‘There are some drastic discounts on Topshop.com, but it’s difficult to establish whether this is due to its current situation. 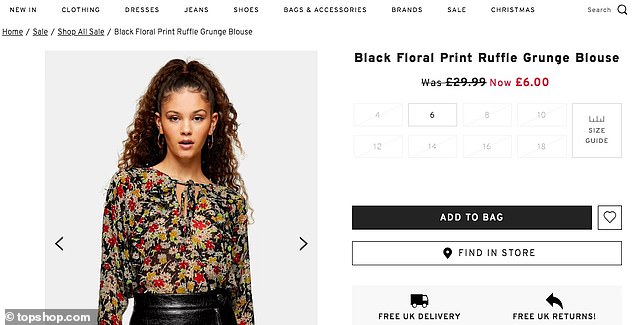 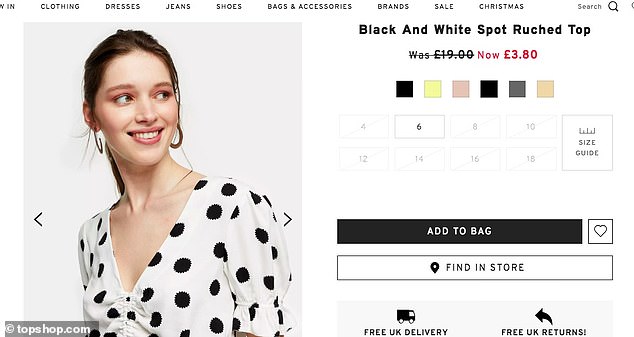 A black and white spot top is down to £3.80 having previously been available for £20 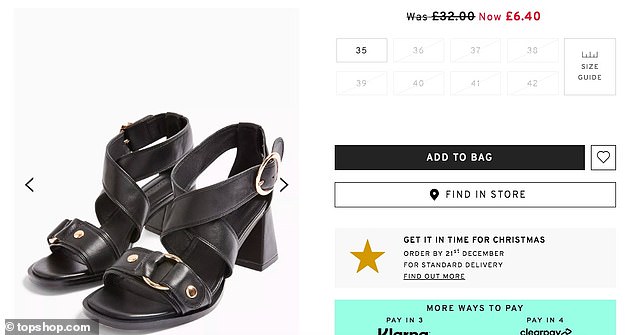 Dara black sandals are now priced at just £6.40 having previously been priced at £32 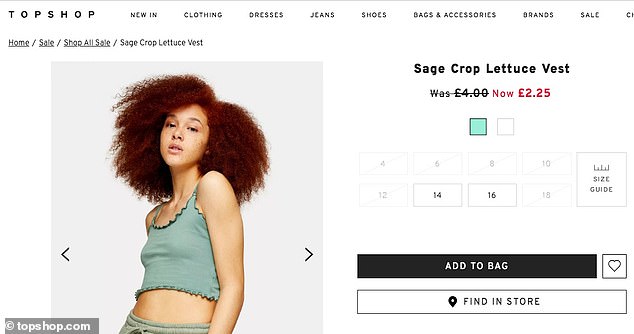 This sage crop vest has been reduced from £4 to £2.25 as part of Topshop’s online sales

‘Topshop’s administrators will certainly want sales to look healthy at the moment to attract any potential buyers of the brand.

‘At the same time though, any future buyer will not want to see the reputation of the brand further eroded.

‘Topshop has invariably delivered value, but if it appears that the store is practically giving away stock then it can severely undermine the brand.’

He added : ‘There was a time when the brand had such impressive fashion credentials that well-heeled Bond Street shoppers would pop across to the store and complement their outfits with Topshop merchandise.

‘It is so sad to see a brand that was so desirable spiral into a mediocre offering. 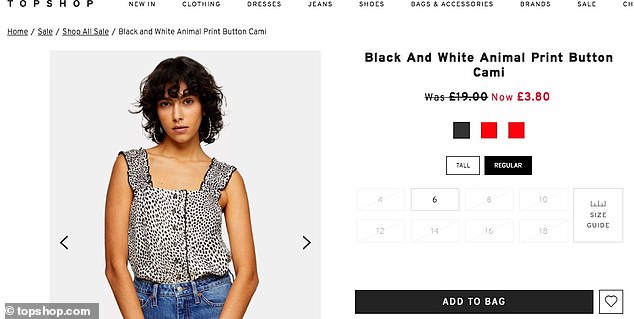 A black and white animal print top is down from £19 to £3.80 on the Topshop website 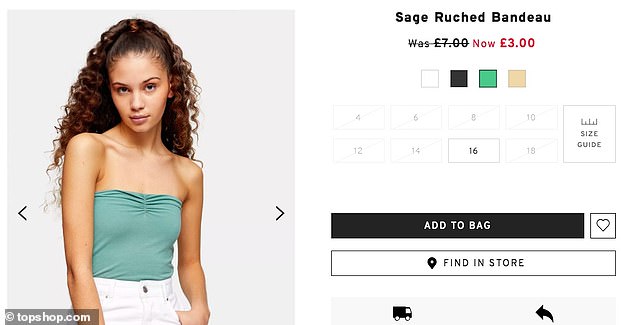 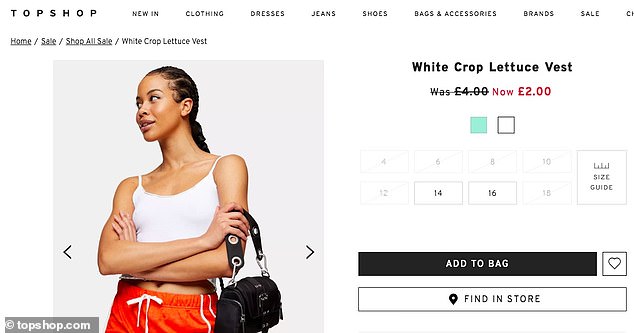 ‘I’m sure there are fashion businesses considering rescuing the brand. However, it will take significant investment and prudent brand navigation to successfully reinvigorate it. At the moment it certainly will feel tough at the Topshop.’

Administrators at Deloitte are said to be looking for bids of up to £200million for Topshop, with initial bids expected to be filed by the end of next week.

It comes after consultancy Brand Finance valued Arcadia’s brands at £800million in January, with Topshop alone said to have been worth nearly £400 million.

But Brand Finance now believe the brands could be worth only half. Deloitte joint administrators Daniel Butters and Gavin Maher were brought in on November 30.

Yesterday, Frasers Group revealed it could still buy Arcadia brands including Topshop as it attempts to mount a parallel rescue of Debenhams. 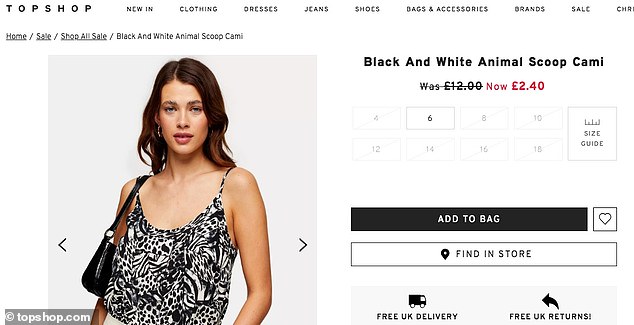 A black and white top is reduced to £2.40 having previously been priced at £12 by Topshop 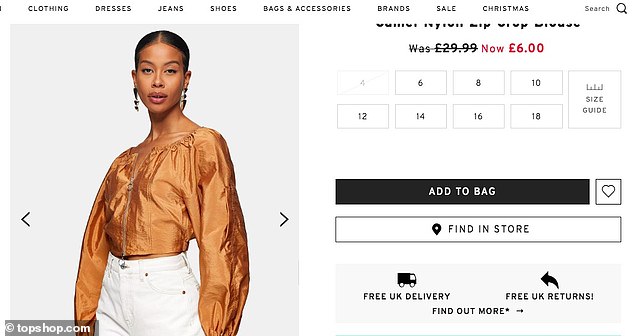 The firm’s finance chief, Chris Wootton, confirmed talks were continuing with administrators of both collapsed retailers ‘about what the future might hold for us’.

It raises the prospect that Sports Direct and Newcastle United FC owner Mr Ashley could swoop in to get both, greatly expanding his already-vast High Street empire.

Arcadia crumpled after the impact of pandemic restrictions pushed its finances to breaking point, and it was followed by department store Debenhams.

Debenhams relies on Arcadia brands such as Topshop, Burton and Dorothy Perkins for around 5 per cent of sales. Together the two firms employ nearly 30,000 staff. 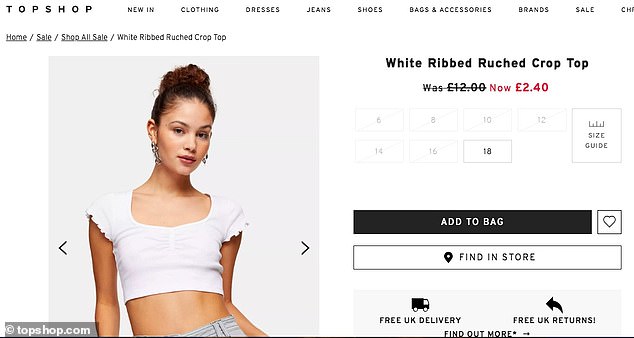 This white crop top is down from £12 to £2.40 as Topshop tries to shift its online stock 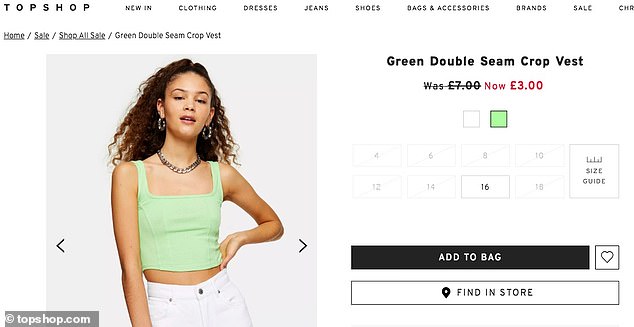 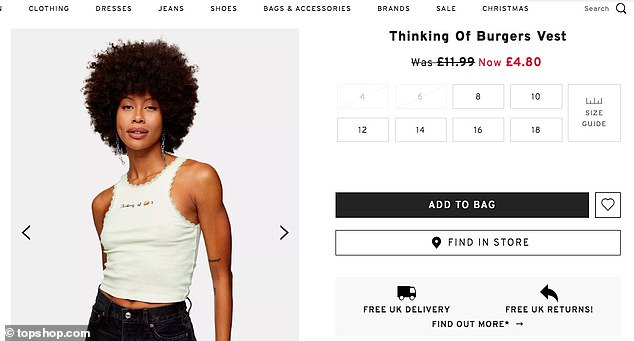 This vest is priced at £4.80 after being reduced from £12 by Topshop’s online store

Mr Ashley’s offer to provide an emergency loan to his former mentor Sir Philip was turned down, but he is still said to be interested in buying some of Arcadia’s brands.

The 56-year-old is also trying to fulfil his long-held ambition of buying Debenhams, but that is being complicated by the firm’s ties to Arcadia.

Several household names collapsed in 2020. Laura Ashley, Peacocks, Bonmarche, Jaeger and Brighthouse went bust, while TM Lewin, Oasis and Warehouse have disappeared from the high street and gone online only. Cath Kidston went into administration resulting in it closing all but one of its 60 stores.

An estimated 200,000 retail workers have lost their jobs this year, while more than 20,000 shops have closed as coronavirus accelerated the decline of the high street and the shift to online shopping.