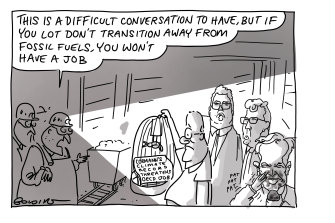 To submit a letter to The Age, email [email protected] Please include your home address and telephone number.

This is a bad idea

Why is the Victorian government even thinking about a traffic light system for NSW travellers into our state?

Bitter experience has taught us how quickly outbreaks spread, and the heartbreaking consequences that follow. We fought hard to earn our current COVID-free status, and that status is at now risk of being shattered into tiny pieces.

With thousands of people expected to be moving around over Christmas, now is not the time to be playing COVID roulette. It’s time to close the borders, now.
Linda King, Docklands

Obedient to a fault
I concur with Waleed Aly’s article on Australians’ image of themselves as larrikins being at odds with the reality of an extremely obedient people (‘‘Carefree larrikins? You’re joking’’, Comment, 18/12). When I arrived in Australia, I thought this was one of the most obedient nations I had ever lived in or visited. I still think this.

It is undeniable that it has served us well during the pandemic but it does not serve democracy or human rights well. Too many people have followed the rhetoric of ‘‘illegal asylum seekers’’ and allowed our governments to get away with cruel practices, and contra to the UN Declaration of Human Rights, imprisoning the Biloela family on Christmas Island and other refugees in offshore detention camps and in hotels.

Kieran Pender’s article on whistleblowers also speaks to this (‘‘When the cost of courage is too great’’, Comment, 18/12). What Australian governments have been able to get away with in persecuting whistleblowers is tied in, I think, to the obedience of Australians.

We must foster an attitude of social justice in this country and of protecting whistleblowers, whether they are exposing wrongdoing in organisations or any tier of government. Robust IBACs in every state, territory and federally are vital.
Charlotte Brewer, Shepparton

Taking the credit
In an era of ‘‘false news’’ and quotes wrongly attributed to historic political figures, The Age’s arts editor, Nick Miller, is to be heartily commended for having the Oxford Dictionary of Modern Quotations correct a famous entry wrongly said to have been uttered by the late British politician Enoch Powell.

As Miller suggests in his delightful article (‘‘The (really) true story of how I made Oxford rewrite a dictionary’’, 19/12), there is now a veritable industry of quotes misattributed to Winston Churchill. Likewise Lenin: it is now finally accepted, for example, that the much-used derisory expression ‘‘useful idiot’’, denoting a gullible Communist fellow-traveller, never passed the Soviet icon’s lips.

Literary personages are not exempt, either. Any quiz or crossword designer’s clue involving George Bernard Shaw, Oscar Wilde or Mark Twain should acknowledge that these men are now one and the same person, such is the continuing credit given to them for the others’ quotes.
Jon McMillan, Mount Eliza

The need to feel safe
Does anyone realistically think that a COVID-19 outbreak in a ritzy, well-heeled apartment complex would be handled in the same way as the public housing lockdown?
Welfare recipients and public housing tenants are too often treated as second-class citizens. I have

worked with refugees and migrants who lived in public housing and know of their attempts, in vain, to get dangerous problems resolved, including syringes littering the public areas, residents housing aggressive dogs, and cigarette butts left smouldering inside the building.

The greatest need for people from traumatic backgrounds is to feel safe within a trustworthy environment. The lockdown may have been to save lives but, with no communication to that effect, the chaos could not help but alarm, frighten and further traumatise people in what should be their safe homes.

An apology shows respect and should never be denied, let alone in a high-handed manner, when it would help heal such a serious breach of trust.
Barbara Chapman, Hawthorn

A new system needed
As the family of Tanya Day are left to process the failure of police accountability for yet another death in custody, Police Minister Lisa Neville maintains that police discipline is a matter for the force itself (‘‘Family ire at penalty for police over cell fall death’’, The Age, 19/12).

We desperately need a new system, beginning with a police minister capable of comprehending the fundamental flaw in allowing police to investigate police.
Don Stokes, Heidelberg

Question on notice
After reading ‘‘A bitter taste from Subway to Flower Drum: Five lessons can be learnt from the Casey corruption scandal’’ (The Age, 19/12), I would like Dan Andrews and Michael O’Brien to answer, without deceit or waffling, why Victorians should believe any Victorian politician on any matter.
Adrian Tabor, Point Lonsdale

They make it difficult
As I struggled for 10 minutes to separate the paper and the soft plastic components in a padded envelope, I wondered first whether or not this was really necessary and if so, why was that information not provided.

Consumers, who seem to have the majority of the responsibility for making recycling work, are often not given the information needed. Why is there no responsibility anywhere within the supply chain for someone to be responsible for letting the ultimate consumer know what can be recycled and what can’t? Many plastic containers contain no information and, surprisingly, some plastic containers suggest using a rubbish bin constitutes responsible disposal.

I see no hope for successful recycling on a significant scale unless governments step up and insist the end user is provided with the necessary information, especially about the plastic containers that provide much of our purchased processed foods.
Terry Bourke, Newtown

Note from the Editor

The Age’s editor, Gay Alcorn, writes an exclusive newsletter for subscribers on the week’s most important stories and issues. Sign up here to receive it every Friday.