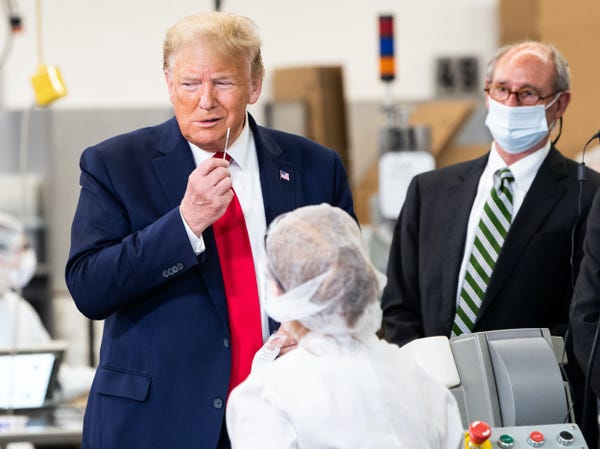 President Donald Trump and First Lady Melania are now among the more than 7 million Americans who have tested positive for the novel coronavirus.

Since the arrival of COVID-19 early this year, the world has watched as people who work in the White House or close to the couple have been diagnosed, questioning whether or not Trump or his wife had been exposed.

On Thursday Trump was tested for the novel coronavirus after his close confidante and White House counselor, Hope Hicks, tested positive earlier this week. He and Melania Trump announced hours later that they had been infected and were in isolation.

Here are the men and women who work within the walls of the White House who we know have had positive tests. 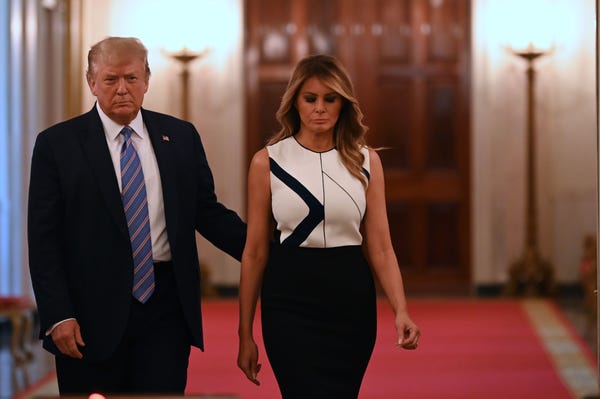 President Donald Trump tweeted just before 1 a.m. on Friday that he and Melania had tested positive for the coronavirus and would quarantine.

White House physician Sean Conley issued a statement confirming the diagnosis, and said that the couple were "both well at this time" and planned to remain at the White House during their recovery.

Being over 70 and clinically obese, Trump is at high risk of complications from the coronavirus.

If Trump becomes incapacitated, Vice President Mike Pence would be next in line to act in his place. 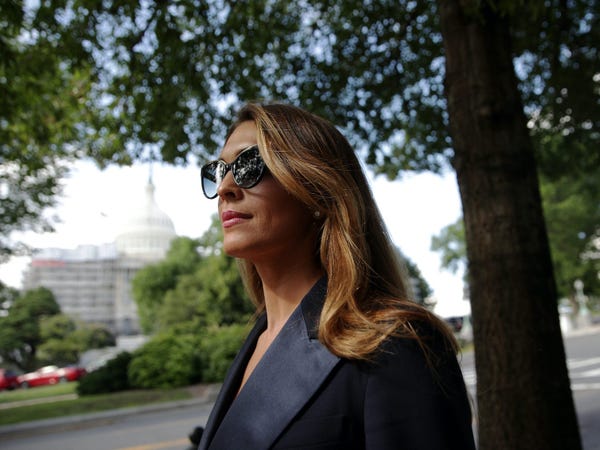 The White House became aware on Wednesday that Hope Hicks, counselor to the President, had tested positive for coronavirus.

Bloomberg News, The New York Times, and CNN reported on Thursday that Hicks traveled with Trump aboard Air Force One to and from the first debate Tuesday between him and the Democratic nominee Joe Biden.

Hicks, 31, has told people close to her that she is experiencing some symptoms of the disease.

She was not wearing a mask Tuesday when she rode in a staff van with White House adviser Stephen Miller, Trump campaign adviser Jason Miller, and some others, Bloomberg reported. 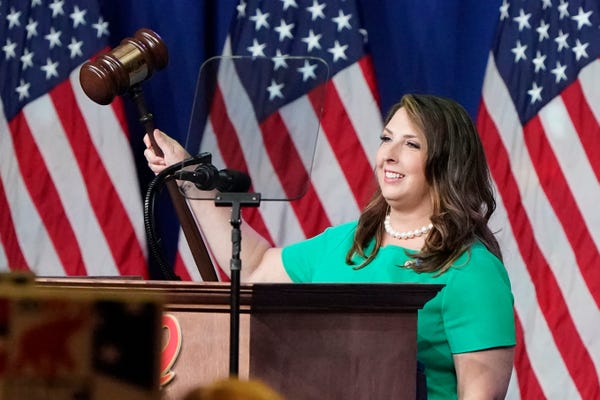 Ronna McDaniel, chairwoman of the Republican National Committee, tested positive for the coronavirus on Wednesday.

McDaniel has mild symptoms. She was with President Donald Trump last Friday, but has remained at her home in Michigan since last Saturday, Business Insider's Eliza Relman reported.

The chairwoman didn't go public with her diagnosis until after the media reported it Friday. She did a remote interview on Fox News  a day earlier without making any mention of it. 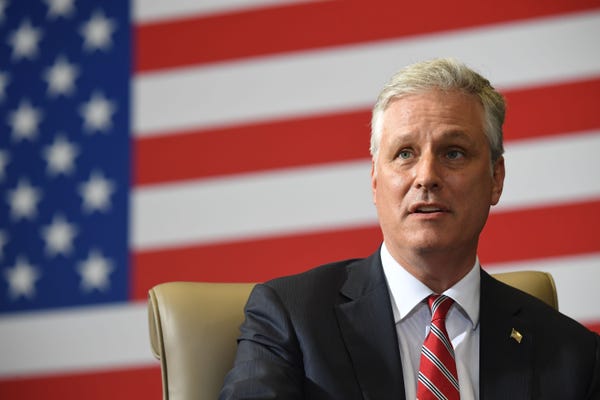 National Security Advisor Robert O'Brien became ill with the coronavirus in July after attending a family event, Bloomberg first reported at the time.

At the time, O'Brien was the highest ranking official who had tested positive.

O'Brien, 54, hadn't worked in the White House for a week before he was diagnosed. 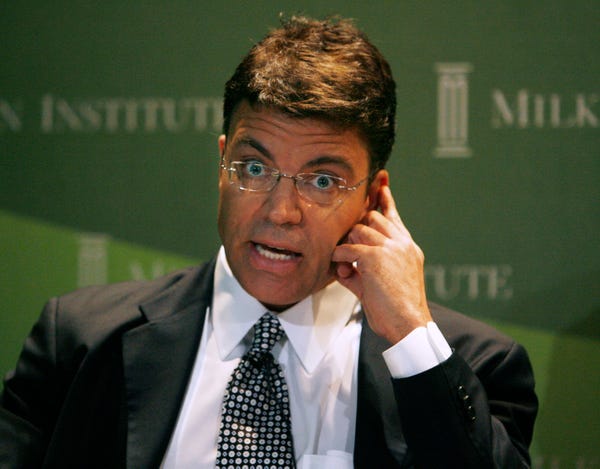 White House economist Tomas Philipson announced in June that he had a mild case of the coronavirus, with a fever that lasted one day, The Wall Street Journal reported at the time.

Philipson was the acting chairman of the White House Council of Economic Advisers, but left his position later in June.

After recovering, he told The Journal that he planned to return to his professorship at the University of Chicago. 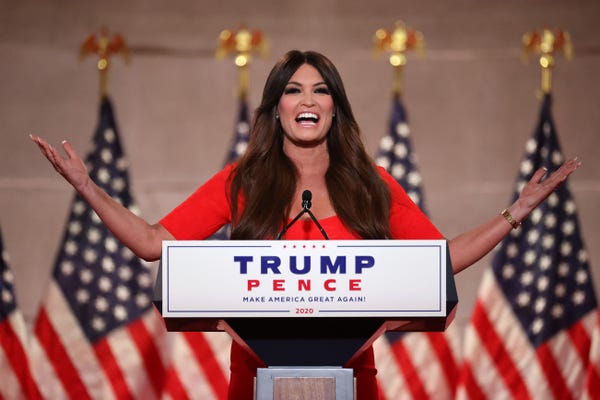 Kimberly Guilfoyle, the former Fox News host and senior adviser to the Trump campaign, received her positive test result just before she was slated to attend a Fourth of July celebration at Mt. Rushmore.

Guilfoyle, who is also Donald Trump Jr.'s girlfriend and oversees fundraising for the president's reelection campaign, didn't travel with the president to the event and was isolated after her diagnoses.

"After testing positive, Kimberly was immediately isolated to limit any exposure," Sergio Gor, the chief of staff for the Trump Victory Finance Committee, told CNN at the time. "She's doing well, and will be retested to ensure the diagnosis is correct since she's asymptomatic, but as a precaution will cancel all upcoming events."

Donald Trump Jr. was not infected at the time. 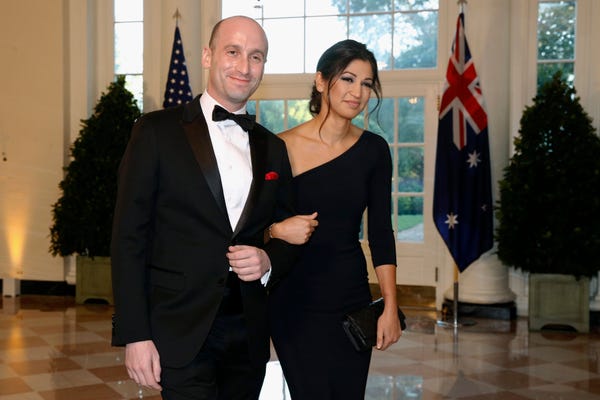 The vice president didn't quarantine, despite having spent time with Miller.

When Miller returned to work at the end of May, she announced that she was both coronavirus free and pregnant. 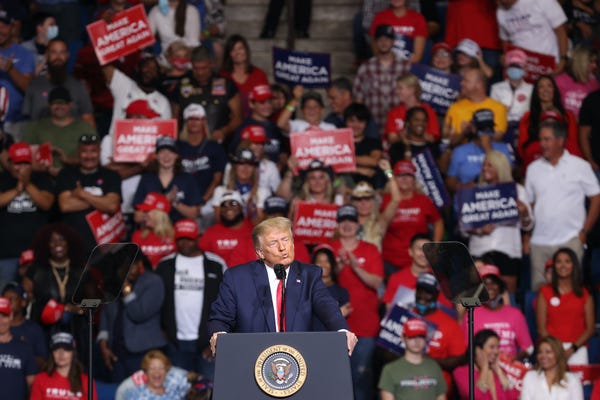 At least six people who were involved in the planning of the campaign, including two Secret Service officials tested positive.

The two Secret Service employees, one advance agent and one officer, didn't attend the rally, but had attended a meeting with other officers a day earlier.

A Marine assigned to the military unit that flies Marine One 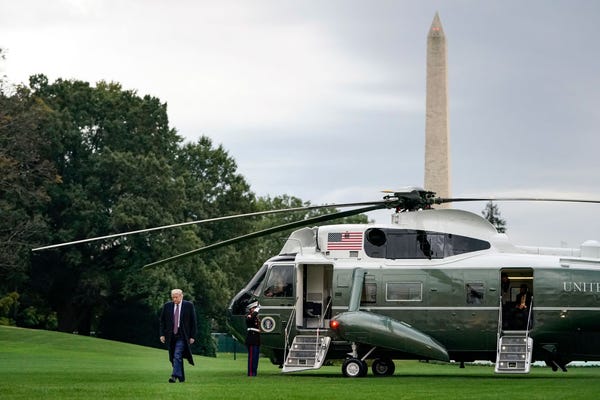 A Marine assigned to Marine Helicopter Squadron 1, which is responsible for transporting the President, tested positive in July, Politico reported at the time.

Marine spokesman Capt. Joseph Butterfield told Politico at the time that adding that squadron administers 80 to 100 tests per week.

The helicopter was sanitized after the positive test.

A personal valet to Trump 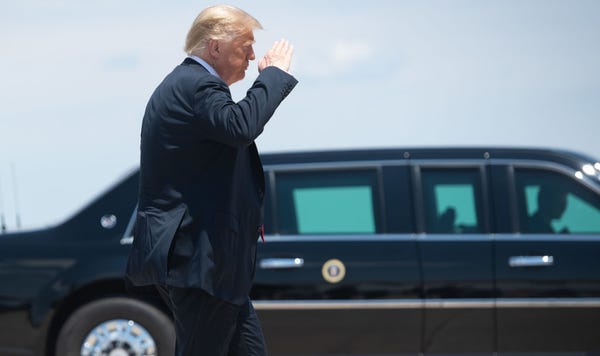 A personal valet to Trump tested positive for the coronavirus in July.

Trump was "upset" when he learned about the diagnosis, CNN reported at the time.

"We were recently notified by the White House Medical Unit that a member of the United States Military, who works on the White House campus, has tested positive for Coronavirus," deputy White House press secretary Hogan Gidley said in a statement to CNN at the time. "The President and the Vice President have since tested negative for the virus and they remain in great health."

The valet was not named publicly. 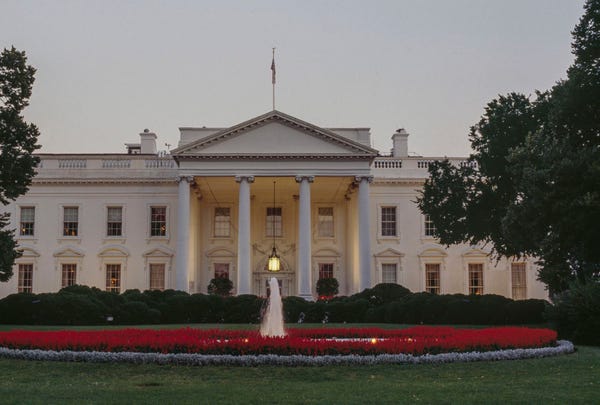 A White House cafeteria and eatery were closed in July after an employee tested positive for the coronavirus.

An email was sent to the administration at the time, informing them about the case, but also indicating that the risk of exposure was low because safety precautions had been taken.

"There is no reason for panic or alarm," the email read, according to CNN.