There is a wall of mewling cats in the quarantine room at The Lost Dogs’ Home in North Melbourne. A coop door swings open to reveal a mottled female, nursing half a dozen tiny kittens, barely 48 hours old.

It’s cute, but the scene is a grim reminder of what’s going wrong across Melbourne’s moggie population: Rangers dropped this cat off with no name, no registration, no microchip – and pregnant. 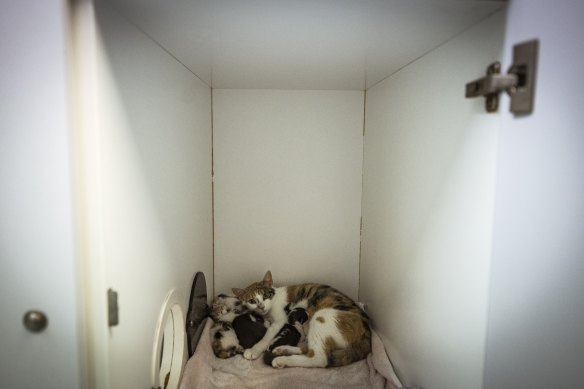 An unnamed stray female cat with six kittens in quarantine at The Lost Dogs’ Home.Credit:Chris Hopkins

The age of this ‘Queen’ – the name for mother cats – is also unknown, but vet staff estimate she’s barely out of kittenhood herself. She weighs only one kilogram.

“There’s babies having babies,” says Liz Walker, director of operations at the home.

“Someone has loved her and raised her. [But] they haven’t desexed her and she’s ended up here.”

Her owner or carer had eight days to claim her once she reached the shelter. But she – like about 90 per cent of the roughly 10,000 cats and kittens that came through The Lost Dog’s Home last year – hasn’t been reclaimed. The mother and babies will need to find new homes.

This shelter, which collects cats for 15 Melbourne councils and one regional council, is facing its biggest kitten breeding season in almost a decade. Its facilities in North Melbourne and Cranbourne are brimming with 500 cats and kittens, with another 500 out in foster homes.

She is overseeing a ‘desexathon’ at the home this Friday, with staff aiming to get through a record 240 cats in the 24 hours to 8am on Saturday.

“It’s kind of scary to think about that one undesexed female and a mate, how quickly she can create a large population problem,” Wilde says.

“One fertile female cat and her mate and their offspring are able to produce up to 2000 kittens in just four years.” 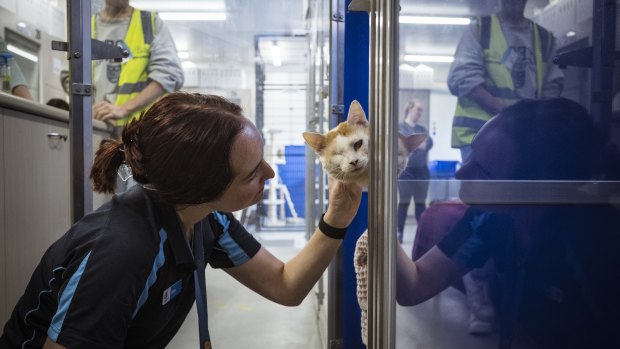 Alex Arnaboldi pets Rooster, a stray up for adoption.Credit:Chris Hopkins

The shelter had made some headway in clearing the logjam just before Christmas. Now, two weeks later it’s already at capacity again.

“We often get boxes of kittens dropped off that people have found dumped in a park or a dumpster,” says customer service officer Jenny Kisbey from behind the shelter’s front desk. It’s the front line for dumped animals.

The desk also helps reunite owners with their animals when they come to claim them, but Kisbey sees more pets come into the shelter than go home with their original owners.

“It’s really sad. Staff often take them home because we don’t have room for them all,” she said. 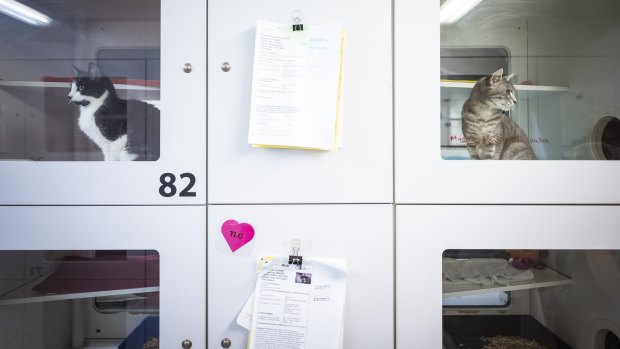 Cats waiting for new homes at The Lost Dogs’ Home. The centre was nearly cleared out before Christmas but is full again after two weeks.Credit:Chris Hopkins

Those in the home that struggle to get adopted are moved to other shelters for a new audience. Some strays, however, are so wild or distressed they are not suitable for being rehomed and are euthanised.

And despite successful efforts in the past two decades to drive down the population of lost and roaming felines, the number of cats turning up at The Lost Dogs’ Home is trending in the wrong direction.

The home’s directors are begging owners, local councils and the state government to step up desexing efforts.

“This year particularly has not been good breeding weather,” Walker says. “It’s been wet, it’s been cold. But our numbers coming in haven’t reflected that.”

The shelter’s directors believe the jump in numbers is likely a delayed effect of the COVID lockdowns, when councils pulled back local law enforcement and cat trapping services.

As a result, there are now more generations of cats out and about roaming now than there were pre-pandemic. 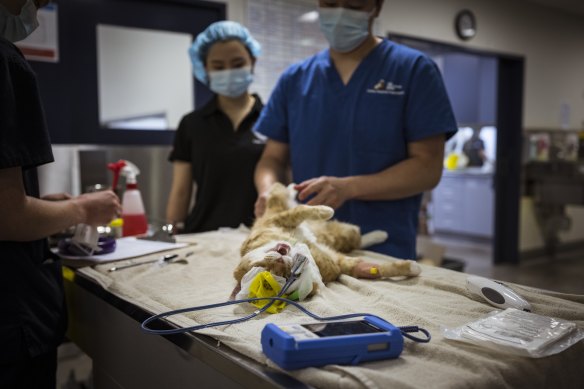 “Even though the councils did resume their trapping services last year, you’ve got a good 12 or so months where you’ve [had] cats reproducing and then reproducing,” Walker says.

“Plus we still have the ongoing issue of people not getting their own animals desexed and letting them out all throughout the day and those animals getting pregnant or impregnating.”

In the busy vet surgery at the shelter’s Frank Samways Veterinary Clinic, a chunky ginger tomcat has just been snipped by lead surgeon Ton Tancharoen.

Brought in by Wyndham council unregistered but friendly, Dr Tancharoen ssaid this stray, in his six years, could have fathered countless litters of kittens and “probably passed FIV (feline AIDS) onto a lot of cats too”.

Desexing is only a 10-minute procedure: The Age witnessed four in its visit to the shelter this week.

There are 140 shelter cats set to go under the knife on Friday, along with 100 pets being brought in by the public for a discounted fee.

Tancharoen, who is preparing for a 12-hour shift of back-to-back desexings, hopes the message gets through as it will help take the pressure off organisations like The Lost Dogs’ Home that deal with the repercussions.

“We can’t expand much,” he says. “At the moment, it’s just too much for us to handle considering our space.”