A loss in the sense of taste and smell paired with a persistent cough were among the top symptoms Australians were urged to watch out for in the early days of the COVID-19 pandemic.

Experts are now telling people to pay attention to more subtle signs, such as a runny nose, as new virus strains like the Delta variant change the way symptoms present in patients. 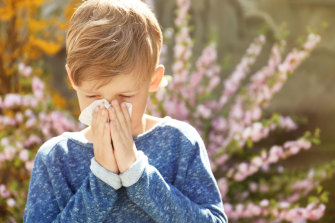 A runny nose is a common symptom among Delta variant patients in the UK.Credit:

Burnet Institute epidemiologist Michael Toole said data collected in the UK showed symptoms displayed by patients sick with the more contagious strain of the virus differed from those of other variants.

The information, collected through the app-based ZOE COVID symptom study, which allows users to log in their symptoms, suggested the variant felt more like a bad cold than coronavirus.

The most commons signs for those fully and partially vaccinated included a headache, runny nose, and sneezing, followed by a sore throat.

For those not vaccinated, it also included fever.

A persistent cough, shortness of breath, and fever – common symptoms of earlier variants – were relegated further down the list in terms of prevalence among patients.

With winter in full swing and several major Australian cities in lockdown due to fears of a Delta variant outbreak, Professor Toole said it was essential people didn’t disregard the symptoms as a normal cold.

“In winter, we’re all used to having a runny nose, a cold. But now, people should all be aware that a runny nose may not be the common cold; it may be COVID,” he said.

“That really changes it a bit because those symptoms are not very dramatic.”

The change in symptoms is believed to be the result of mutations in the virus, higher vaccination rates, and a larger proportion of cases involving young people, which show less severe symptoms.

The Delta variant – formerly known as B1.617.2 – was first recorded in India and is one of two sub-variants of the B1.617 lineage. The other is the Kappa variant, which was behind the Melbourne lockdown in May.

Perth and Peel were plunged into a four-day lockdown on Monday night after it was revealed a physiotherapist who had recently returned from Sydney had infected two people while active in the community.

A 32-year-old woman contracted the disease at a Joondalup gym on Thursday, despite having minimal contact with the physiotherapist. The third case – a man in his 30s – was infected while dining at Indian Ocean Brewing in Mindarie.

Authorities are urging anyone who visited Surge Fitness in Clarkson, Mobius Health and Performance in Joondalup, Core Wealth Financial Planning in Hillarys, and Indian Ocean Brewing at the same time as the confirmed cases to get tested immediately and quarantine for 14 days.

Year 5 students at Connolly Primary School should also get tested and quarantine.

To date, contact tracers have identified almost 2000 contacts of the confirmed cases, of which 275 have returned negative test results.