Archbishop Desmond Tutu has been described as “the spiritual father of our new nation” at his state funeral in South Africa.

President Cyril Ramaphosa said the anti-apartheid hero was a “humble and brave human being who spoke up for the oppressed, the downtrodden and the suffering of the world”.

Spearheading the non-violent resistance to white minority rule, Tutu had won the Nobel Peace Prize in 1984 and a decade later saw his friend Nelson Mandela – jailed for decades under the regime – become president following the advent of democracy. President Ramaphosa hailed Tutu’s role in seeking to heal division in the new “rainbow nation” – a term which he had coined – as he chaired a Truth and Reconciliation Commission to unearth the atrocities committed under apartheid.

South Africa’s president delivered the eulogy at the end of the funeral for the archbishop, who died aged 90 on 26 December.

In keeping with his wishes for a ceremony without ostentation, Tutu’s body lay in a plain pine coffin during the service at St George’s Cathedral in Cape Town.

Mr Ramaphosa said: “While our beloved Madiba [Mandela] was the father of our democracy, Archbishop Desmond Tutu was the spiritual father of our new nation.

“He saw our country as a rainbow nation, emerging from the shadow of apartheid.

“It was with this term, rainbow nation, that he bequeathed our new nation the greatest gift of all: hope and forgiveness.” 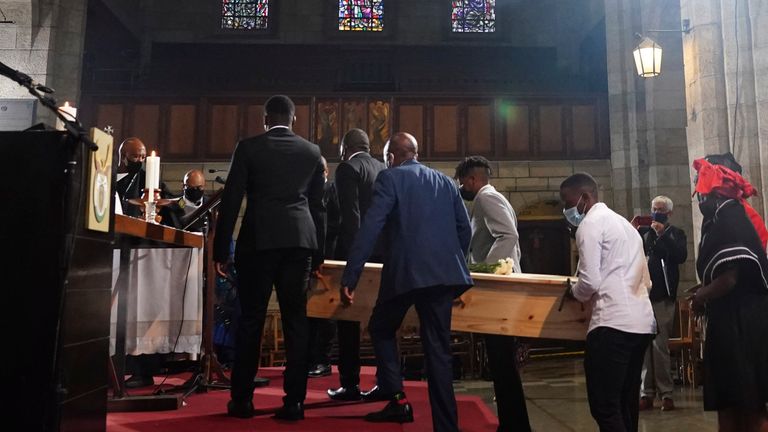 Mr Rampahosa described Tutu as a “crusader in the struggle for freedom, for justice, for equality and for peace” both in his own country and around the world.

With his campaigning on issues from AIDS treatment and LGBTQI+ rights to the Palestinian cause and child marriage, he “took up the cudgels on behalf of millions of people around the world,” the president said.

In a video message shown at the funeral, the Archbishop of Canterbury, Justin Welby, described how people globally had been inspired by Tutu.

Rev Welby said: “Archbishop Tutu lit up the world… that light has lit up countries globally that were struggling with fear, conflict, persecution, oppression, where the marginalised suffered.

“He never ceased to shed light. His light was the light of Christ, and that is why his light will go on shining.”

He described Tutu and Mandela as “two giant figures that towered over the world”. 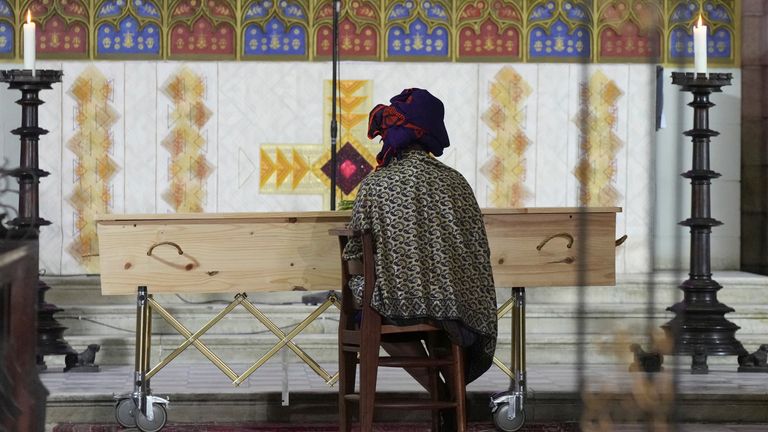 Tutu, who was South Africa’s first black archbishop, requested “no lavish spending” on his funeral and even “asked that the coffin be the cheapest available”, his foundation said.

Attendance at the event was limited due to coronavirus restrictions.

It followed days of mourning in which hundreds paid their respects by singing and laying flowers.

Tutu’s body was set to be aquamated after the funeral – a process which involves dissolving the remains in a solution, which is considered to be a more environmentally friendly alternative to cremation.