A river in western Victoria is dying, an environment group says, and the volume of water taken out of it for human use needs to be be slashed.

The group says the Moorabool River, which winds 160 kilometres from its source in the Wombat State Forest north of Ballarat to the Barwon River in Geelong, more often resembles a creek. 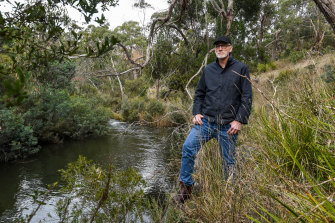 Cameron Steele by the Moorabool River near Meredith. He is calling for a reduction in water extraction from the river.Credit:Justin McManus

The group says that by the time the Moorabool River meets the Barwon, 90 per cent of its flow has been taken out for human use, mostly for drinking water for Geelong and Ballarat, and for farm dams. The group says this figure needs to be slashed to 30 per cent.

The film is being released later this month to precede the expected publication of a government road map for managing the river and others – the draft Central and Gippsland Region Sustainable Water Strategy.

Mr Steele, who lives in Bannockburn, said 30 years ago he would kayak on the river for six kilometres between Slate Quarry Bridge near Meredith and Cooper’s Bridge, but today’s scarcity of water and dense vegetation meant he had to carry the craft and walk for half the distance.

He said the river is vulnerable to drought: during the 2007-08 drought, some sections were dry. 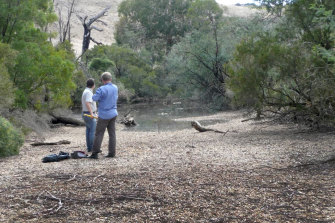 Catchment management staff on the dry Moorabool River bed in 2008 as water release from the Lal Lal Reservoir resumes following a period of drought.Credit:Ian Penna

Ecologist Alison Pouliot says in the film that up to four-fifths of the river catchment has been radically modified, with the removal of deep-rooted vegetation. This has led to erosion, with sediment polluting the river and making it harder for fish to extract oxygen.

Other interviewees call for alternative water supplies to be introduced for Ballarat and Geelong residents, so more water can flow down the Moorabool River. Options could include recycled waste water, reuse of urban rainwater run-off and a desalination plant, especially for Geelong.

Victorian Farmers Federation president Emma Germano said agriculture represented a small portion of water use from the Moorabool River, and the most use was for the growing populations of Geelong and Ballarat.

“A drying climate has resulted in less water being available for all water users, not just the environment,” she said. 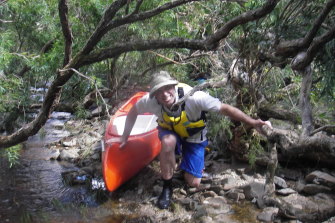 Chad McKenzie dragging his kayak through scrub along the Moorabool River near Meredith.

“The [federation] is very supportive of the government investigating alternative and additional water sources for our growing regional cities to ensure water can continue to be shared between the environment and farmers.”

The River Moorabool will screen at Ballarat Mechanics Institute on June 26 and at Geelong’s Peter Thwaites Lecture Theatre, at Deakin University Waurn Ponds campus, on July 3.

“The upcoming Central and Gippsland Region Sustainable Water Strategy will be released for further public consultation later this year to address these issues across the region,” he said.

“The strategy will set out a 50-year plan for the sustainable use and management of water resources, including in the Moorabool River.”